Fantastic collection of history and kit !

So enjoyed a quick scan back over your RC, Keith. You deserve a medal for migrating all that overnight … and that is now easily done

Forgot how intensive you road case was Keith.
Next time I go gear shopping I’m stopping off here first for ideas.

That’s a heck of a gear rundown. A lot of good stuff in your arsenal. There isn’t any kind of guitar sound that you can’t make. Good times! 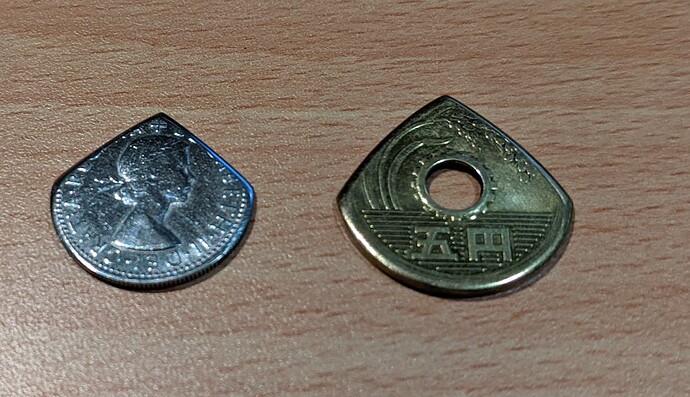 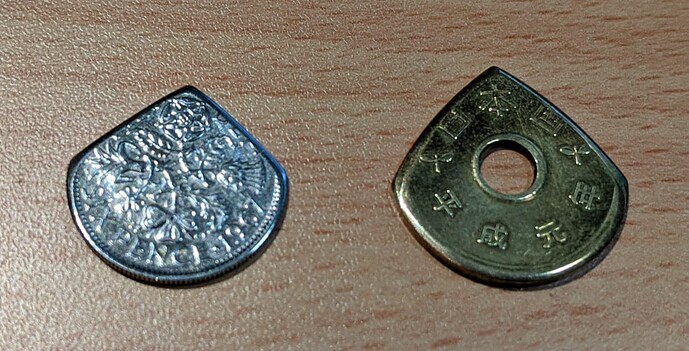 I picked (pun intended) these up from Highland Plectrum Co recently simply because they looked cool. They sell coins which have been machined into a pick shape.

The silver coin is an English sixpence (like Brian May uses) and it’s the year I was born.

The other one is a 5 Yen coin. I got this because I spent some time in Tokyo not so long ago, and I was aware of the cultural significance of 5 Yen coin.

For those that don’t know, the main religion in Japan is Shinto, and in Shinto culture, 5 Yen is what you give to the spirits for good luck. When people go to a Shinto shrine to pray, 5 Yen is typically what they donate.

As it turns out, the sixpence really is too small (for me), being smaller than a Dunlop Jazz pick.

The 5 Yen coin turns out to be much more usable. It’s bigger, and the hole adds grip.

TBH I don’t actually use either of them that much, but they are a cool thing to own.

I have a box of metal and wood picks (presents of course) that I have never used. Always been too scared to use the metal ones, as until recently I have always been heavy handed. But the wood ones may throw out some interesting tones. Your post prompts me to give them ago…after checking the spare string store first !

Congrats on your exam pass Keith. I like the red headstock. You’ve sure had some gear. Did you daughter give the guitar back?

That was a few years ago now Maggie, but thanks anyway. I started working towards taking grade 6, but life got in the way of preparations and I never felt I was quite ready for it.

No, she still has the HB Mini and still keeps threatening to use it to learn to play. She also still has the Pacifica. Her husband is musical and has used both of them a bit, as he’s quite keen to learn to play the guitar. He’s a bass player and, at the moment, he struggles with guitar a bit, but he’s been trying to learn using Rocksmith which I think is a bit of a dead end, especially for guitar.

My daughter has made noises about them learning together, her on the HB Mini and him on the Pacifica, and I’ve been nudging them towards using Justin’s lessons We will see, but I won’t hold my breath. 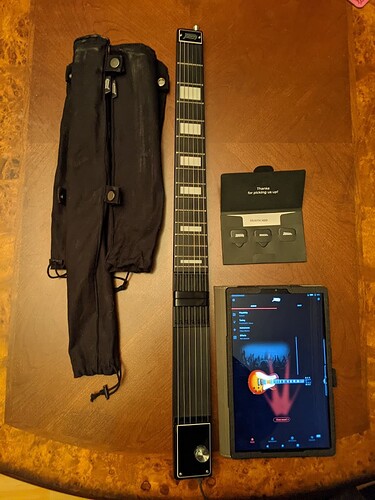 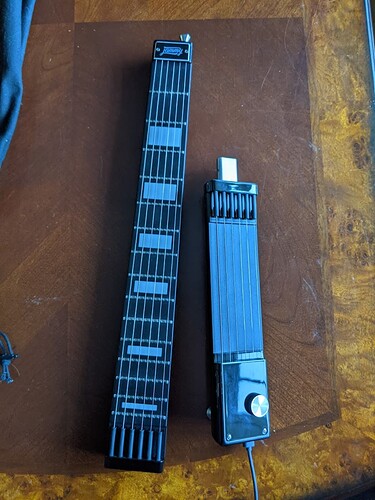 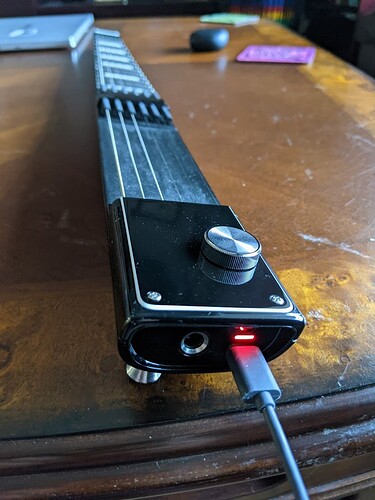 I was given this by my friend, Randy, who was a kickstarter for this. This is the beta version and, when he got the second version, he gave me the first one to play with.

It’s a guitar synth and midi controller with Bluetooth connectivity. It has onboard sounds which you can switch between using the knob on the front, or using the companion app, which you can also use to tweak settings.

The unit is in three parts.

The main body, which is a clip-on plastic part, is missing as he gave it to me at a conference in Berlin about 3 years ago, and he had forgotten to pack that part. The full thing looks like this: 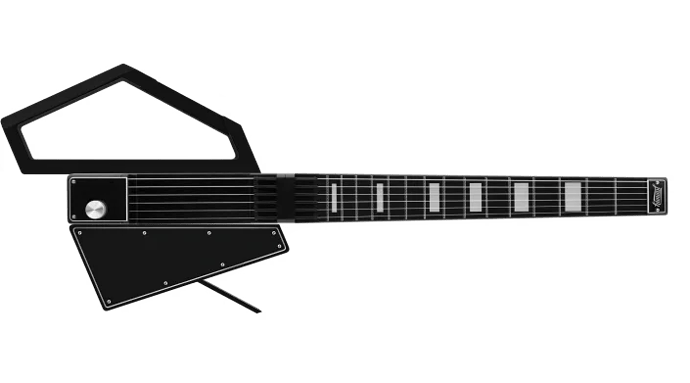 He’s supposed to be giving me this part next time we meet, but my travel with work, and the pandemic, has meant we’ve not been able to meet since then.

The other two parts both have fake strings and sensors, one for strumming/picking (and contains the battery and main smarts), and the other for the fretboard. There’s multiple sensors on each string and it is supposed to support bending, sliding, hammer-ons and pull-offs, fretboad and palm muting, etc.

It also comes with a bag for all of the part. When collapsed down and in the bag, it’s easy to carry and will easily fit into an airline overhead locker.

I’m not sure if it’s because I have an early model, but it’s not always that successful. It feels more difficult to play than a real guitar as you have to be more precise or it doesn’t seem to pick up what you are doing.

It has, more recently, has an app and firmware upgrade which seems to have made it more useful, as you can now fine tune each aspect of the unit, such as sensitivity to bending, and there’s a bunch of “playability presets” you can chose from, like “shredding” or “clean picking and strumming” which optimise the controller for your playing style. I’ve not really full explored these yet.

You can also now use the unit as a MIDI controller, including MPE support, and the sensors can be used in all sorts of very un-guitar-like ways to manipulate an external synth. Again, I’ve not really explored this.

One nice feature is the app will now record performances as MIDI, and you can then transfer them to a DAW or other MIDI tool, and mess around with them.

There’s some stuff on the new features on this video: I will try to find some time to play with it some more since the new software dropped, but my impression is really not great. Randy was quite dismissive of it when he gave it to me, describing it as “a bit of a toy” and I tend to agree with him.

You do share the most fascinating, and on this occasion curious, things Keith.

Enjoyed the video, I think Bill Bailey should have one of these.

But on the serious side I like the way it functions as a midi input and the interface app sounds and looks trick. I have to say I won’t be gassing over one, despite saying that,

Always intrigued by Brian May using a tanner as a plectrum.The notion of using a metal object that close to precious wood surfaces scares the hell out of me.
Oh absolutely great log, btw.

Always intrigued by Brian May using a tanner as a plectrum.

There was a Queen documentary recently shown in the UK, where he was asked about this and he demoed using a sixpence and a normal thick pick. The sixpence gave a much brighter sound and because of the milling on the edges (ridges) he said it can be used to strum without needing to dig into the strings so much, allowing slightly faster playing. It also gives better feel by not flexing.

My daughter has made noises about them learning together, her on the HB Mini and him on the Pacifica, and I’ve been nudging them towards using Justin’s lessons

Wouldn’t that be marvelous.

Back in 2020, when I was visiting Singapore for business, during the height of the pandemic, I posted: 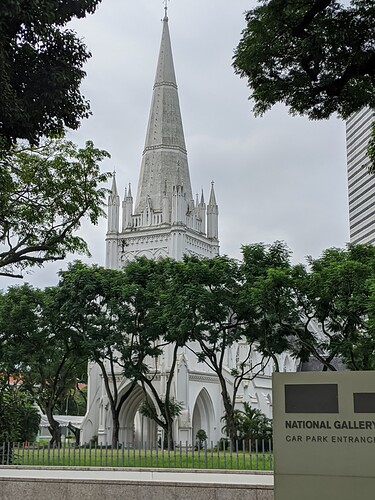 As an aside: I was hoping to get to ring the bells at St. Andrews whilst I was there. St. Andrews is famous in bell-ringing circles for being one of the few working bell towers in this part of the world, and because it very recently had a brand-new set of bells installed which, by many accounts, sound and feel great. Unfortunately Covid happened, and bell-ringing was one of the first casualties of the restrictions.

As I say, I have been back in Singapore for work and, this time, I managed to get in touch with the local ringers and have had a couple of tower visits including a look around the pristine belfry, and some ringing with the local band. 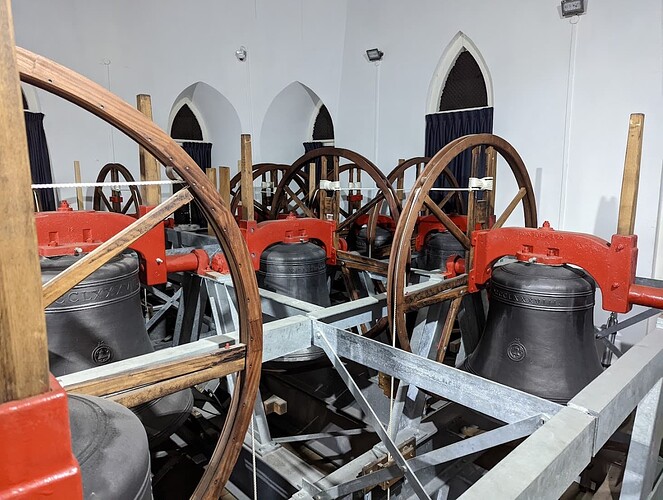 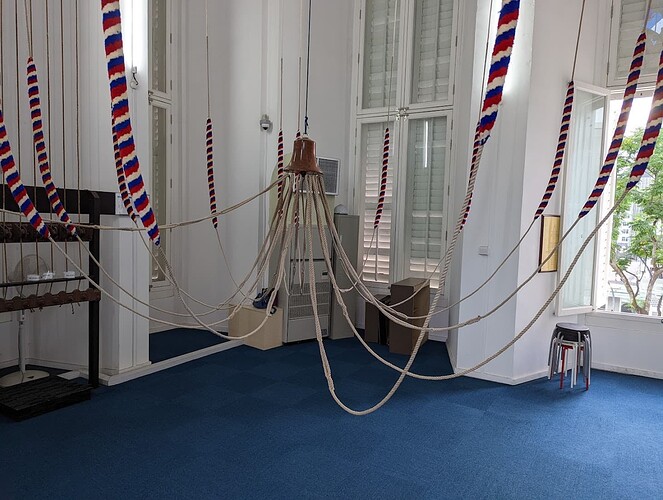 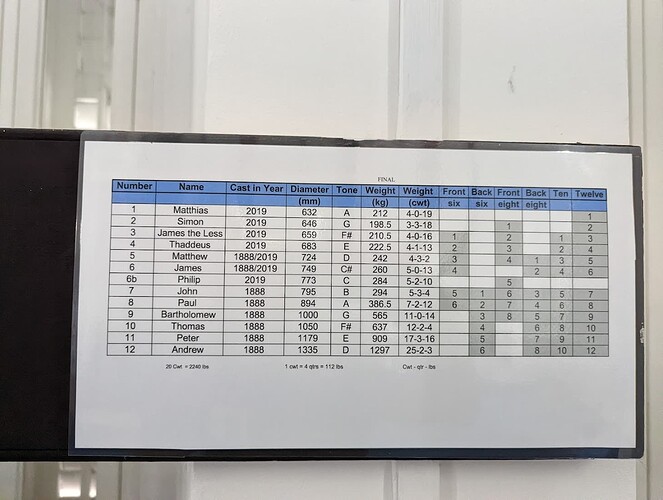 Currently, I’m back in the UK for a few weeks but, when I return to Singapore, I should be ringing with them more regularly.

I should also add my latest acquisition: 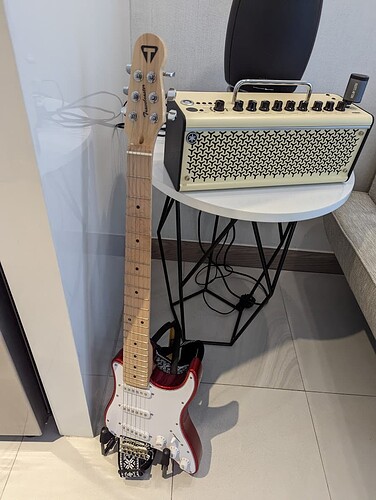 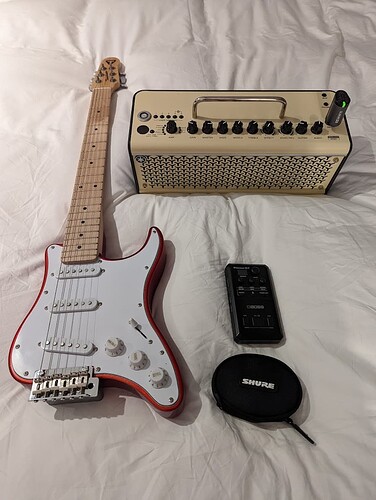 This is a cut-down electric guitar designed to be easy to travel with (apparently it fits into the overhead lockers of most airlines) and, yet, to provide most of the capabilities of a full-sized electric guitar, including the proper neck/scale length.

In this respect, it delivers. The neck really does feel just like a normal electric guitar, and the pickups sound pretty good. It even has a whammy bar. It’s quite lightweight and comes with a gig bag. As an option for travelling, it’s hard to beat. Of course, you need an amp with it, but I’ve been using it with my Yamaha THR10ii (as in the photo which was from the apartment I was staying in) as well as with my Boss Pocket GT.

It does, however, have some downsides:

One is that, because they have cut down the size by removing a large part of the body, compared with a normal Strat, the weight distribution is towards the headstock, so you get a lot of headstock dive. This is mostly when standing up with a strap, but you get some whilst seated too.

Another is that the jack socket to connect to the amp is around the back of the guitar, which means the cable catches on your leg a bit. I’m using it with a wireless transmitter which exacerbates the issue. It’s a minor pain rather than being a show-stopper.

The biggest issue for me is that the part of the guitar body where you normally rest your arm is missing. For me that means I end up resting my palm on the bridge, which often results in unwanted muting. I also feel that my arm is in the wrong position to play normally, which makes it feel more awkward to play.

I think as an option for travelling, it’s great and I’m going to keep it (at least for now) but it looks like I might be doing a little less travelling that was anticipated originally, so when I get back to SG in a few weeks, I may consider getting a more conventional electric guitar once I have settled into my new accommodation, on the basis I can probably sell it second hand when I eventually leave. 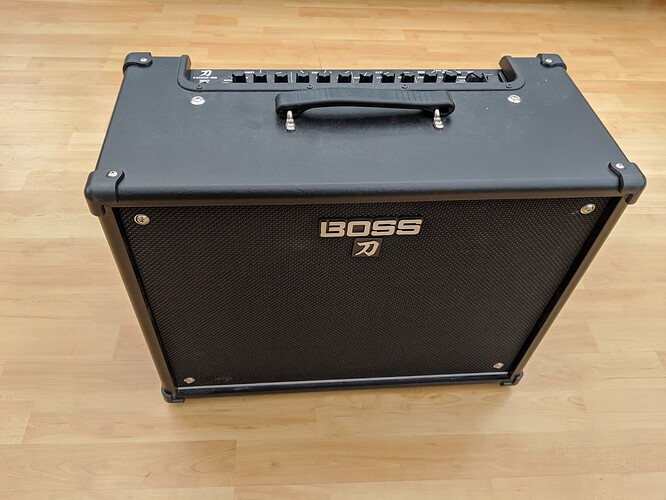 I bought this a few years ago to put in my home office so I could do some more practice more during the day.

Small update: I just sold this. A last minute decision.

A friend of mine who is a guitar teacher messaged me yesterday to ask me whether I would recommend the Katana still, as he had a relatively new student who was keen on getting an amp. I suggested looking on the second hand market, and then suggested I might be interested in selling mine. 24 hrs later and it’s just been picked up by a new, happy owner.

Why did I sell? Because I’m simply not using it at the moment because, most of the time, I’m 11,000 kilometres away. At this point I have no idea when I will be back home in the UK for any length of time where I might use it, and I have other amps I can use when I am.

So I would rather sell it on to someone who will use and enjoy it.

Totally agree Keith, it’s a shame to see a piece of kit lying on the shelf for an indeterminate time.

I am sure I saw a suitable cable in the Thomann catalogue, though latency might be an issue !