Quick simple explanation but all 5 CAGED shape can be played as Major or Minor, in fact any of the 7 modes. Here’s an example which may help. But you need to understand the relationship and what the root notes are. Minor being built off of the 6th interval of the Major/Ionian scale. 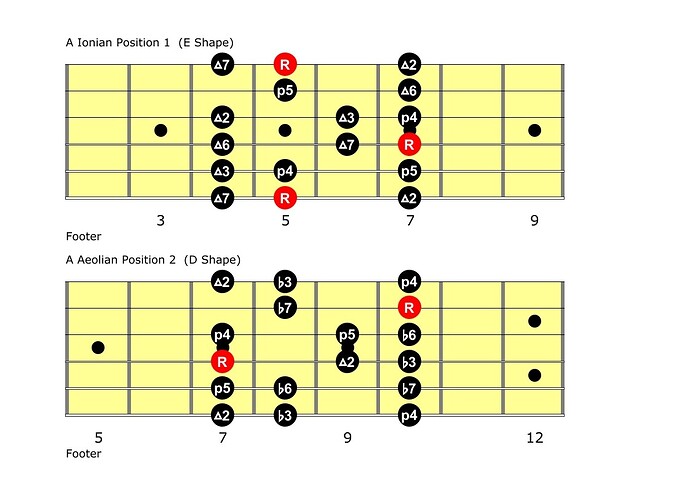 I’ll try and add more later but tied up with a few things at the moment.

I should add that the Major Pent that you are playing 3 frets down is taken from the G shape Major scale shape. So you really need a good understanding of the CAGED systems to see how everything dovetails together.

Thanks Toby
Yes I’ve got a good understanding of the caged system, the chords that go with each shape, major and minor etc. Been putting in a bit of work in on it lately.
My question really related to the movability of the scale patterns.
Eg: I can play pattern 4 of the minor pentatonic scale starting on 7th Fret 5th string and I’m playing the E minor pentatonic scale.
Simply by moving the same shape towards the neck by 3 frets I’ll be playing the E major pentatonic scale.
I thought the same principle would apply to the major scale and natural minor but it’s seems not…

Jason - I have an old, old post from back in the forum days that might address your question directly. I’ll see if I can speed up and transfer it here for you.

Simply by moving the same shape towards the neck by 3 frets I’ll be playing the E major pentatonic scale.
I thought the same principle would apply to the major scale and natural minor but it’s seems not…

I won’t try and steal any thunder from Richard but in the meantime this may make what I was saying clearer by using your example. The shapes can be moved and a minor can then be played as a Major but the key is the root note. These are the patterns you referred to and as you can see both are built off the Root E 5th string 7th fret. Same shape but a different launch pad, in respect of its position “within” the scale shape. 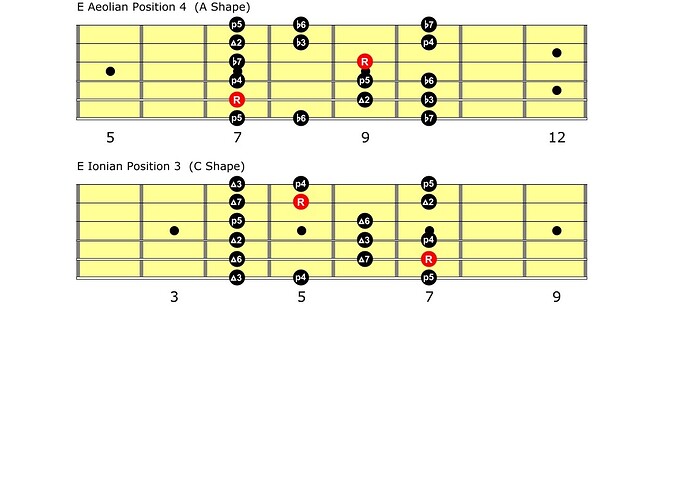 As you can see from the labels, we’re drifting into the territory of Modes, Cue Mr Coles.

Hope that helps for now.

Great
Thanks Toby
I think I understand…

Much appreciated Rick
Thank you

Let’s start with C major scale 8th fret G shape.
This way you can move both ways.
First off you said you know the CAGED system so I’m assuming
you do.

The G shape major scale starts with the root note under pinky
E string and the goes to the A string 5th fret.
If you start the same scale pattern with your index finger on the
Note A (5th Fret) you are now playing A natural minor.
A is relative minor to C
Now put you index finger on the C (8th fret) and play the same
pattern as you did for Am. You are now playing C natural minor.
Now play the same patten but start with the root note under
your pinky this is Eb Major. Cm is relative minor the Eb.

You are moving from the G shape for Major and E shape for minor.
Same Notes different Root.
You are also switching from Relative minor Am(going down the neck)
To parallel minor going up the neck Cm. When I learnt this it was
called Front door back door. If you start with the index finger all
the note are forward of the root. If you start with the pinky all
the notes are behind the Root note.

Thanks very much for your time on this Rick
Really appreciate it.
I will endeavour to get it clear in my head.

If you cross reference Rick’s front door back door analogy with the two diagrams I posted and what I said about where you launch from. The top diagram would mean starting with your index finger on the root and the bottom one starting with your pinkie. Its all about the root.

Just been playing around with this idea Rick.
It’s all falling into place.
Just wondering…you said the G shape Is movable both ways, appears to be the same for the C shape major scale pattern.
With pattern 1 of the major scale I’ve found the way to move it is to start on the octave with my first finger.
Eg: pattern 1 A major scale my pinky lands on the octave, 4th string 7th Fret, the note A. If I replace my pinky with my index finger and continue the same pattern I’m playing the A minor scale… I think?

All of the 5 patterns are movable. I think you miss understood me. I used the C major scale
G shape (pattern 5) so you can move your hand both ways with out running out of frets.

You can do the pinky to index trick with every pattern they all link together. Some are easier
than others because the have the same shape.

There are only 5 shapes for both the Major and minor scales using the CAGED system
The only thing that changes is where the root note is.
Every Major scale has a Root note that will land under your pinky. If you play that exact same
pattern but start with your index finger on the same string 3 frets down you are now playing
the Relative minor.

Eg: pattern 1 A major scale my pinky lands on the octave, 4th string 7th Fret, the note A. If I replace my pinky with my index finger and continue the same pattern I’m playing the A minor scale… I think?

No you’re just continuing the next pattern of the A major. And you’ll need to adjust for the B string.

Jason you’ve just discovered the “never lost scale”. When you go as far as you can on the e string go back down that shape towards the E string until you hit the lowest root. Switch index for pinkie and start again. Tip - rather than put your pinkie on the octave root slide into it with the index and you are ready to go on the next pattern.

Toby you need to explain the “never lost scale” is one internet teachers explanation for
“Every pattern links to the next”. Others call it scale extensions.

“Every pattern links to the next”.

Jason take what I say with a pinch of salt. Rick defines more eloquently what I said. But as you have found each root is a link to the patterns either side of it. And as the CAGED system shows they are all linked up and down the neck