Medley of songs I've learnt in the past 3-4 months

A suggestion was made in my learning log (link below) to post my five month progress video here for feedback.

Rkr87’s Learning Log - Apr 22 Introduction Hello all, it’s been 3-4 months since I posted my last update so I thought I’d quickly give an overview of my progress since January. Unfortunately, due to some personal issues I haven’t been able to dedicate anywhere near as much time to practicing as I would have liked. As such, I haven’t yet started Grade 2 of Justin’s beginner course as I had hoped/planned. Instead, I dedicated what time I did have to practice towards improving what I (and others)… Thanks in advance.
Ryan.

That was great and a compilation you should be pretty pleased with. For 3-4 months in this is very very good. I would just caution on rushing ahead too quickly. I thought your acoustic playing was pretty strong (good clean chord changes). Your playing on electric was a little rushed and unprecise which means some of those single note licks etc. don’t sound or flow as they should. That though is just inexperience and as long as you continue to practice they’ll improve.

I would spend more time on all of the techniques you’ve covered here and try and play things more slowly…then speed up. Tempo overall was a little variable in spots but it’s difficult to tell without seeing you play a full song.

Extreme more than words - Pretty much spot on but probably just want to focus on keeping that tempo even (maybe use a backing track or metronome to assist).
The Who/Radiohead - You need to slow down a little so each of those notes are clear on their own. Also look at the positioning of your hand and thumb in relation to the soundhole.
Zombie - Was absolutely fine but probably played a little too hard. I can see you’re trying to add dynamics by playing harder when you get to the overdriven part (in the original song) but you actually need to play softer in the intro (it’s relatively quiet in the original and during the verses) and then play just a touch louder when you go into the bridge sections. I’d also use pumping 8s for the bridge sections.
Knockin on Heavens door - Sounded good
Enter Sandman - Just needs a bit more practice as you said. Learn it slowly first then speed up.
Whats Up - Sounded fine but you might want to look at open chords uncapo’d which will make it more like the original.
Wonderwall - This sounded almost spot on but the second part of the strumming pattern doesn’t sound quite right (have a listen to the original). You might want to revisit this bit.
Money - Pretty good just needs some time on those bends.
Last Resort - Looks a little rushed.
RU Mine - Difficult on acoustic I’d try this on electric.
Plugin baby - Good start

What a fine showcase of your progress, Ryan. It was also sounding pretty good to me.

Nothing specific to comment on other than to check the strumming pattern on What’s Up, I think you were cutting each bar short by half., I think (from memory) it goes D DU D DU D D U U D, which you could consider either two bars of 1/8 notes or one bar of 1/16 notes.

Look forward to more from you … picking, strumming or rocking

Great stuff Ryan especially as you are only on 1st grade, wow that is some really good skill, most likely you have some previous experience before learning with Justin but consolidation of what you know really paid off after doing Justin’s G1.

Overall really good, Jason picked up most stuff I agree with. I will comment on songs I know how to play to share an experience of my own perhaps:

Overall hats off well done you are ready to move on to G2 for sure! 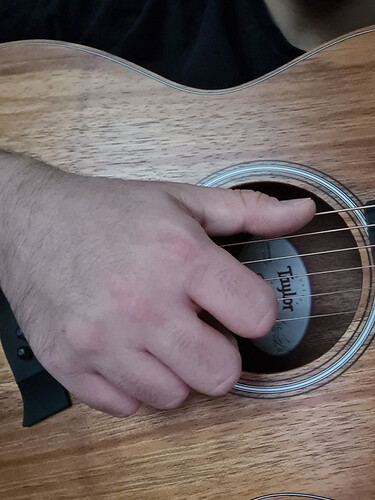 I can’t add anything really Ryan as I’m still a beginner myself but that was a great compilation of songs and your playing is mighty fine. Well done.

Thanks for the great feedback!

I’ve actually been playing for 5 months, the 3-4 months is since I last posted a progress video. I completely agree on my electric playing, I only got the electric a couple of months ago and spend much more time playing the acoustic (I enjoy it more).

I’m going to spend some time perfecting the songs I know now rather than learning new ones. I picked the songs intentionally to introduce new techniques (slides, bends and hammer-on/pull-off) in to my playing.

I’ll take your advice and slow them down and play along with a metronome.

Edit: sorry, what are pumping 8s?

Yes, you’re absolutely right. I got confused watching justin’s video as he mentions in the chord section of the tutorial 1 bar of G,Am,C & G again but on the strumming section mentioned it was a 2 bar pattern so I assumed the chord change was half way through the pattern. I’ve just watched it back though and I need to think of it as 1 bar of 16ths for it to make sense to me haha.

Thanks for the feedback! I’d already packed away the electric when I came to do RU Mine - in all honesty I’m not a huge fan of the electric, even the songs I played on the electric for the video I practiced on the acoustic. I’m sure I’ll grow to love it with more experience but at the moment I struggle to get stuff sounding as clean as I do on the acoustic.

You’ve sent me that pic before, I have tried to reposition my hand to allow my thumb to be aligned with the strings but I find it incredibly uncomfortable - is it likely to cause me issues if I continue playing as I am? If so, I’ll force myself to get used to the new position.

Don’t force itself onto you too much, it’s a piece of advice which can help, not a must. It helps with those slaps you did with More than Words to be more noticeable and prevents fingers clashing with your thumb, but as long as you can play the song clean that’s all good!