If you can have some fun with the Triads grips you already know, explore these ones too!

The download file for the Minor Triads (345)shows grip one keeping the 3rd in the same spot (even though it says 3b) and moves the root and 5th note up 1 semitone. Is this an error on the page or am I missing something? I would think moving up the root and 5th would change the chord completely. For example, if it’s a G chord then moving the root and 5th up a semitone would turn it into a G#min. Correct?

Its moving the 3rd down one semitone to flatten it.
Making a minor or b3rd.
The root and 5th stay in the same spot.

Yes, that’s what should happen to the Triad. It’s not what the files in the resources show. Look at the (345) major triad grip one, then look at the (345) minor triad grip one. In major triad one grip, it shows Fmaj triad (F root, A 3rd, and C5th) with an E shape triad. Then, when you look at the minor grip one, the 3rd does not flatten. It stays on the A, while the root move up to the 4th fret of the 3rd string (F#), and the 5th moves up to the 4th fret of the 2nd string (C#). That would become a F# minor triad would it not? (I erroneously called it a G# minor triad in my previous post).

Sorry to contradict you, but the diagrams are correct. What’s creating confusion on your part and could probably be highlighted on the diagrams is that the position (fret number) is not fixed. These are general major/minor triad diagrams that are movable since neither of the strings are played open.

The complete fretboard diagrams at the bottom of the page are probably less ambiguous in this regard. 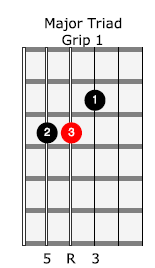 As you can see, in the case of the minor triad grip, the 3rd is one fret “further down” from the other two notes, meaning that it is indeed flattened by a semitone.

@Jozsef has it exactly right. The neck positions are not fixed so the triads are non-specific shapes that can be played anywhere on the neck and the resulting name depends on where it is played.

Thank you both for clearing that up, it answers my question. It was confusing because I was comparing the minor to the major on both documents and seeing the root note change frets. Knowing now that the diagrams are just there to show the triad forms and not for direct comparison of particular major/minor chords helps exponentially. Thanks again, cheers.

The Major Triads 345 PDF has a minor error with the diagram for Grip 3 - the diagram lists finger 1 as playing all three notes, when obviously you would use finger 3 on the 5th string and finger 1 to bar across strings 3 and 4.

Hello @Timobkg and welcome to the community.
This is the error:

Thanks for the alert. I will report this.
Cheers

Hi there
Triads 123 have Grip1 on the first, Grip2 on the second, Grip3 on the 3rd string of that set of strings.
Triads 234, 345, 456 do not follow that pattern.
I do not find the parallels in Grip1, 2 and 3 concerning the different set of strings, if there are any.
Sorry for my english and thanks for your help
Thomas

These triad shapes provide a rich food for thought/source for practice, it’s really worth revisiting them from time to time.

Regardless, tinkering with these triad shapes is very entertaining.

They certainly are a rich food. I’ve made them a central part of my practice for several months now on a daily basis. I’ve found not only are they great to use, but moreso they have been, and continue to be, significant teaching tools regarding learning and really opening up the fretboard, learning arpeggios, chord tones, barre chords/variations, making up melodies, the scale- chord relationship etc. The flow on effect is enormous. They are invaluable I believe.

I just noticed papa smurf standing on the Marshall amp

I think I made a discovery (in the sense that it’s new to me) while practicing these triads.
I am attempting to put it into words to check my own understanding:

For any of these triads, I can turn a major triad into its relative minor triad by moving the major 5 note up one whole step.

Does this make sense? And is it correct?

For C major to become A minor, the 5th note (G) must be changed to a note a tone higher (A).

For D major to become B minor, the 5th note (A) must be changed to a note a tone higher (B).

For G major to become E minor, the 5th note (D) must be changed to a note a tone higher (E).

Notice that the 5th transforms to become the root note of the relative minor.