I’m interested in creating (non-professional) multi-part or layered video-audio recordings eg the typical rhythm track with solo part over the top but with video of both as well as audio.

In GarageBand or Logic etc I can record and layer multiple audio recordings but I can only have a single pre-recorded video channel.

Is there a tool or technique to record multiple takes of both audio and video either in Logic or in sync with the Logic takes?

I’ve tried recording video separately and editing in eg iMovie to sync a picture in picture but found it really painful to get the audio and video to sync.

I like the fluid workflow in Logic and am hoping there is an approach that is similar and doesn’t involve a lot of post-processing in a full video editor (but I suspect that is the case…).

Hope the question makes sense and that I’ve posted in the right area (I wasn’t sure if it should be here or 💻 Software - JustinGuitar Community but I don’t think I can now move it sorry!).

I don’t think there is a “magic” way of doing this and I don’t think I’ve seen many people do that on here either so I think you will need build separate audio/video tracks and then pull them together in a video editing app. I think the key is to make sure that you have a count in on BOTH videos which you can then line up in the video editing app.

So thinking about how I would do this.

I think that is how I’d do it…but someone might come along with other suggestions. The garage band bit is exactly the same approach you’d take if you were JUST creating an audio track in a DAW.

That workflow makes sense and I would guess I would do something similar using, vox, rhythm and lead input as separate input via AI in my DAW (Reaper) while simultaneously recording the “performance” videos using OBS. But you would still need a video editor to pull it altogether and that will obviously need careful synchronisation.

What I might do differently, is to record the rhythm, lead and vox etc as DI audio into OBS to capture sound and video. Then use each video as the DAW input and mixing like you would a normal audio project. You should be able to then (certainly in Reaper) create a video off of one selected track but with the audio from the Master. But you would still need to blend and sync the other videos.

@DavidP is likely to have some input and possibly @LBro but I certainly recall @balamuthiahv doing a video a couple of years back that was pretty well synced and had at least 3 different video feeds, so Bala could shed some light here as well.

For the video side I use HD Movie Maker Pro that has all the facilities to do this type of project.

Not too much for me to add to what Toby and Jason already shared.

My approach to produce such a video (which I did late last year), was pretty much as Toby described ie routing my audio through Reaper and into OBS to record the three different parts I wanted me playing in the final video.

Previously I have synced two audio sources in Reaper by ear. First I make sure each audio source is at the same level. Then I pan the two hard left and right. Then zoom in and enlarge the waves forms. Finally drag one to be aligned with the other using both the waves forms and listening. When aligned then you hear a single source in the centre, rather than a slight echo or a noticeable delay heard in the left and right ears.

I don’t think there is an easy way to do this with simple webcams/phone cams and simple PC software. Will take being a little bit meticulous. And making sure you have some reference/count in to sync on helps. I use 4 snare hits for that purpose.

An advantage if your Video Editor can automate the sync.

@DavidP That’s a definite positive on the auto sync!

Are you referring to this one David ? 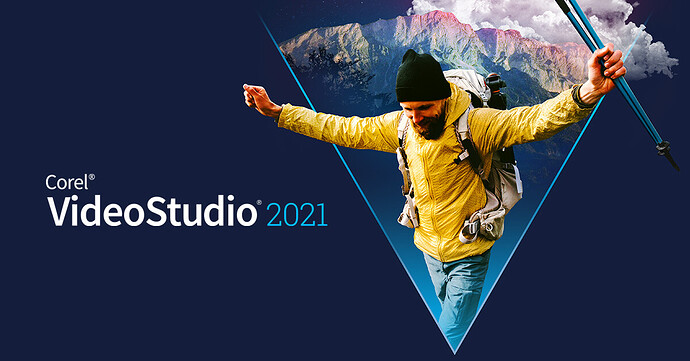 Turn your life’s best moments into movies with VideoStudio Ultimate 2021! Get creative with instant templates, an expanded collection of effects, powerful color grading, video masking and more. Get your FREE trial.

Thanks all for the detailed replies! Much appreciated. I will explore (but not too much to detract from playing music…!

I like the idea of using OBS - I could potentially even use that like a video looper with a screen capture from the previous video and overdub with a live camera… Its also nice as I can pull in MIDI data and effects / screens if I got that advanced. But more likely the video edit approach as you’ve suggested.

An advantage if your Video Editor can automate the sync.

I’ll have a look to see what equivalents there are for the Mac as I think those editors are Windows (but look good from a feature set to aim for).

Thanks for the suggestions and help on workflow.

The other cool thing (I think) I did with OBS was to film a part with two cameras to have an inset of a closeup.

True. If you haven’t tried it I encourage you to try the audio approach I described. That made it a whole lot easier.

Your video looper idea will work as you can combine an already made recording with one you are recording. Might just need to look at how your audio outputs/inputs will work in that situation. That would possibly be the “simplest” solution although you are then limited on what you can in terms of tweaking the sound (the advantage of pulling it in to your DAW).

If you haven’t tried it I encourage you to try the audio approach I described. That made it a whole lot easier.

(the advantage of pulling it in to your DAW)

Yep - I was assuming in that instance to still drive the audio into the DAW and then pick it up in the loopback to OBS to capture. I hadn’t thought to skip the DAW entirely but you’re right - its then a simple overdub assuming levels etc are ok ‘live’.

I’ll have a go mostly likely along the lines have you’ve each outlined with the editor approach and upload something to share! Thanks again!

I hadn’t thought to skip the DAW entirely but you’re right - its then a simple overdub assuming levels etc are ok ‘live’.

You can rehearse in the DAW to get the levels right or to your liking without the need for FX, so everything is set up audio wise for OBS. ie get the AI input balanced in isolation

Hi,
I have access now to 3-4 cams for recording all at the same time. Yet what is being talked about here is capturing perhaps the main track real time in both audio and video, then blending in additional takes. In my experience it really helped to use the clap methode for synching both audio and videl, however I have a different take on the “clap” of the hands part. Instead of that, up front of the desired time segment of audio and video I record a drum loop for the entire length of the song. The start of this drum loop has a loud cymbal crash maybe 2 bars prior to the start of the song. Every cam I use is set to record audio and takes in that cymbal crash. This allows a reference point for both audio and video.

Since one can see and hear the cymbal crash in the video’s audio and hear it in audio, while having the graphic display on screen, it is pretty simple to line up and sync all sources. For sure I would be keeping each audio and video segment together as a set. I find it most easy to sync to the audio cymbal crash by viewing it in the video editor. To me a good video editor is a must. They are to video and to a lesser extent to audio, what a good DAW allows to edit audio. In fact my video editor is getting stronger on the audio side too.

In all this it should not be lost that we are talking perhaps 3 minutes of “media”, more or less in length. That is fortunate as longer media items can get out of sync with each other as the media progresses. In our case it is short enough that “drift” in the media items won’t affect the outcome much. But in movies and long running media, one needs what the pro’s have and that is a timing signal. In that case the media items are constantly checking and being adjusted to stay in sync.

All the best and maybe try the drum hit or cymbal shot as a timing reference mark. It made life easier on this end.

Hey all. Sorry for the late reply. Most of what I do has been suggested already. But in simple terms, I have a camera recording me with audio and simultaneously have my guitar and vox fed into my DAW through my audio interface. If I used mic to record the amp output, I had another setup for vox done separately. The challenge I usually have is to manually and visually sync the waveform from my DAW output and the audio waveform from the video (while both are enlarged) on a video editor.

My bassist and drummer used to send me just a video file with camera audio. So I used to import the audio into my DAW to reduce external noise and balance the volume of the different audio inputs.

On days I was lazy, they were slightly out of sync (mostly the earlier videos) and on other days, I was patient enough to get a well synced video. Now I didn’t cover how I layer the videos (bassist, drummer and me). That’s a loooooot of the work. But again simply put, create a black screen with final audio, then add video 1 and sync audio, then video 2 and 3 in subsequent steps. And with the final video, I remove the audio all together after I add and sync the mastered audio.

I hope I made sense. Sorry if not. I’m half asleep