Birthday soon, so Mrs T has got me a Harley Benton JA-60LH, a hard-tail jag style guitar.
It was a return to Thomanns, so the price dropped, which is always a good thing.
Ever try finding a left-handed hard tail offset??

It arrived really out of tune, but that was easy to sort.
There was also an earth issue, which I think is sorted now - I removed the screws to take off the plastic protective covering as it was under everything including the pot nuts, and after tightening everything back up the issue appears (hopefully!) to have lessened to what I would expect from a non-humbucker system.

Looking forward to seeing how it helps my shoulder and neck.

Have fun and I hope with you that your shoulder and neck don’t experience any more/and less problems,
Greetings,Rogier

Happy NGD, I’ve got one of those as well and funnily enough mine was also a B stock!
It’s a great guitar with some pretty raunchy sounds cranked up, the only things that I’ve done to mine are to replace the nut with a graphtec one, tuners, and changed to a roller string tree and polished the V slots in the bridge. It’s as good now as you could buy for x4 the price if not better!

Happy NGD Andy. Nice looking guitar, I hope it brings you many hours of happiness.

To paraphrase the good book:
"Unless I feel the frets on the board and turn the tuners with my fingers, and put my hand on the curve of its side, I will not believe.”
Well, ok, a pic will do

Good choice, from what I hear; a lot of bang for your buck!
Did you get the sunburst or olympic white one?
It looks good with block inlays and bound necks.

I liked its clean tone a lot when heard it online.
online reviewers seem to be impressed by how much it overdelivers.

Yep, it’s actually jazzmaster, but I can’t tell them apart except the scale length!
Anyway,

This one needs some work.
The nut is pretty dire and the trees definitely need replacing. Tuners will be improved at some point as well.
Just waiting for some fret rubbers from Crimson Guitars to give everything a good polishing - the frets aren’t bad, just not super-smooth.
As you say, it would be tough to match this for it’s price, or anywhere near the price.

It certainly appears to be easier to play than the LP style I have, with reduced shoulder pain, and the fact that it weighs at least 1.5KG less also helps!

Mine’s the Sunburst one, they hadn’t got any white at the time, and here’s the string trees and tuners (both from Thomann). 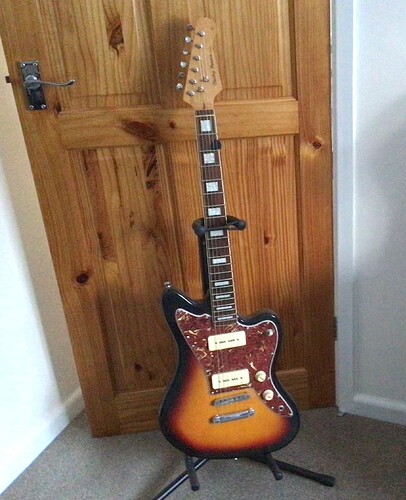 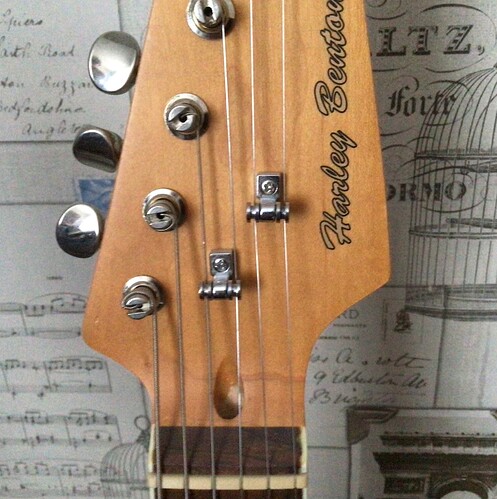 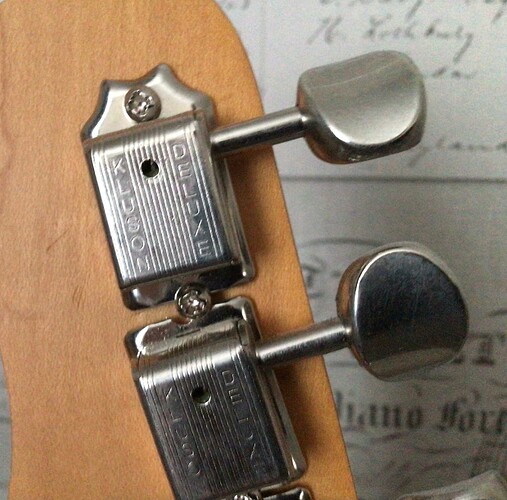 Those trees and the nut look a big improvement.

Yeah, the tuning stability is much better, especially when doing 3 fret bends!
The Kluson tuners are a lot more positive as well, the old ones had a bit of slop.

Just checked again, and though the scale length is indeed 25.5 inch, the style is listed as ‘Jaguar’

Maybe a subtle difference in body shape?
Certainly doesn’t have the bells and whistles of the Jazzmaster tone controls, which I think would have made me dizzy

. I had searched for a Jag as they were the first ones I saw with a hard-tail in an offset design.

I really didn’t want a trem system - I have enough issues playing the strings in tune, without something there to deliberately make them go out of tune (I am very adept at that

) The other reason for not wanting a trem is that at the price range I could look at, there was no way a trem was going to be stable enough.

I am (as noted above) going to change the nut and string trees, as these are not up to par, but at this price, sheesh, it’s a no-brainer. Only issue I did have was trying to source a left-handed Graphtec nut (found one now).

Now back to the learning and practicing.
Just found Justin’s Smoke On The Water tutorial.
Come on! I had to play that one eventually

Starting with the opening riff, so I can teach Mrs T. as well.

OK it is pretty enough, I guess, but the thing is, it has to sit next to my guitar

. Now Joe is quite particular about his friends and who gets close, (this new guy doesn’t even have a name yet

Hi Andy,
So, today is the day… congratulations

Hah, the very thought.
Sitting on the couch together sending messages online.

We’re sitting at the computers together doing so

…Well, to be fair, Kathy posted this whilst I was visiting my mum.
So not freaky at all…much