This is a Carson Robison Recording King Model K. It was made by Gibson at the Kalamazoo factory for the Montgomery Ward catalog back during the Great Depression. They built it with cheaper materials so that people could afford it. The serial number on this dates back to 1938. 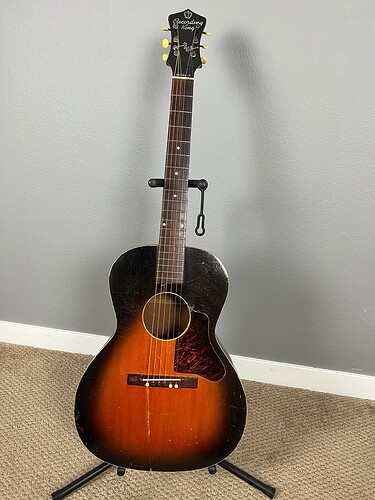 This is one of the ads for the guitar. 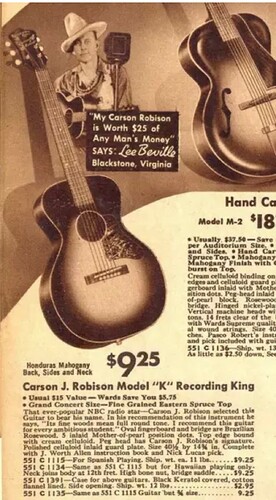 I picked this up for pretty cheap. But it’s in pretty bad shape. This model has no truss rod so I can’t adjust it. The action is high which not unusual for older guitars. The finish is in pretty good shape but there’s a crack and it was repaired with what appears to be a glue gun. The original tuners are hard to turn. it doesn’t stay in tune very long. The bridge pins don’t match. I think it came in the original chipboard case, which you can probably guess is in bad shape. I can probably go on and on with all the issues

I’m lucky enough to live in a big city that has quite a few vintage guitar shops. So I might call around to see what they can do. But if anyone has experience with stuff like this I’d love to hear! Wow, what a slice of vintage instrument history you have there Joe, fascinating and exciting. Keep us updated on what / how the luthiers treat it.

That is quite something, Joe. I suppose there are restorers out there, a matter of finding them and having access plus of course the cost/worth it equation. For what it’s worth, it had a great vintage sound when you riffed those open chords.

Maybe if the action remains high it could be setup to play country blues with a slide?

Hi Joe,
Such a beautiful oldie with a story … I sincerely hope that there is someone who can make her better … keep us informed … good luck with it … and of course have fun with refurbishing

Fun! I want the arch top in the add for $18! Damn. Guess that was a bit more money back then.

Looks really nice, will be interested to see how are you going to improve it, especially with no truss rod!

It looks and sounds OK, just needs a bit of tidying up; I would probably use it to play slide maybe Delta blues style a bit like this: It was originally built as a Hawaiian style guitar – basically a slide. Many people convert them. But I’m not sure what this one is at the moment.

Also this has ladder bracing, but I’ve read that people like to convert it to x bracing. Probably a costly project.

These were originally built as Hawaiian style guitars. So slide would definitely work. The guitar has to stay in tune for more than a minute though.

I’ve seen videos on YouTube and they sounded much different. So I’m hopeful it can be restored to some former glory.

How technical are you?

I would first tune it up and measure the action at the nut and 12th fret. At the nut, fret the strings at the second or 3rd fret and see how much the string clears the first fret. Should be very close to it but not quite touching. If the gap is more than a business card the nut slots are too high (even a business card is probably a little thick, but ok).

If the action is high at the 12th It could be the saddle, the nut, the neck or the belly.
Look at all of these. Is there a belly bulge, is the neck bowed or twisted?

Measure the neck bow by holding the 6th string down at the 1st and 12 th fret. Again a business card under the string at the 6th.

Since there is no truss rod, you need either the same, lighter or heavier strings, depending. Heavier would presumably increase bow, lighter would reduce it. Too light and it could bow back. It would help to know what is on it now and what should have been on it originally, if possible.

If it all looks ok and the action is just high, you may just need to lower the saddle and or nut. Not too hard and I can offer advise should it come to that.

There’s almost no material left on the nut or the saddle. Belly has a slight bulge. Not bad though. I think previous owners did some work on it, or at least tried to, because photos of this guitar in pristine condition at guitar shops show much more material on the nut and saddle.

Can’t tell much from your earlier pictures, but a lot of saddle in that ad.

I would look carefully at the neck bow. If the belly is up and there is a lot of bow, maybe just lighter strings?

On an old guitar, the neck may need a reset. The belly may just be bulged over time.

The strings also look funny above the nut in your pictures, but hard to make out.

Took it to the vintage guitar shop today. Needs a neck reset mostly. Estimate is around $800.

Up for a challenging home project? I have seen videos that would walk you through it. I guess if it was my guitar and I knew it was not worth the additional investment and there fore destined for the trash bin, I would give it a go, but I probably would only make it more suitable for the trash…

I would probably do the same, but this is such a rare guitar that I’d want to hire a professional. Might be worth restoring. I’ll sit on it for a few days.