Now I need to concentrate on guitar cable

Thanks to this wonderful forum. through your recommendation, I am equipped with an electric as well as acoustic guitar,
Multi-effect, even with a guitar wireless system but now I need guitar cables in different areas

In past, I got myself the following guitar cables

But one of them did not last long and I am not sure about the quality of the other.

What guitar cables do you use , What about short cables from your effect to looper or cables to your audio device etc?

That’s strange. I was under the impression that D’Addario gear was pretty good quality.

Personally, I bought a relatively cheap cable from one of those Asian brands so common on Amazon these days. I was on a very tight budget at the time, and didn’t expect it to last long. Three years on and it’s still working fine, despite all my bouncing about while playing. The sound quality is perfect too.

Never had any cables that “did not last long” and still use 2 of these I bought in '96.

What happened to it ?

There are so many good brands but they need to be cared for if you want them to last.
As to length you will need to calculate that, in respect of how you set up.

But one of them did not last long and I am not sure about the quality of the other.

Did you try resetting the breaker? I’ve got these ones:

I have a mixture of standard-priced cables including D’Addario, Fender, Planet Waves, Thomann own-brand.

I’ve never had any problems with any of them.

I even have one of those circuit-breaker types (I don’t really use it as I found it to be fairly pointless).

The only cables I have had issues with have been very cheap no-name cables. In this case I have had a couple fail.

As far as “quality” the only thing you really need to care about is ruggedness and how likely it is to fail under normal use.

There are some differences in tone between cables, and this might matter to you if you are playing on large stages with 10 metres of cable between you and the amp, but you shouldn’t worry about this in a home setting with 2-3 metre cables.

The differences are generally not due to “quality” as such, but more due to differences in construction which lead to different capacitances in the cables, which results in EQ changes due to filtering.

A lot of guitarists like these EQ changes, and so many wireless systems will actually emulate them.

You can pretty much also dial out the effects of the cable using EQ, if you really want to.

So, IMO, don’t worry about “quality” in terms of “tone”, and concentrate on the ruggedness aspect.

Any cable from a well-known brand or supplier that costs above around $5-10 US per metre or more should be good.

The exception to this, IMO, is Monster, who I personally wouldn’t touch with a bargepole.

Yes you are right , watching a few videos and online research confirms what you are saying.

I don’t know if it helps but I just changed all my cables as they were given and found with purchased items so wanted to get some stuff that I could rely on and Artist guitars had just the right stuff I really recommend them. 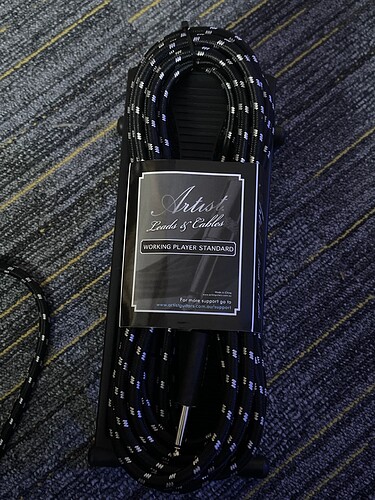