Nutshell by Alice in Chains

That was great in all aspects and a pleasure to watch and listen. Luka did a grand job on the bass, so a good call to reach out for colabs !!

Sounded awesome Adrian! Really captured the soul of the original there. Real Layne Stayley and Jerry Cantrell in one.

I think this kind of singing suits your voice well IMHO. At least sounds more natural for you than some of the higher pitched songs. Not sure if that is my affinity for AIC coming through though!

Glad that hearing some AIC inspired you to record this one - a top notch performance for sure.

Thought this was great adrian! I loved your solo play especially very nice!

Adi, that was very tasty. Loved the song. That was excellent playing and singing. You just go from strength to strength.

A big up to @glpguitar Luka as well for helping you out.

Toby, JK, Bytron and Stefan- many thanks for the listen and appreciation!

Finally getting back into action here after some busy busy days. Excellent production, Adrian, all the usual great qualities. A special shout-out on the control you displayed playing the electric guitar parts. Clearly there was plenty of gain and drive/fuzz in the tone and no hint of any unwanted notes/string noise contaminating things. Liked the fx on your vocals.

@glpguitar great job on the bass, Luka, made the whole production all the better.

Really great Adrian. Super rhythm strum, lead play and vocal. Great fx on the lead. Well done.
Don’t want to offend anyone but I could only hear Luka’s bass in the final bar or two. Have I missed something? I was listening on my phone so probably not the best speaker system!

Hi Gordon wow such a nice words, thank you! I would definitely recommend pluging your earbuds into the phone, it will all become a bit better then I think and Luka’s bass will be a lot more hearable, I personally think it sent this song to whole different level but I am biased

so I will just do @sairfingers

glad you enjoyed the recording and thank you!

Gordon, you are not missing anything, that’s the point of the bassist in the band! You just hang out and get an equal cheque for less work

To all fellow bassits - of course i am just kidding!

I was listening on my phone so probably not the best speaker system!

Gordon, if listening on a phone speaker it will certainly make a difference. I have a set of what I call mid-fi ear-buds with a mic that I use on my laptop. I say mid-fi as they are a big step up on the buds that come with a phone/tablet based on my own experience. And I still hear a difference when I listen on my PC using either my mixing headphones or my son’s gaming headset.

So if you don’t have a decent pair of headphones then maybe that would be a value-add acquisition to enjoy a better reproduction, irrespective of the platform. And wouldn’t be crossing the line in terms of gear/tech

To what extent the device … phone/tablet/laptop/PC via AI may influence sound quality I have no idea. That is a factor that somebody like @Majik would be far more able to comment on.

The below on an article about mixing may be of interest in the discussion to Gordon’s phone speakers: 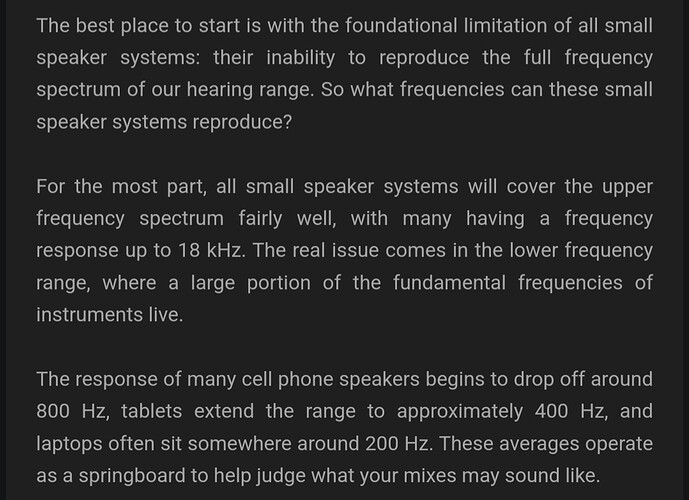 And to add to that, a kick drum sits below 100Hz and a bass guitar in the range 40-400Hz, so likely to missing the low end significantly listening on a phone speaker.

To what extent the device … phone/tablet/laptop/PC via AI may influence sound quality I have no idea. That is a factor that somebody like @Majik would be far more able to comment on.

Long answer:
A lot of people make a big deal about the benefits of expensive DACs and so on, but the truth is that modern electronics has largely voided a lot of the hifi vendor’s and snobby audiophile claims. What used to cost thousands of dollars 30 or 40 years ago is now available for a few 10s of dollars and is, in fact superior.

Up until the point it’s converted back to analogue so we can hear it, a digital file from a recording studio digital master and the same file on your phone or laptop are, for all intents, identical.

Obviously, there are cases where the file has been altered in some way, such as MP3 or AAC compression. These do degrade the audio quality in certain ways. How much depend on how aggressive the compression is: degradation can range from terrible to negligible. But that’s a function of some process that someone has put the file through. It’s NOT a function of the phone, laptop, or other device. For an identical file, the quality is identical.

Audio quality DAC (Digital to Analogue Convertors) are, in fact, very cheap: The difference in cost between what some people consider to be “high end” and ones which are not is usually a matter of a few dollars at most. The difference is specification between these is minimal, often zero. In fact one “high end” DAC brand preferred by audiophiles by reputation is actually on the cheap side.

What does matter is how the DAC output circuitry is implemented, and the speakers (including headphones) it’s feeding. There may be some compromises in some devices, but I don’t think they are generally that significant for earbud use.

Additionally Bluetooth streaming does degrade the sound because it, effectively, does on-the-fly compression, similar to MP3, to reduce the bandwidth. Older Bluetooth streaming is worse. You can now get lossless quality with AptX codecs, if you have a phone and headphones that support it.

Obviously, the biggest impact is the speakers and the cabinets the speakers are housed in (or the design of the headphone/earbud). For normal speakers, the position and acoustics of the room they are in also has a big impact.

It’s also worth bearing in mind some devices include EQ software which does digital processing on the signal, which will have an impact on the sound.

@Majik Thanks Keith. That was what I was thinking.

@adi_mrok Thanks for indulging the side-bar, Adrian. I hope the next reply will be back on topic and all about Nutshell

Been in love with this song since 1995 Adi, and is one of my all time favourite songs.
You make it sound just like Cantrell in the Unplugged version…
what an amazing performance. I have quite a few attempts on it. I find it real hard to play… very well done Adi!!

Super nice. I am not familiar with the song, but I really enjoyed listening to your cover.

The bass line adds a whole lot to it.

Congrats to you both.

Really liked both your playing and your singing.

Killer vocals on this one Adrian. Great performance mate.