So this is what I’ve been spending some of my spare time (and £££) on over the last couple of years.

This is the guitar responsible for my 1st failed attempt to learn how to play the guitar.
Built some time in the 70s or early 80s in Japan, it used to be an uncle of mine’s, neglected in a basement when i picked it up some time in 2005 I think.

I’m quite happy to have (almost) finished repairing it! I replaced all the old electronics with CTS pots amd DiMarzio pickups. I routed the input jack cavity where it is now as the original input jack was where the tone knob is.

The fretboard had a lot of divots from playing in the past and the frets were in really poor condition so I removed them, sanded the fretboard smooth, put in stainless steel frets, same specs as the originals (or very close to in fact), replaced the nut with a Tusq XL and put on new (locking) tuners.

A few things still meed doing (low E nut slot needs some filing, bridge ideally needs replacement…) perhaps an adjustment for the relief and the action and a neck shim… but is functional and it plays now!
Does it play well? We’ll see when I am a bit more experienced.

Did I mess up? Most certainly, in various steps of the process (especially when sanding the fretboard). Is the fretwork perfect? By no means but you can play comfortably and intonation is good.

I learnt a lot and I’m a lot more confident with repairing and setting up, so much so that I’d love to start one from scratch!

I still prefer my Ibanez for now but I’m going to give this one a shot!
Anyway, I’m quite excited and wanted to share this 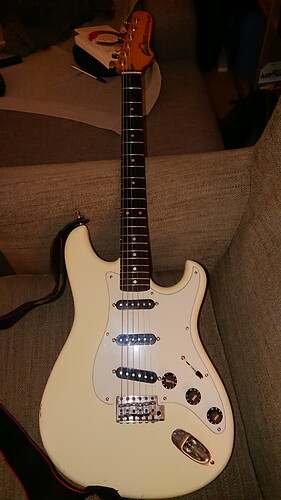 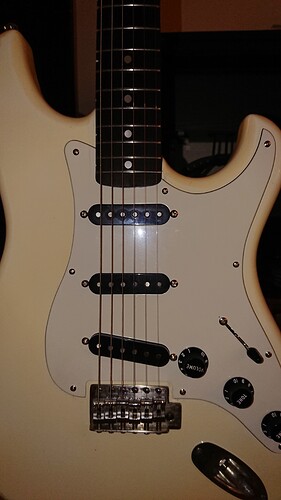 Looks like a great guitar, I hope it plays well. You’ve put so much work into that, you must basically be a luthier now.

Wow. Some bold moves there. Looks great, Would love to hear it

I’m still playing with pickup height, that’s a bit of a trial and error at the moment. But it’s definitely very bright compared to my other guitar and so far I think I’m liking the neck pickup better,it sounds warmer and more full.

I don’t know much about pick up brands/models. How did you choose yours? And you did the soldering?

The fretboard looks very dark. Is it stained?

The fretboard is not stained, I believe it’s rosewood and it’s definitely unfinished. At least I didn’t do anything after sanding it other than hydrating the wood with fretboard oil amd conditioner. It was kinda red-ish pre-sanding.

I had no idea what to pick for the middle position so I opted for another of the virtual vintage series, the 54 Pro.
All of them are noisless single coils.

I did the soldering myself indeed. I had practised on various broken things before and was quite confident, not 100% but it wasn’t going to do itself.

Nicely renovated, tbh I think that around that particular era the MIJ guitars were the best, they were very well made and were very consistent; also they had the MIA hardware, they were top notch!
Enjoy playing it, you won’t find a Strat that’s significantly better!

Thanks David and Darrell!
To be fair, I don’t know how good it used be. If it didn’t say made in Japan on the neck plate and wasn’t looking well used I wouldn’t have bothered.
I feel kinda bad now though as the original electronics were rusty, the pickups were falling apart and the 3 of the tuners were broken so I’m not sure how much of them I could salvage. I wanted to keep as much of the original wood though which I think I managed.
I’ll try to muster some confidence and strum some chords to hopefully share how it sounds.

What a great project Lefteris. It’s looks lovely. Looking forward to hearing it.

If you do start one from scratch, don’t forget to start a thread for it, so we can keep up with your progress.

Thanks Stefan!
I’m trying to get used to it first. The frets are lower compared to those on my Ibanez so it’s a very different feeling.
I’m also trying to come up with excuses before I build the confidence to share my playing! lol

I like your idea about starting a thread if and when I start a build. It’ll have to wait until next time I get to Greece though as “the woodworking workshop” is there, not in my London flat