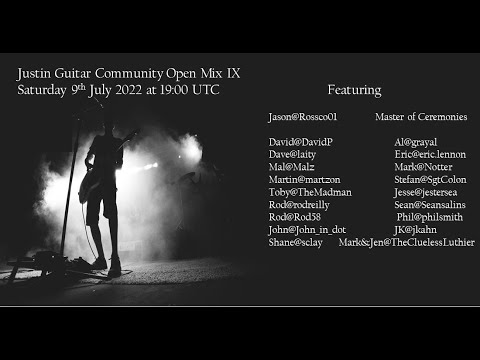 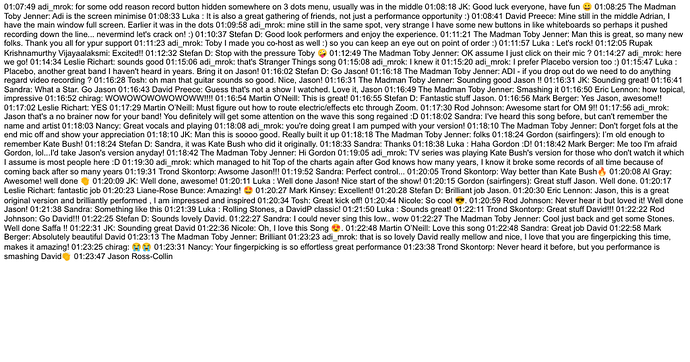 What a fantastic event. It may be a cliche to say it was the best yet, especially as in our case every event has exceeded expectations. But it sure was a wonderful couple of hours entertainment, many audience members commenting that it was a real show. I don’t keep track of numbers but I suspect that attendance grew again, both performers and audience. So much so that each performer played just one song.

All the performers stepped up and delivered with heart and soul. A wonderful mix of songs, and variety styles. We had regulars who’ve player the majority of the events, those who joined in post the merging of the website users and the old Forum to establish this Community platform, and debutants. Every single person can feel pride and satisfaction in their contribution.

And what is now becoming a tradition a small group hung out afterwards, so the ‘after party’ is now in situ rather than in this Topic, hence this topic only being posted the morning after.

I will come back and edit once Adrian has posted up the recording in YouTube. It takes some time to render once all the artists have signed off on releasing their performance to the world at large.

THANKS to Toby and Jason, the Coordinator and Host respectively for OM 009.

It takes the willingness of a few to ensure the event takes place, continues to be ‘An Open Mic for the JG Community run by the JG Community’, and I believe one of the Crown Jewels in the JGverse. The door is always open for others becoming regular attendees to put their hand up to play a role in the running of an OM. Like everything else, we all had to do it for the first time and were supported as we did so.

During the event, as the last echoes of Shane’s performance faded away, many were already asking about OM 010. The CFI (Call For Interest) will be published early next week.

We have now posted a “How it works, access, and eligibility” Topic. The OM Organising Team felt this was a necessary step as the awareness of this event grows through posts made by the JG Team in various channels and interest grew. We will continue to maintain the original intent and ethos, and ensure it remains in service of the Community Members to contribute to our learning to play, to be the musicians we dream to be.

Sorry, already posted on the other thread…

Thanks again to the organisers, performers and audience.

I cannot state enough what an opportunity this is

From focused learning, to nerves on the night, it just transcends the whole learning in your bedroom thing into something real.

Learning so much from the other performers too, what parts to practice and which bits are nice to have but not essential for a good performance. It’s all good.

As always and has already been said in the run up by many on here, happy to sit on the sidelines if it means more first timers (or the more regular posters) get to have their go……

I did see an ad for the event from Justin pop up on Instagram last week so may well be more interest.

Great stuff everyone, so glad I bowed out, the broadband in remote West Australia (Gascoyne Junction) has been either barely there or not at all.

Massive thanks to Toby, Jason, Dave and Adi for organising, hosting and running yet another great event!

Well done to all the performers - all amazing!

Thanks to the audience for all the support and positive comments and encouragement!

Looking forward to the next one already!

What a truly wonderful summation of last nights events, such that I cannot add anything in addition. It was truly great night !

I think we continually learn from the last show and that the package gets better and better. It is certainly the Crown Jewel in the JGverse but I suspect also unique, in so much as I doubt any other guitar forum is doing anything like this. We have come a long way since the trial of OM 1 and successfully migrated to the much more active new Community and are now attracting greater visibility beyond the Community. Hence the need, as you mention, to tighten protocols and ensure future OMs continue to serve the Community. Thus maintaining the original ethos and essence, when Jason first floated the idea.

I would suggest, that given this thread will attract a fair amount of attention once the video is published, a link to the How It Works - Access and Eligibility guide is included in the header, so folks can get acquainted with the new process.

Thank you again to everyone, Performers, Audience Members and Community Members, who have provide support and participated in this latest event. Without you it would not happen.

Thanks to everyone, especially @TheMadman_tobyjenner for organising and @Rossco01 for the stellar MC job.

Thanks especially to all the performers and audience. Really good to have an audience to perform to. And the wide range of skills on show - from long term pros through to newer learners. Such a welcoming group.

It was my second OM and thankfully the nerves were not as high this time. No sweaty palms, but a bit of wooden fingers at the start. Sage advice from @DavidP as usual, about it getting easier over time.

Thanks for a terrific evening and for the opportunity to make my global live debut!

Funnily enough, and as always, the mistakes I remember in my song don’t show nearly as badly as I feared they would in watching the preview recording back earlier on. And I can say to anyone considering taking part, don’t be fearful, you’ll have amazing support from everyone and the experience will undoubtedly be a benefit to you as a musician. I’m still buzzing from it all.

To my fellow performers, to a person everyone can take massive pride, I loved all of your performances, we’ve got some incredible talent in this amazing community.

Hello everybody,and then in particular Adrian, Jason, David you deserve a flower for what kind of energy you put into this…and in that thought Toby deserves a flower garden for this evening…what a lot of work.

I was very quiet last night due to disturbances in the wifi connection,…but I have now learned how to turn my wife’s phone into a ‘mobile hotspot’…that my camera quickly went black was probably something to do with an eviction by the host? or was it just me? (my looks then huh

)
I continue to find it special to watch and listen with so many men and women all over the world at the same time . To people I “talk” to and see playing behind the computer on a daily basis…I enjoyed it and thank you from the bottom of my heart

Congratulations to all the performers. My first time in the audience and it was a great show!

My first time in the audience and it was a great show!

Apologies I needed to bow out earlier yesterday, regardless I managed to catch up while cooking up final video and boy oh boy what a great show that was! Thank you to all debutants: Mal, Mark, Martin, Jesse, Rod R - you all did fantastic job and I hope you got infected with performing bug and will join onto another one!

Well done to all the remaining players and also to all people attending the show - wouldn’t exist without all of those involved! Already waiting for another one!

Congratulations for the performers and the organizers of the show yesterday. The after-show chat was also pretty interesting, it was nice to catch up with most of you “face to face” as well.

Another great night and great experience, good hanging around for the chat afterwards. Inspirational to be among players at all points in the journey, seeing what has been, can be and is being achieved. Bravo to all.

Echoing the sentiments already expressed so well by others - THANK YOU Toby, Jason, Adrian, all the performers and everyone in the audience. This was a very special event to be involved in - gave me so much focus in my daily guitar practice for the last month and an unbeatable experience to be able to listen to so many great artists and to perform (my hands were literally tingling for 10 mins afterwards). I learned a ton preparing and performing, and also learned a lot from each of the other performers. Looking forward to continuing to participate in the community and in future events!

Would have been an early start for you Tony😳. If I’m correct it’s a 3am start in the WA time zone?!

I’m not 100% sure. If I had good broadband I’d be happy to get up early for some open mic fun. although later is definitely preferable

Hope you’ll be cashing in

I certainly hope to, David. Looking forward to that!

See I didn’t even catch that the first time. Guess I’m a bit slow today! lol