So here’s my backstory…

I started playing as a teen, never got better than a substandard level of mediocrity, and 50 years later as a grown adult would have thought that the notion of ever playing guitar at any level again dead. Then one day I crossed paths with a sorry looking old stray dog in the form of a black Dean starter strat sitting on the shelf of a Goodwill store. Well, looking up at me with those puppy-dog eyes sparked something inside. Twenty bucks + tx , out-the-door, gig bag included. Sold.
Man, that turned out to be one sweet little guitar after it was nurtured back to health.

That was June, 2019, and I remember it well because it was within a day or two of my 67th birthday.
Between then and the date of this writing (roughly 3 1/2 years), perhaps 2-3 dozen or so different guitars and amps have passed through my hands. Some are of notable mention, like a Fender Princeton and a '95 Fender MIJ TB FotoFlame Strat - and still I remember that Dean. Ahh, first love…

I’ve been a member here for a couple of years, I think. Honestly, I don’t know where I’d be without this site - it is one of the most remarkable resources I’ve ever come across. I’ve completed a number of courses, but I’m currently studying Theory, Folk-Finger style, a number of songs, including Justin’s sublime arrangement of ‘Desperado’. I suppose there are some things you never stop learning - I’m counting on that part. I’d like to engage more socially here because there are some truly terrific folks that share my love of music and guitars. I’m retired and play from morning till night whenever I can, and the wife has been told to bury me with my favorite guitar cradled in my arms.

My musical tastes are wide - it’s probably easier to say what I don’t like. My playing choices are the same. I started with electric; mostly Blues lead solos, but having just got a 25th anniversary Taylor, I’m now more appreciative of acoustic.

I do smattering of home recording and use a Scarlette 2i2 and AbletonLive Lite11, although I’m not very good at it yet - but I’m learning.

I currently own 10 Guitars Here’s one of them I particularly like. It’s a 1967-68 Kent; a Japanese made guitar believed to be manufactured by Kawai, best known for their pianos. Pretty sexy looking, isn’t it? And plays and sounds as good as it looks. In the back is a Tayor 510 AB 25th, and on the right is a Classic Vibes Squier Tele. I seem to play these mostly. The amp in the back is a Crate Vintage Club 50. I really came to prefer the sound of tubes/valves’ over SS and seldom power up my VOX VT40, even though it’s a T/V hybrid and a respectable amp for its class. I also have a Firefly E338 Sunburst, and an Ovation CC57 that get their fair share of attention, too. 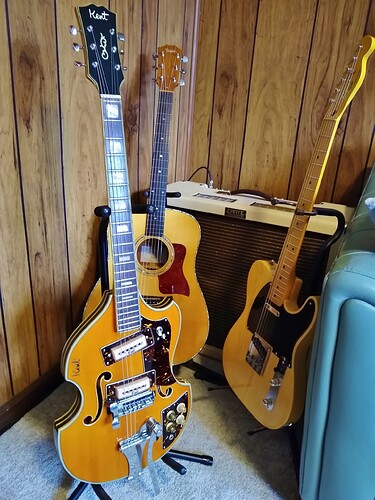 I recently picked up this amazing little gem that’s going to keep me busy for a while! 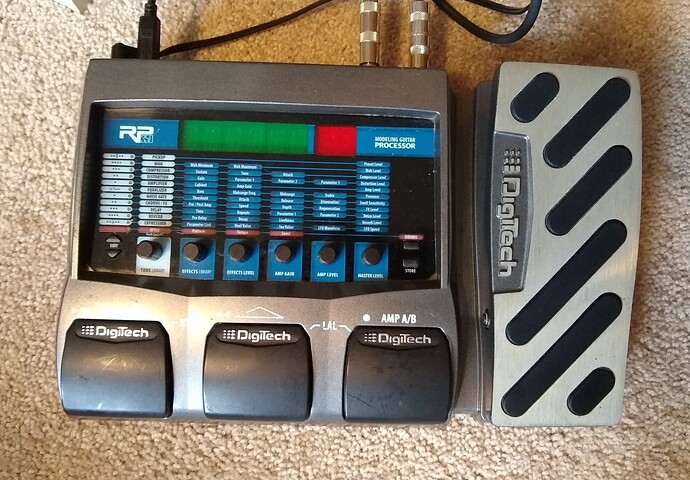 Well I think I have a handle on posting to this page - it is pretty straight forward. So many learning curves to navigate these days…

So, I thought that I should post this photo of some of my other gear to keep things current. I told myself to sell some, but I can’t seem to part with any. I suspect there’s something wrong with me… 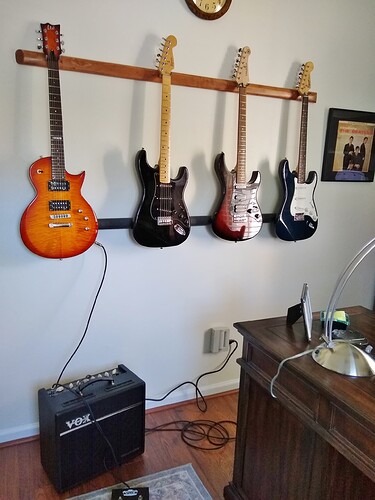 Hey Gary, great to read your story, the images looked just fine. I started playing at the age of 53 after dreaming about it for many years. I often wonder what would I be playing if I’d started much earlier as my music tastes have changed lot over the years. If I’d started as a teen I’m sure it would have been an electric guitar yet now my tastes are very much acoustic. Great to hear from you and look forward to hearing more.

Hi Gary thanks for quite an insight to your story, always interesting to get to know fellow guitarist!

interesting the DigiTech multi fx is first fx I got to know when I started first as a teenager. I couldn’t afford one like this and I remember in my dorn there was a guy with one and he let me play it a bunch of times - I think the unit was a reason why I gave up partially due to thinking that without it I am unable to learn stuff I wanted to. Partially I was correct but amount of stuff I haven’t learnt before I started with Justin is mind boggling - and that’s probably where our stories join together

Hi Gary,
How nice to get an insight like this, I find it interesting to read what better guitar players have chosen and choose for a path,… thanks for that…
You have beautiful guitars, and I see a pattern in your color preference

(or is this really a coincidence)…
Such a LL is applicable for anything and everything, … you could also post pictures of …, for example,… well let me come up with something like that

… the art you make

, … .i am very impressed and it is stuck in my head now from what i saw of you an hour or 2 ago…
Thanks for sharing,
Greetings,Rogier

Gary, thanks for posting a learning log. There seems to be a number of us more advanced youth on this forum that have returned to the passion for guitar.
I am amazed at the talent level of some of our older members. It definitely provides a path of aspiration!

Thanks for the responses - A lot of like-minded folks here; feels like home! Never to late to start. I figured at 70, if I have 20 years left, I’m going to re-live ages 17-37. Seems to be working out ok so far…

@Papa_G Hello! Glad to hear you are already enjoying the site.

. Oh dear another sufferer of GAS! You can never have too many.

Had to take out some time from the family visit to read this Gary and well worth it.

Lovely intro and story on your progress to date and a sneak preview of the collections.
Kind words about the Community, which I wholeheartedly echoes, as there have been times in the restart journey when I was ready to jack it in again. The old Forum kept me going, as does the new one. I don’t visit any others and those I encounter have been by accident when seeking tech type answers but I doubt any out there are as supportive and friendly as this one. So you are in the right place, so never be afraid to stick your hand up and say Help !

As for pictures, if you have them on your PC/Laptop you can just drag and drop direct into this text box and the Discourse software will automatically embed. Simples.

Thank you for sharing, always good to me new, oldies.

Hi Gary, thank you for sharing your story. For me also a multi-effect pedal is all the fun and sound variety I need for now.

Thanks for saying hi

Thanks, Toby - yes I was able to get some up. Very straightforward and user friendly - whew!

There is a point it seems, where I get bored with playing the same old and need to shake things up. I’ve heard that hitting this ‘wall’ is not an uncommon thing and a lot of players deal with it. Justin, covers this excellently in his post (How To Rekindle The Love For Guitar? | JustinGuitar.com). Some switch between acoustic and electric, explore a new genre or try to learn a new technique, just to get over the bump and keep the mojo humming - all good stuff. Lately, I got the notion to try to partner up with another player of comparable skill level, so I posted an ‘ad’ (ink on paper & thumbtack) on the bulletin board of my local guitar shop thinking it may be the next natural step in my trek - we’ll see. Anyway, I’m always looking to add new ideas to my toolbox, and interested in hearing if others have any tips, suggestions and/or stories.

Anyone else have this ‘problem’?
I collected these over the 3 years since I started playing. There are a couple of ‘pound dogs’ in here that I rescued - they seem to be my weak spot. It seems that when I see a neglected ax I just want to take it home and nurse it back - sigh. 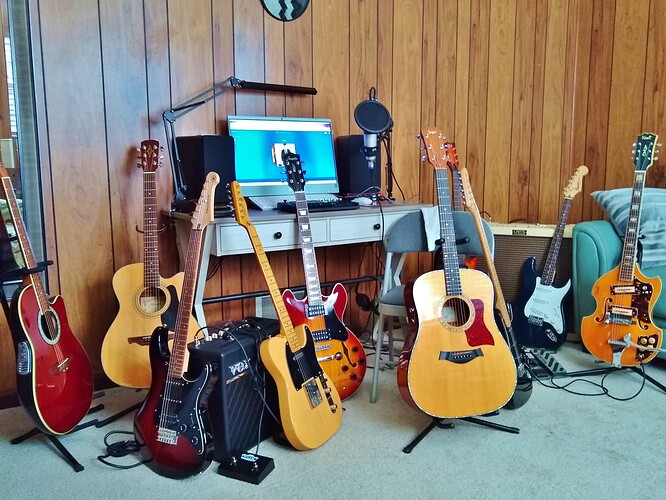 Hi Gary,
It looks like you have a problem

…an addiction?,…a nice collection in such a short time, yes that of course…,… or a person with a little too much compassion with a guitar?

…You should talk about it I wanted to tap, but luckily you already do

,… we have that with plants in a nursery, the worse they look the sooner they go…and when we have the land for it in a few years, that will happen with animals

…
I would say,…have fun with it because healing is no longer possible

What problem ? I see no problem ?

You could stack em and rack em to save floor space, so giving the perception of there being less.

Yes, encourage him Toby … one addict tips the other to disguise things