Parisienne Walkways #1 (A work in progress)

Not there yet, just missing the bends, the vibrato, the legato - okay everything! But it’s a (one-take) starting point. No idea how long it will take me but apart from it being a gorgeous song to be able to play it will also teach me a lot for techniques. You’re on the way with it Mari, I think that you need to have a look at your Amp setup and maybe try a different pickup setup. Your playing isn’t bad at all but I would make sure that you identify the bad bits and fix them, you really don’t want to practice them bad! I can elaborate further if you want me to, but first really listen a lot to the studio or record version, not off the album or live shows. Listen to the bits you’re learning until you know the note for note, it will make the difference, it’s not just about getting the notes right it’s also the feeling.

it’s not just about getting the notes right it’s also the feeling.

Thanks for your comments, Darrell. It’s hard to pick little bits out when most of it needs work! However that is a good point, so I will practice it phrase by phrase at least anyway. I especially like your one comment about getting the feeling. I wanted a sense of the overall layout of the song but as I continue to practice I want to learn it with feeling, not just practice the notes and try to add feeling later.

Cool post! Based on the other stuff you’ve done you’re gonna get there.
And sounds like that guitar won’t let you down. Fender? Practice in time too - that’s what I need to do.

Thanks @NickDelRey . Yes it’s an American Pro Strat HSS, and I don’t play it nearly enough! I usually do practice with a metronome, or drum track, so I will get onto that with this tune.

I like Darrell’s suggestion Mari, start with a tone and once you set it you won’t have to think about it again. Then you can focus on getting song under your fingers

Like the idea of a progress post, I always plan to do it and realize I already started learning the song so it’s unfair to say this is my starting point

I don’t ever recall seeing you with an electric, super nice and super excited to see how are you getting on!

Thanks @adi_mrok . Just to be clear, I’m not sight reading this piece! I’ve probably practiced it 2-3 hours so far, this is just the first time I can make it through without completely massacring it.

I got this Strat 2 years ago, I love it, it feels so comfortable, and yet I hardly ever play it. Electric guitars kind of intimidate me if that’s the right way to put it, so much more to learn about amps too. Anyway I plan to be playing my Strat a lot more in 2022.

No murder and no river !! You are doing well, there is a lot to learn, especially once its all lumped together, mine seemed to take for ever and I cheated on most of the bends

. You are getting the structure down and know what needs improving. As Darrell said listen to Gary’s studio versions they will be more consistent. Try and get the tone right, as it will help you more while dialling your fingers in. Just take your own sweet time.

Thanks @TheMadman_tobyjenner . I was playing a massacre yesterday, today was worlds ahead of that. Listening to you guys now I’m going to spend some time on tone. I found a tone I love for another song by accident, be nice if that would happen for this one! For the other one though I found the tone on my Vibro Champ XD while fussing around for this song, so I need to see how I can replicate that on my Katana so I can use a pedal to switch between channels in that song. It was nice to find that one tone though, it’s proof that they’re sitting there waiting for me!

@adi_mrok my Strat looks solid black in that video, but it’s actually Tobacco Sunburst. I got the guys to change out the white pickguard for a black one before I picked it up, so this is what she really looks like 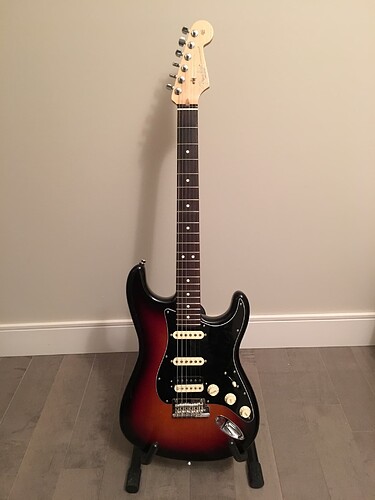 Thank you @Esme63 .I’ve got a long way to go on this one but it’s going to be a fun journey

Mari , after a couple of months playing with the wrong hand and finally buying a left handed guitar …I can only dream of the day that I can play anything ! Es

@adi_mrok I wondered why black wasn’t standard instead of custom for the pick guard on that guitar!

Seems like your are gearing up to enter the “Most self deprecatory Community poster” award, Mari

If you just posted that without telling us what you were playing there’d be no doubt that anybody who knows that iconic song and solo would recognise it. Sure fluency, feel, accuracy a work in progress but, for me (yes, yes, comparisons are the ultimate NO NO) that as a result of 2-3 hours practice is mind-boggling.

The guitar playing dude I have hung out with a couple of times, told me he that people are boggled when asking about time to learn such solos. He spends 10s of hours on individual licks over days.

So I’d say you are making good progress.

Did you consider using your Gretsch for this song? I know the strat is HSS but not sure of the pickups that Moore is using throughout the solo. I’m no expert but perhaps some of what contributes to the tone throughout may be a switch from nick to bridge pup. And if that is the case, then the Gretsch may be more suitable than the Strat (which looks gorgeous).

Again from somebody who is a absolute novice on lead play and the techniques involved, you may find using a different amp voice with a little more gain may help with sustain that will help with getting the vibrato closer to what you want to hear (as well as improving your vibrato technique as you go).

Anyhow, keeping rock this classic, now I am going to have a second watch!

Can’t beat a Strat in TSB but I must say the slightly darker sun tone and the black pickguard, gives it real presence. Seems to have a little more cred than my Deluxe Roadhouse and its subdued white pearl plate.

Re PW tone, David has a point with PUP selection but you do have 5 positions to play with and there are gaps in some of the song sections to switch. Worth experimenting. I think I most likely did my “cover” on the neck pup, as back then a clueless noob ! Hey what’s changed.

@Kasper covered this and I am sure could advised on Strat pup usage and tone but I can’t recall what he played it on, I just remember how darned good it was.

covered this and I am sure could advised on Strat pup usage and tone but I can’t recall what he played it on, I just remember how darned good it was.

And @MikeSebastianP could also provide guidance. Don’t know if he ever shared a recording of PW but this has some similarities.

Great stuff Mari. Well you’re certainly en route to becoming the Guitar Goddess you talked about on the old forum! I’m most impressed by what you’ve achieved with PW.

You’ve inspired me to try learning the solo part from something, (don’t know what yet). Funnily enough it’s not something I’ve ever tried to do. I’ve worked on 2,3,4 note licks and improvs but never an actual solo piece.