Parisienne Walkways #3 (A work in progress)

Don’t be too critical of yourself. This sounds like a big challenge to play and you are doing great. Keep it up.

Not 100% perfect, but an 100% great effort at playing something by the immortal Gary Moore.

As for tone - find your own. If you can’t nail Gary’s, work on fattening up your natural tone - make the song your own.

@SDKissFan @Digger72 thanks for your encouragement. I have a long way to go with this song, but I am also much further along then before I started!!

Tone, yes Stephen that was mentioned by Richard as well, find my own tone. That’s going to take me awhile too, but that’s kind of what I’m interested in anyway. I’d like to have a handful of tones I really like that I can use for different songs, rather than trying to get the tone ‘perfect’ on any particular song as compared to the original artist. I know lots of people will want to find the original tone for every song, but I don’t see myself spending my limited practice time there. Your comments reminded me of that!

work on fattening up your natural tone

That caught my eye as I would often like my tone to sound fatter, but haven’t yet found the equivalent of a few beers on a regular basis that would fatten me up. So any tips and tricks to explore?

That was very nicely done Mari. I liked it. I would have been able to tell what is was without you putting a title on it, so to me, that’s a win.

I look forward to hearing the finished version.

Try dropping your tone down on your guitar and adding more mid on your amp, you will have to resort to a lot of trial and error but that’s my hint!
Gary didn’t use a lot of pre amp drive, his main tones came out of driving the power amp, it’s very difficult to get that at home volume levels but you should be able to get a reasonable sound.

A friend of mine who is big on guitar tone will hopefully be coming over at some point to help me with my amp, and tone

Off the top of my head, on the Katana (using BTS) I would look at using a GUVNR boost to give you a marshally sound, and look at the Guitar Sim effect in SC->HB setting to make your strat sound more like a humbucker equipped guitar.

You may also benefit from either a little compression to give you additional sustain (although be careful as this could also kill dynamics if too heavily used) or use the Sustainer effect.

It also depends a bit which version of the song you are going for. The studio version has more dynamics and is, in many ways, a lot more subtle. When performing live, he tended to be a lot more aggressive.

I’m late to this party Mari. That sounded really good to me. A work in progress of course but you’re doing really well and it’ll get better every time. Well done.

A lot would depend on whether I was messing with sound through the amp or recording DI into my DAW.
To be honest, these days (when I do play a bit) I do most of my processing in the DAW, so would thicken the tone by maybe Eq-ing out some of the highs/brightness - or as Darrell mentions, roll of the tone a little on the guitar.
I’d perhaps throw on a really fast delay.
Add some compression.

Again, it would depend on what sort of fat sound you wanted as well. So could use chorus. Or if you’re looking for something more aggressive sounding maybe some type of distortion/fuzz, but again rolling off some of those highs.
If I was going for a clean tone, then neck pick up, a good whack of mids on the amp - and process it in the DAW with some compression.

Tricky, but fun messing around finding a tone you like.

@Digger72
Thanks for tips, Digger

If I was going for a clean tone, then neck pick up, a good whack of mids on the amp - and process it in the DAW with some compression.

What is ‘interesting’ is that my amp has no specific mids tone control, bass and treble, with Blackstar’s ISF control.

The ISF works by shifting the whole tonestack response so that each of the controls react differently. You can break the ISF down into two main positions. Fully counterclockwise is the “American” setting and fully clockwise is the “British” setting.

The American setting is tighter, more focused, and percussive and the British setting is woodier, warmer and has a softer crunchy breakup. You can also set the ISF to anywhere between these 2 extremes to create new combinations.

Based on that, I have ISF fully clockwise, which sounds best to my ear (consistent with my liking of Gary Moore’s sound and others like Peter Green, I guess).

I suppose ultimately, if I got serious about electric guitar tone when playing through my amp, an EQ pedal would be useful, plus some of the others mentioned by yourself and others. For original song recording I also do the tone-shaping in the DAW after recording direct through the AI.

@Mari63
Mari, apologies for a minor hijack. In recompense, if you’ve never watched this performance, take a look. As guitar players, would have been better if the entire video was just focused on his hands, but there’s more than enough to wow one. 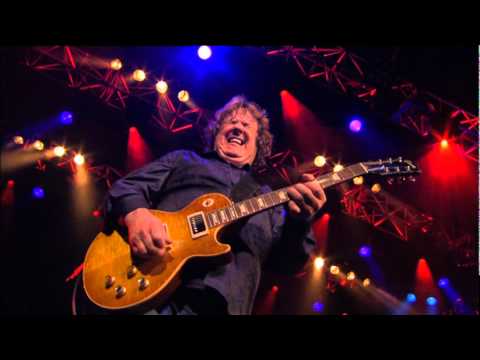 I like it very much. Will jam to it. Thanks.

@Mari63 enjoyed that a lot. I went back and checked out your previous versions and you have made big improvements.

@DavidP thanks for posting the video of the man himself.

Way too late here to add to all that has been said already, in respect of bends and tone.
BUT you are definitely making good progress Mari and continue to move in the right direction. I watch this develop with interest, as its been 7 years since I put out Murder By The Seine and hoping the statute of limitations has run out since the crime was committed.
If and when I return to this one, I’ll bare all the feedback here in mind, so it can be applied to my cringe worthy efforts. Looking forward to the next instalment !

Mari, lots already said on the tone (it sounds just a little too “clean” for my ears) but in terms of the playing that is wonderful progress. Really enjoyed listening to that and will continue to follow your progress on it.

Hi Mari, It sounds nice to me. Keep working on it and keep us posted. I watched some videos of the song before posting this to reduce my ignorance about the song and the artist. Pyrotechnics of a guitar virtuoso aside, the melody is what matters. I see you are having fun pushing yourself to get the closest possible to the original sound, and improving your playing by doing that.

@SgtColon @Majik @sairfingers @skinnyt @TheMadman_tobyjenner @Rossco01 @dobleA thank you everybody, comments and input are greatly appreciated. I’ve had a crazy busy work at week and haven’t picked up my guitar once. Sometimes a step away brings improvement - we’ll see!

Keith, I was also trying the GUV DS boost option on my katana, didn’t use that in this recording though. I will keep experimenting. I hear sounds that I like but I’m not yet able to reproduce them.

@DavidP no worries on a hijack. I’ve heard a few live variations, wow can he ever play!

No critique from me, just loud applause for the continued progress on this, Mari. I can hear the amount of time you’ve put into it, and I’m looking forward to the next update.
I’m sure you are learning a lot with this one.

@oldhead49 thanks Dave. Even though I’ve got a long way to go I am definitely learning a lot!

How long have you been playing? I think this sounds really promising. you clearly have a good sense of phrasing and timing which is really key.

The only thing I’d be critical of is sometimes your bends are a tad out of tune. So I’m sure Justin has lessons on this I think I used to practice them with a tuner or just unison bending and making the pitches match.

I probably wouldn’t get hung up on getting a tone too much I think your tone here sounds fine. Obviously it will be motivating to you though if you manage to dial in a sound you personally like more.