Parisienne Walkways #3 (A work in progress)

Audio-Video of You Playing - JustinGuitar Community

Any input or comments anyone has would definitely be appreciated. I’ve got lots to work on with this one. It’s a great dreamer song for me, so I’ll be working on learning it for awhile. I’m glad I decided to record it today, because it’s much more obvious to me how much work is still needed when I listen to the playback rather than when I’m just playing through. (i.e. I thought I was doing better than I am!!!)

Big big thanks to @Richard_close2u for posting up his backing tray to play over – thank you Richard! (I probably have the BT too low.)

Timing isn’t perfect. And there’s a big mistake just before 2 minutes, in Verse 2 (the easiest part).

I ended before the ending, since I’m still working on that. And I’m not even attempting the super fast couple of bars.

Tone? I watched a Studio Rats YouTube video on a Gary Moore tone, and set that up in my Katana 50. (Thank you to several JG Community friends for helping me figure out Tone Studio on my Katana!) I loved the tone when the Studio Rat guys were playing it. Apart from guitar though (Les Paul vs my HSS Strat), clearly a lot of tone is in the fingers. It was a really good video to show that. At the end when they have the tone the one guy plays it through and it sounds awesome, the 2nd guy then plays it – saying that tone is in the fingers – and it still sounds really good but not the same. I’m several steps below them (okay flights of stairs) so when working on the tone I have a ways to go as a player still yet to get the tone I want, not even counting dialling in a good tone. (They’re playing Still Got The Blues, not PW, but the tone I think works for PW too.)

Keith had suggested using GUV DS as the boost option on my Katana, to get closer to the Marshall sound. This Studio Rats tone uses a Compressor under Mod, so I can’t also use a Booster. I took the Comp off and added the GUV DS boost, but then I’d already been playing too long and my arm is killing me, so I did not get anything recorded through on that.

I’ve got lots to work on still, good thing it’s a great song. However – I generally practice with headphones on – carefully now since I just about blew out an eardrum! – but to record I recorded using a compressor mic so the amp was obviously on. Krista was in the next room and when I was done she said she was just about to come in here and murder me lol.

Any input or comments anyone has would definitely be appreciated.

Sorry, I don’t have it right now…

I thought it was all very nice.

…and I can’t help you further,I’m really looking forward to when you’re done with this…normally I don’t make it so late at the computer, but for now just a little confession. …I had tickets for Gary Moore when he would come play in my birth and then hometown…amersfoort,hoogland…and then he died just before, annoying for us, but a lot for him worse…I always have to think about him when it comes to him,…I used to be a bit of a fan

…
Good luck and have fun and a kiss on your arm,
Greetings

Lol thanks Rogier. Definitely a lot worse for him!

One listen, lots of thoughts, no time to write them just now.
From part 1 to Part 3 much has improved … even if Krista is at the murderous point!

Super difficult Mari but clearly you are getting there on your own terms. Will be seriously interested once you get all those bends nailed down. Gary’s tone is really difficult to copy so I would say this probably still requires a bit more work, however I understand gear constraints very well!

‘A bit more work’ lol that’s pretty generous Adrian. I was thinking this would be my 2022 project but I told a friend earlier today I’d send her the final version in 2025

I’m very happy to have finally figured out Tone Studio though (and thank you for your input), I think I will figure out a tone that will work eventually.

And you are making great progress, Mari. An enjoyable listen and inspired me to go take in one of his live performances on YT (picked Montreux 2010).

Tone is the holy grail. My 2cs worth FWIW perhaps explore rolling tone off a little on the guitar? Still sounds a little bright and stratty to my ears (but I am drawn to the HB sounds of people like Gary Moore and Peter Green)

I notice live he starts with neck HB and also makes use of the guitar volume to clean up the sound. I suspect live there’s a lot of drive going in and driving the Marshal’s hard etc.

And maybe for extra bonus points, that sustained note at 2’16" … can you let it sustain for a few more seconds? Note all the way to a characteristic Gary Moore length with all the vibrato, feedback, and Gary face but just a wee bit longer.

All that aside, tip my hat to the undertaking. You are surely learning and growing through the process, and as I said, sounding good!

Thanks David. I am learning that Tone is indeed the holy grail. I will experiment more with tone and volume. I also decided I will watch some videos on tone, starting with rewatching Justin’s lesson Great Guitar Tone Starts Here! | JustinGuitar.com

Hey Mari! That was really well done! Love all the bends and slides going on. Maybe a few bumps but you will get it!!! Loved it! Cheers!!!

I can also hear that you pay attention to timing and must be friends with metronome.

It will be exciting to hear new versions and see how you improve various aspects.

I feel that if you manage to get better tone, it will have huge impact on the recording because your playing is already very nice.

Did you record the acoustic backing track too?

I’m not usre what trickery was used in the studio version for the killer tone and sustain.
Live, Gary used a Les Paul on the neck pickup, the onstage volume was very high, using Marshall amps plus a Guv’nor pedal, Tube Screamer or Boss distortion. And, the stories have it that he would mark out the ‘sweet spot’ on stage where the feedback / sustain was at its ultimate and step there when playing those lead sections.

He would make outrageous use of his is vibrato, from virtually nothing when first bending to a little bit, to a bit more to very aggressive, as the note(s) began to fade. He had the knack of keeping them alive and ringing out-out-out.
Mere mortals may never come close.
Using a humbucker in the bridge of a Stratocaster won’t match the neck of a Les Paul unless you shape the tone substantially. Even then …
What may be better is to go for your own tone. 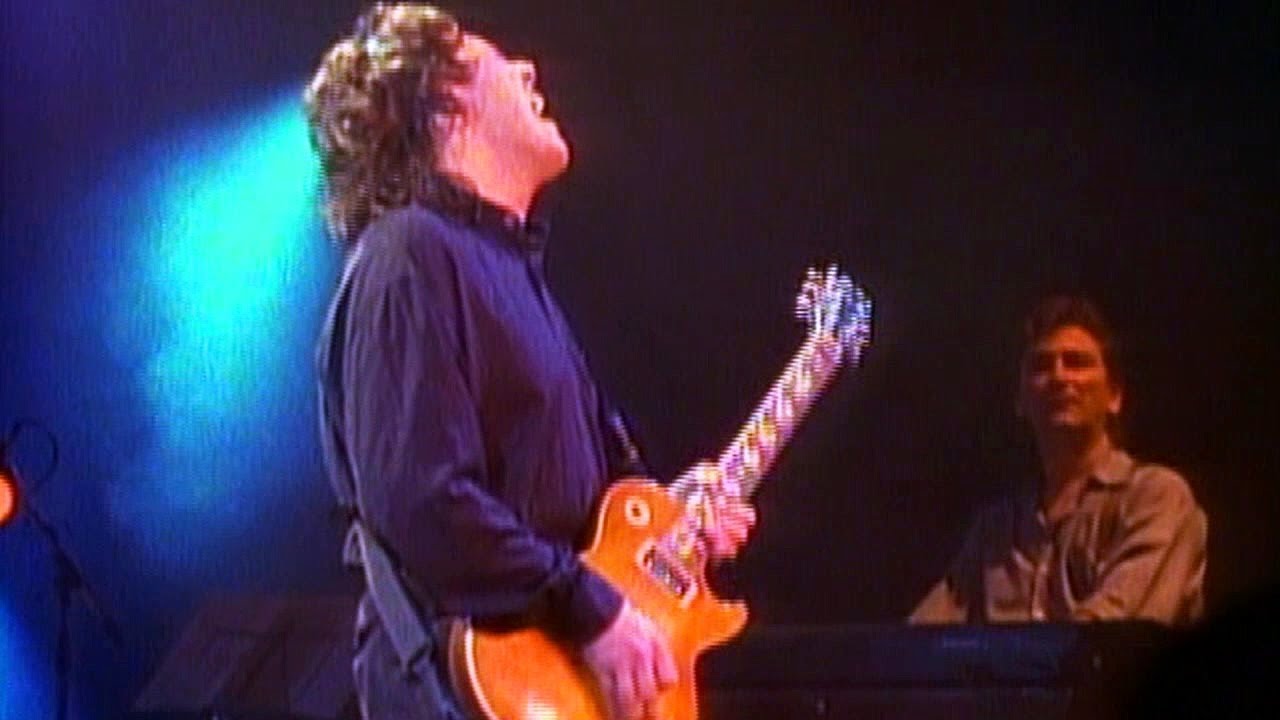 @kamkor thank you, tone is high up on what I need to work on for sure. No I did not record the acoustic backing track, that is courtesy of @Richard_close2u who recorded it 12 years ago (wow I just checked the YouTube date!) and offered it for use when I posted #1 or #2.

That note is simply insane. The studio version is obviously not yet within my reach, but his live versions? Never. Just unbelievable.

A friend of mine who is big on guitar tone will hopefully be coming over at some point to help me with my amp, and tone. That’s been cancelled a couple of times now for various reasons. That will help, and learning more about my amp will help.

Re bends. Yes. I was also talking to Rick who suggested attacking the bends more aggressively. They need lots of work. I have no expected end date to have this polished, so I will keep working on it with my other practice. The song is great practice for bends anyway.

Using a humbucker in the bridge of a Stratocaster won’t match the neck of a Les Paul unless you shape the tone substantially. Even then …

… one may want to acquire an LP style guitar, something like the PRS Jason picked up. You could make it an incentive reward for when you feel that you are closer to being able to play it to your satisfaction

He would make outrageous use of his is vibrato

The other aspect is the bends.

I forgot to mention - note that Gary uses his middle finger for the bends when he wants big sustain and the ability to start with no vibrato and crank it up from nothing to full on so he can keep the note ringing.
Maybe he felt he had more strength and control using that finger rather then his third.

one may want to acquire an LP style guitar

I had an Epi Les Paul years ago, and it just never felt right. I loved the look, and sound, but it felt too big and heavy and just not right for me. My Strat feels perfect. Although I may not yet get a sound I love all the time I know it’s there from listening to others. I’m not good with my Amps. Yet. Interestingly when I was watching Justin’s lesson on Guitar Tone he talks about look and feel being the first 2 things he considers. That’s what I think too: look, feel, sound. If I don’t like the look, why bother? And if I don’t like the feel, the sound doesn’t really matter.

So much to think about ….

I do notice that he starts with no vibrato and then brings it in. I have to improve my basic vibrato I think first though.

I do notice that he starts with no vibrato and then brings it in.

Starting with no vibrato at all, and maintaining it like he does, takes incredible control, a brilliant ear and touch for perfect intonation in the bend.
Not for the feint of heart.
Most people would be on their vibrato much sooner.
He was a master.

of course Gary was a genious and one of a kind, but let’s face it the kit you play in this instance is really, really important as well

the acoustic backing track, that is courtesy of @Richard_close2u who recorded it 12 years ago (wow I just checked the YouTube date!)

Gosh - 12 years ago.
Wow.
And I did a ham-fisted attempt at the lead too.
It wasn’t great.