Just a bit of GAS going on, but as I gain some bravery (and talent??), I think about open mics and the like. What do you acoustic players use for such situations? I’ll be playing my Larrivee OM-40, with an LR Baggs Anthem pickup. I have a Fishman Loudbox mini amp that will do well for any place that I’m likely to play.

I don’t NEED anything, but if I were to set up a basic board, what would you think most useful?

There’s a couple of good options that could work really well for you. I don’t NEED anything, but if I were to set up a basic board, what would you think most useful?

Hello Louis,
yes yes,… Don`t need…but you are now infected with the gear virus…
When I look to my right now I see a lot of pedals that I don’t need either…and this afternoon the doorbell rang again, and a package from thomann was delivered

I wish you a lot of fun with the search,
Greeting ,Rogier

At the Open Mics I go to virtually all acoustic guitarists will plug directly or via their board into the PA rather than use their own amp…not a given but generally the case. In terms of a board the ones I’ve seen keep it pretty simple - Chorus, delay and reverb mainly. Some of course do some great things with a looper as well.

Some staples on any acoustic board:

That’s the foundation. You can then add extras like compression, EQ, modulation, octave generation, looper, etc. and get as fancy as you like. Hope that helps!

There are a couple of standing outdoor jams in my area where folks bring portable, battery powered amps - that’s the main reason I bought the Fishman Loudbox - the ‘Charge’ version has a good battery system so I can take it down by the river and bother the fish!

Louis, I am one of those people Darrell mentioned using the TC Helikon Play Acoustic.

It is a multi-fx unit that combines a number of fx for acoustic guitar and vocals. It includes the TC Electronics BodyRez pedal which I found did bring the sound of my guitar when plugged in to a sound that was closer to its natural acoustic sound, as if playing through a mic rather than the built-in pick-up.

LR Baggs have similar pedals that improve the sound of an electro-acoustic, even guitars with top quality electronics (based on YT demos I’ve watched)

Then it has the delay, reverb, and chorus as mentioned by Ivan and Jason, for guitar. Plus a number of fx for vocals.

It has XLR outputs that I plug into my Audio Interface. And as Jason said I would plug into the venue PA if I used this at an Open Mic.

I’ll be playing my Larrivee OM-40

Nice guitar @LOUIS_K !
I have a Larrivee OM-2 and love it. Only hear great things about the 40 series. I almost upgraded to a forum vi, which is essentially an L-40, but I have no need for more guitar than I have right now.

You mean, this? The OM-40 was a surprise from my kids in advance of me turning 65. The F-VI was a pure indulgence, thanks to the government finally giving me back pay for Army injuries. What a sweet guitar that is! “Hooked” on Larrivee forum. 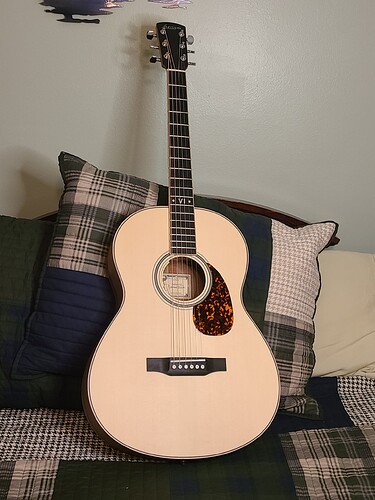 Jealous, yes, but I am still enough of a beginner that although I wanted, I also don’t need and want to wait and see what I really want in a guitar before I upgrade. I was # 13 on the list before I came to my senses.

Those are two mighty fine instruments and I bet the VI is something special!

If it hadn’t been for a nice bonus from military days, I’d never have done it as it’s far nicer than I can live up to at this point. But I’ll be 65 shortly, and decided to do something very nice for myself. I could say this is the last guitar I’ll buy, but that’s tempting fate!

Thanks Louis for starting the topic. Since I dont need an excuse to GAS, there are some interesting ideas here for future projects.