So it’s been seven months now since I found Justin Guitar and I thought the time was right to put my guitar learning experience into words, so here goes.
I first introduced myself here in January so I won’t go through the spiel again, suffice to say my story is like so many here, 58 year old learning new tricks.

The flame was reignited a couple of years ago when my wife bought me an electric guitar for my birthday, a Levinson Blade -Texas standard. I just loved the look and feel of it and so there it sat taking pride of place doing nothing until November 2021 when finally I had a rush of blood and went in search of someone who could teach me. Enter Justin Guitar.

The first months were a combination of really(really!) sore fingers, utter frustration that my very own fingers that had been with me for so long simply would not do as they were told followed by the pure ecstacy of strumming along with a tune on the Justin guitar app.

Challenges in Beginner module 1:
Initially I found the A chord and Dm were troublesome, my fretting hand and arm felt all sorts of weird stiffness and tensions. The routine practice each day soon had this sorted.
The introduction of the C chord was quite the upheaval. Once again the fingers just wouldn’t do as instructed. I learnt then that my 3rd and 4th fingers really are just followers not leaders.

I have always wanted to know how things work so around the 2 month mark I signed up for the theory course. This was just a revelation to me, for the first time I could listen to music and have a basic understanding of chord structure, notes in scales and so much more.

Beginner module 1 consolidation began in late January.
So far I had only played along with songs on the app and hadn’t really memorised any of them so I ordered Justin’s Beginner songbook online and also looked at specific song lessons on the website.
Practice songs include simplified versions of Zombie by The Cranberries, What’s up? 4 non blondes, Last Kiss Pearl Jam, Heart of Gold by Neil Young, Heroes David Bowie.
Posted my first AVOYP in Feb. WIN 20220205 16 29 01 Pro - YouTube

Late March '22 Beginner module 2 begins. Challenges so far:
The obvious one - F chord. My initial thoughts were “This is just impossible to get sounding right let alone making clean changes to mid song”. Anyway I figured others that have passed through here have managed to tame the beast, so will I. I’m still working on this but playing songs and making acceptable changes to F, so pretty happy with that.

Making air changes when going to C chord and also D chord. The first to come good was with the C chord, all of a sudden and quite unexpectedly the finger pattern formed mid change. This gave me hope that the D chord would also sort itself out which it did on the last day of May, more than 6 months in. I’m certain now that I will get to grips with the F chord.

Currently studying Module 11 and have been for 6 weeks now. Early days I was in such a rush to learn it all but now I’m really enjoying the ride and figure it will take as long as it takes.
Signed up for the Strumming module because I now see there’s so much I have to learn there. Also started on the Blues Soloing module and have been practicing Justin’s Steady thumb blues for a month now.
Practice songs now include a more complete version of Heart of Gold, Nothing else matters, Hurt by Johnny Cash, House of the rising sun, Hellelujah, Hold Back the river by James Bay and even practicing power chords on Anarchy in the UK. In fact I’m toying with anything ranging from Taylor Swift to The Sex Pistols - could there be a broader spread of musical styles?!

. I had absolutely no intention of singing or playing to an audience.
My aspirations now have come full circle in that I intend to do an OM and hopefully sing - although I have a long way to go yet before I unleash my vocals on the world!

Anyway, thanks for taking the time to read my story so far, I will update the log on a more regular basis and hopefully add more recordings of my progress.

Well done on the progress made, Peter, and starting the log.

Early days I was in such a rush to learn it all but now I’m really enjoying the ride and figure it will take as long as it takes.

Keep doing what you are doing and I look forward to more AVOYP shares. 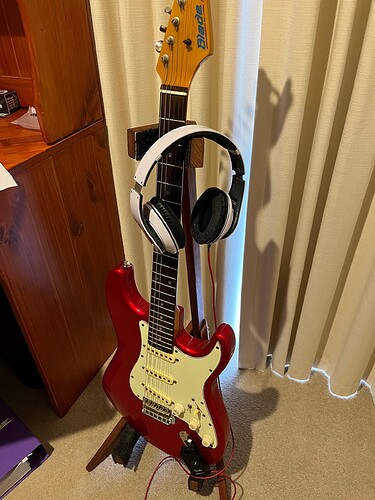 Gorgeous colour, Peter, and we already know the tone is sweet. Rock on!

Great start to the log Peter. Hoping to hear some more recordings soon!