Let's dive deeper into how to read chord box diagrams!

Welcome to the Community, AnGsuS.

I assume you are referring to this graphic: 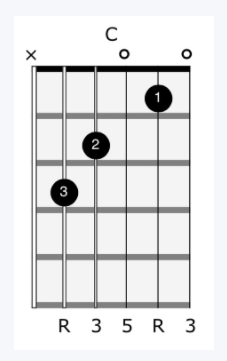 The 3 and the 5 are referring to the notes in the chord.

Without getting into too much theory, look at the C major scale:

The C major chord is made up of the notes C E G. And you can see if you look at the notes in the C major scale above that the E is 3 and the G is 5.

If you then look at the notes on the fretboard, you will see how the chord shape holds down the notes of the chord, as indicated by the numbers below the box.

Hope that helps without getting too confusing.

Can someone help me with understanding this shorthand from the test? “S6 / F3” I don’t understand what this is…

If the first, second and third string (EBG strings) are 3, R, and 5, respectively for a C chord, is it even necessary to play strings four and five when wanting to play a C chord? I would think the bottom three strings would be enough to play since they are a C, E, and G. I’m only a beginner, so maybe this gets explained later on, but I thought I’d ask since maybe what I’m thinking doesn’t make any sense. Thanks!

Yes if you play the C note on the B string with the E and G string you are Playing the first inversion C triad. By it’s self will sound very thin as a chord.
In the some context the middle 3 strings B G D are a first inversion G triad. Makes a good passing chord but very thin sounding on its own. You really need the full chord if your playing alone. Playing with a bass player the bass covers the lower notes.

@SelinaC
You have just discovered ‘triads’ …

One trick that has helped me read chord diagrams…turn them on their side by rotating the diagram 90 degrees counter clockwise (assuming you play right handed).

When you do this, the view of your hand and the fretboard is aligned with the diagram…you don’t have to mentally rotate the image to line it up with what you see.

If you play lefty, I think you would also have to flip the image horizontally, and then rotate it clockwise, but haven’t tried this myself. But even the most basic photo editing apps have this capability.

I have still not understood what R35R3 means ? Specially the RR

Chords at the basic level made are from these 3 intervals - R35 - derived from the Major scale.

The C Major scale below shows where these notes come from

Shane has posted a clear explanation, but don’t get too frustrated if you don’t fully understand the explanation. You actually don’t need to understand that part of the diagram to play from chord box diagrams. But it does help if you are more advanced and want to modify the chord while playing. It will become clear once you complete more of the theory course and learn more about scales and chord theory.

I also wanted say welcome to the community. DavidP also had a good explanation above.

When R appears below a line representing a guitar string in the chord box diagram, the open or fretted note that is played on that string would be a root note of the chord, in this case the note C.

The root note can appear more than once in the chord. In the G chord, the root note of G is played on 3 different strings, so R would appear in 3 places at the bottom of the G chord box diagram.

I know that technically root is referring to the first note of the scale which provides notes from the which the chord is built (such as Root (R), Third (3), and Fifth (5) of the C major scale to form the C Major chord) but I didn’t want to obscure my brief description of Root (R) note of a chord with too many facts. I just saw that the topic of root notes comes up again a couple of lessons later in Reading Fretboard Scale Diagrams.