Hi there, I’m after a recommendation for a mic stand. I thought there was already an open topic on this that I could check out, but the previous ones seem to have been about the positioning of mics, rather than the brand or model of particular stands that people would recommend. Any help would be appreciated.

I use these from Thomann in Germany, good solid reliable. Just be wary of duty and excise, after you know what.

The full boom can be used for standing or sitting and is fully adjustable.
Fun Generation Mic Stand

This one is a desktop boom, which is ok to use when standing but I am a little too close to the desk and PC but easier to read the aurocue

! Use it for sitting and an “audience” mic at out Open Mics.

Both reasonable priced but check the connection threads match your mic “holder” you may need an adapter.

I was a big fan of hercules stands until I had a warranty claim. If you live outside the US, they don’t have the lifetime warranty advertised on their boxes. Really poor overseas support.

My suggestion would be to make sure whatever Mic you are using (especially if it’s a condenser mic) thread at your mic is same as the stand, otherwise you might need to buy an adapter.

They still come with a 2-3 year warranty ( at least in the UK ) so pretty good. Mine is built like a tank.

The full boom can be used for standing or sitting and is fully adjustable.
Fun Generation Mic Stand

Thanks Jason, I’ll check those out.

Thanks for the advice Adrian. I’ll make a note of that.

I’ve got this one and it’s pretty sturdy: 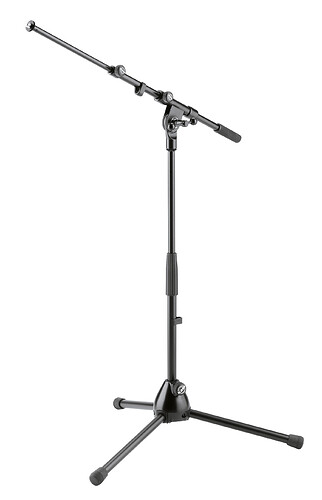 Thanks @Jozsef i really like the look of that.

Yes the exchange rate is very good at the moment. I just bought a new rack which I payed for via my UK bank and paypal and saved about a tenner on what it would have cost a week ago and for me double bonus is free delivery to France.

Despite its price its pretty sturdy and well built for home recording.

Thanks for the extra feedback @TheMadman_tobyjenner

I just wanted to thank everyone for your recommendations which have been really helpful.

I was really drawn to the Konig and Meyer stand that @Jozsef recommended as it had great reviews and looked like a really sturdy piece of kit. However, looking at the Fun Generation Mic Stand recommended by @TheMadman_tobyjenner, I think that the additional height would be helpful for either sitting or standing, and whilst it might not be as sturdy, I’m not intending to move it around that much once it’s in situ in my room. Also, the price is pretty unbelievable, and it too had some good reviews on the website.

Tracy I’ve pretty much used that one for all of my Madman Diaries series and the Open Mics even the ones where I was sitting down. The last few I have really made use of the boom facility to avoid strumming bleed on the vocals. Cheap as chips and IMHO solid enough.

I’ll give another vote for the Hercules. I have one and it’s really good.