@LievenDV @Richard_close2u do any of the regulars in the community use the App?
On here and the old forum question about the App go unanswered
There is one about the Capo feature mkssing that has gone unaswered for 10 days. I went to the old forum to see if I could
find an answer, no answer just the same question from October
with no answer.

There must be someone in this community that has the app and
can answer these question.

@MusopiaApps, the creators of the app, are on this forum as well.

They centralize all feedback and gladly take your questions on justin.feedback@musopia.net
It’s best to contact them directly about this!

please, by any means, put lieven—at—justinguitar—dot—com in cc!

@LievenDV @Richard_close2u
This still doesn’t address the fact that people are getting no help.
There are threads on the the old forum and now they’re starting on here where no help is given.
Justin pushes the app in almost every new beginner video and tells
people to leave comments on the website which is now connected
to the community.
There should be someone here that can answer their question.
I would help but I don’t have the app and don’t need it and it
won’t run on my tablet.

But there must be someone on this community that uses the app
and can help these people.
10 day without an answer here and 4 months on the old forum
doesn’t sound like Musopia is doing a very good job and it’s Justin
Name and reputation the app.

You make a very good and valid point @stitch. I’m not an app user - currently and still running an iphone 5 with 8Gb memory so no chance of running any apps on it.

It needs raising with Justin and team.
@LievenDV - one for the next meet?

On the previous Disqus platform, many app users did step in to support one another. Perhaps in the days and weeks ahead that will naturally start up again here.

@Richard_close2u I hope so Richard I hate to see people get
ignored. I know nobody is doing it on perpuse it just seems like
none of the older regular have the app.
Maybe some of the under 30 regulars could get the app so they can help with questions. Just a thought.

I agree Stitch and hopefully some new “regulars” who have started learning recently will jump in and support others. I guess most of us who have been in the community for many years just never use the app. I know I’ve downloaded it before to look at but really have no need for it as I think the biggest appeal for new starters ( that doesn’t appear on the website) is the play along part.

In the last 12-18 months I was quite active in the (now removed) Disqus conversations that each web page hosted. The app pages had a steady flow of questions that I was unable to answer as a non-user. But other JG students who were regular app users did drop answers and help in for others. I am sure the same will happen here.

Concering the missing Capo question but also about all questions and issues for Musopia, the publisher of the songs & lesson app:

Richard or I don’t do App support ourselves I’m afraid but we’ll be doing efforts to channel your questions and issues. And you’re right, feedback on that part has been a bit lacking.

No coincidence: Under impulse of Musopia, we were mailing with them during my winter holiday break and we agreed we should pay more attention of

Since we at JustinGuitar can’t solve app issues and the people of Musopia are in the best position to answer questions, we need to get them straight over there.

We also agreed to mention their account and create a tag “Lessons & Songs App”, in order to have both push and pull triggers.

I just mailed the address to mention this thread myself btw.
We still need to try these things out to see what the most optimal ways of follow up can be.

I’ll hold my hand up and say I got the application a few months ago but haven’t been using it that much lately as been using Justin’s song books recently. If I see any application questions pop up when I log on I’m happy to fire up the application, take a look and give my thoughts.

@Socio
Thank you James. That’s what we need. Do you know how to
use the capo feature on the app? That seems to be a question
that pops up the most. Once someone figures it out and posts
the answer here it can be pinned at the top of the app topic.

Not yet but I’ll have a look. One thing I would suggest is could we include somewhere a note saying that all issues with songs on the application can be reported to Musopia via:

Or via the email given the below screenshot: 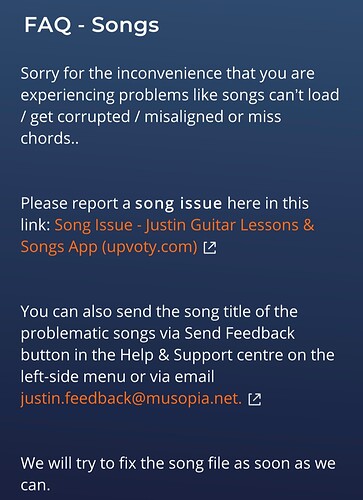 Regarding the Capo Feature: 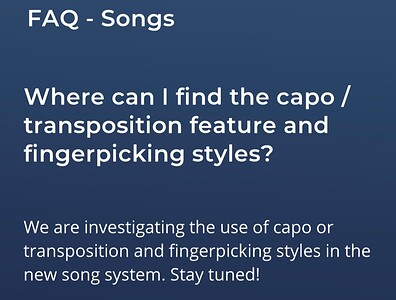 The only other app question I could see was the one with the chord shown on beat 3 for old faithful. I think @Richard_close2u answered that very well. I’d be a bit more concerned if they had shown it on beat 3 for a song like A Girl Like You. Though if you are relying on the app to play songs it could be a bit confusing for a beginner and make you think you need to strum that chord on Beat 3.

Interesting thread and @stitch is quite to raise the issue. I am not an app user and its not in my make up to learn in that manner (luddite !) but it does not reflect well when questions go unanswered.

My only constructive input to this, would be to suggest an App specific Category where these kind of issues can be centralised. It may be necessary for the mods to move items, new and old, to such an area but it would act as a single point of entry for Musopia to review new and outstanding issues.

@TheMadman_tobyjenner there is an App specific area,
you posted this comment in it. But it is hiden and you need
to search for it.
The problem seem to be the people who use the App either
don’t participate on the community or they don’t feel they
have the ability to help others.

Thank you Stitch, guess I am still trying to find my away around and there’s area I either haven’t been to or more likely not to. Now you point that out yes I see it but like you infer not quite out in the open.

I suspect there are many app users out there, who make no use of the website and its lesson, having all they need on their phones. As there is no integration between the app and the website, even if the app supports a comment area in a similar manner to Disqus it would still be isolated. So little chance of users communicating with each other but as I say as I do not have the app I can only guess.

I have the app on my phone (some of it you can still access without a subscription) there is no way to add comments so I guess anyone solely using the app is oblivious to this community (in fact no links to the community at all). Limited options on the song section, the main ones being to switch between practice, band and vocals AND adjust tempo. The song part is very well done though and a great hook for beginners.

The method of reporting technical and song issues (as well as feature requests) is quite clear on the app. The system allows you to see all the items that have been reported/requested and their current status. There have been quite a few issues reported last month. For technical issues and feature requests, I’m not sure how the community can support other than verify whether it’s an isolated issue and flag it via the back channel to Musopia which @Richard_close2u and @LievenDV have been doing really well. Kudos to them as Musopia have popped on every now and then. Where the community can really help is supporting others using the application and its features, and flagging to the moderators where the question needs flagged to Musopia. So maybe three subcategories: technical issues (Musopia), feature requests (Musopia) and user guidance (forum support)?

@Richard_close2u @LievenDV
Is there a way to lock threads down once they have been dealt with ?.
This thread was 22 days old and dealt with when it got revived

Yes. There is an a lock option.