I got the case for it (with an Epiphone logo) about 2 months ago and I was quite anxious not to make a fool of myself by having a different manufacturer’s guitar in it. 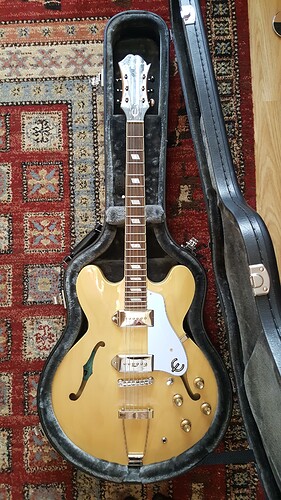 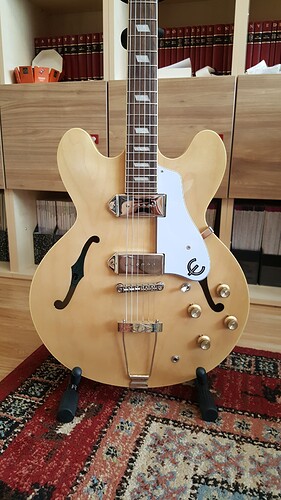 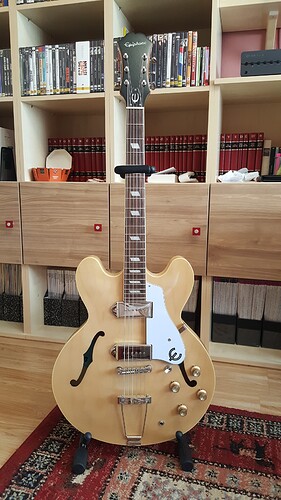 The string spacing feels a bit wider than on my Epiphone Les Paul, and it’s actually quite comfortable so far as it’s closer to the feel of my acoustic guitar.The action is a tad higher than I’d prefer it to be, but everything else is comfortable. I’ll take it to my luthier for a setup anyway hopefully next week.

The P90 pickups are not too noisy, so that’s a plus. The whole thing looks so nice. I’m sure we’ll spend a lot of time together.

I took a train to the store I ordered it from, and while I waited for the return train, I tried out a few other things they had on display. The guitar that impressed me the most was a Fender CP-60S 3-color sunburst parlor guitar: it looked fab and its sound was remarkably powerful despite the smallish size. It was also pretty comfortable to play. Also, I’m not a huge fan of Ibanez design-wise, but the AFV75 was also interesting, though the artificially vintaged look/touch felt a bit creepy as well, like trying out a beat up guitar found in a dusty attic.

I tried a Hammond Skx portable organ (crazy expensive, for me at least) as well. As I have never played keyboards before, I guess my technique is quite unorthodox, but I managed to plink Dies irae on it. There were just so many different drawbars, buttons and stuff on it that I had no idea what to do with them. To me it sounded like an organ most of the time. It was fun nonetheless.

The train ride to the store was pretty strange as there were a lot of people there who were on the move due to the war in Ukraine. At least I managed to have a nice chat with a fellow passenger. On my way back I interpreted between the ticket inspector and a pair of foreigners who took a train one too early. At least they were not fined or made to get off.

Hi Jozsef,
Congratulations on your guitar, it looks beautiful … I wish you a lot of fun playing,
Greetings…

That looks like a sweet guitar! I generally wish my electric guitars were that style. Someday to make the switch. Enjoy playing it!

Where did you have to go to get it? My brother lived in Budapest for a long time, until they kicked out the American university where he taught Anthropology. Now he lives in Vienna. I wish I had made the effort to visit while he was there, although Vienna would be a nice trip as well.

That’s rather nice, plus I just love the sounds you can get from P90’s; growl but with great clarity!
Yup those Hammond playthings have eye watering prices, way beyond my dreams

Hot diggity dog! That’s a nice guitar. I especially like the tail piece. How did you choose this particular hollow body over others?

Delighted that your patience paid off and it all worked out, Jozsef. Guitar looks fabulous and I look forward to hearing it at some point down the line.

Enjoyed the full story of the trip.

Actually, last year I spotted a Casino Coupe with natural finish at the store next to the luthier’s workshop, and it felt really comfortable to play and looked great. At that time, I didn’t know what the difference was between the usual Casino and the Coupe (the latter is 7/8 of the size and has the output jack in an LP position).

I checked out Hungarian dealers who had the Casino in their collection, and I found a store in Győr (a city in Western Hungary) that could order it and accepted payment with a benefit card instead of cash/debit card.

Some time ago I went back to the luthier and realized the model they had was a Coupe, and a few hours after that the store informed me (after about 3 months) that they received the guitar and I could pick it up, so it was an easy decision.

Why this manufacturer? Gibsons are somewhat expensive for my budget and I don’t think my abilities would warrant spending so much. Gretsch guitars also cost a lot and I couldn’t find any dealers nearby. I didn’t check other manufacturers as I set my eyes on the Casino pretty much immediately.

Oh yes, the Central European University. I think they still have their campus in Budapest but I don’t know how many courses are offered here. I’ve heard good things about them.

I bought the guitar in Győr which is almost halfway between Budapest and Vienna. I took the Railjet which is operated jointly by the Czech and Austrian railways. No wonder it’s more inviting than the basic Hungarian trains.

Fantastic. That’s a great way to find a guitar - actually holding it instead of just reading specs or watching videos. The guitar looks really cool. I hope you learn some jazz tunes!

Happy NGD József. It looks a lovely instrument. Looking forward to hearing you play it.

Congratulations, that’s a lovely guitar! Happy for you

and hope to see/hear you playing it soon!