So a new forum a new opportunity to create my roadcase…but a little too much to transfer across and give you the history from day 1 to the present. So as an alternative below is both my very first post in the roadcase on the old forum back in March 2013 (when I was most definitely just starting out) and my most recent post in July 2021 celebrating the first live performance of my band Retrospective…not bad to go from zero in 2013 to playing live in 8 years! and quite a bit has happened since then.

March 2013
So Im on 999 posts and it seemed like a 1000 posts should be marked slightly differently to reflect not only on my guitar journey but also on the forum. Not least because I’ve never posted for so long or so much on a web forum.

The guitar journey is fairly straight forward and in common with many on here. My good wife bought me a guitar in 2002 unfortunately before Justin Guitar and just before my daughter was born. Easy learner book ( and CD ) in hand I plodded along for a few months without getting anywhere. Said daughter arrived, time disappeared and my guitar began its journey around the house ending up in the garage.

Roll forward ten years, a colleagues wife bought him a guitar and I thought. … what if? I dug it out, plodded a bit and the fortunately stumbled across Justin on YouTube… and so began the journey. Over 2 years on I can play better than I could have ever imagined then. … and not half as well as I’d like. It’s taken hard practice ( most days) and lots of support from people on here. I know it takes a lot longer than you think but practicing brings tiny increments of progress that add up to a lot.

Without the forum I would have probably given up. At the start it provided the knowledge and support that I was actually tackling things in the right way. I discovered the audio video of you playing section, and the beginners song book thread ( where would I be without the bsb). I tentatively posted and got supportive feedback. I made friends DeConne, Pipsickle, Sweed77, TobyJenner, Rolandson to name but a few who were also beginners but also more experienced players and admins like close, tbav. It gave me confidence to keep practicing and learning songs.

Over time as others have come along ive seen that community spirit all the time and tried to give a the bit back I can to encourage others in the same way I was encouraged. I may not be a great player but a positive word goes a long way imho.

So a big thank you to all those that have supported and encouraged me. Lots of encouragement to those at the start of the journey and of course a massive thank you to Justin.

July 2021
So for once it’s not actually been that long since I revisited my Road Case but things have certainly moved a little so worthy of an update!

First off I’ve moved a lot in terms of performance…first taking part in a number of local to me VIRTUAL open mics and then introducing the concept to the forum which seemed to land pretty well I think you’ll agree.

Then as a duo we actually got to play live (yes really live) for the first time at an Open Mic and of course you all know how that went (as it’s posted on the Live Performance thread). Initially a bit nerve wracking but actually after a few minutes you start to enjoy it.

So the latest update (as a few of you know) is that we’re now fully fledged three piece band with real life drummer. We’ve been practicing for about 5 weeks together and it was certainly a little different to start with but seems to be working out well now. We did our first open mic together last Friday repeating one of the songs from the last one and two new songs (Dont You Forget About Me and Zombie) which seemed to go down well. A little clip below but we should get some better quality footage from the OM organiser shortly and I’ll post that in the Live Performance section for those interested. 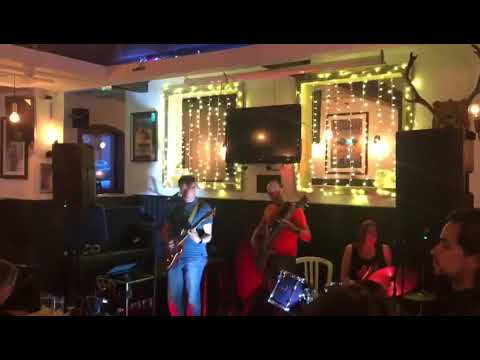 We’ll probably have a break from performing over rest of July and August as most of us have holidays of some shape or form…then come back to performing in September. We still have our booking for a Charity event at the beginning of October where we’ll be one of four bands performing. We will probably have around an hour so we’ll need around 9-10 songs ready at that point. That will hopefully get us set up for some proper gigs later on. The chap running the OM we attend is also looking to organise band nights for 2-3 bands and has asked if we’d be interested so that could be another outlet for a longer set.

Anyway that’s the little update for now! I’m doing bugger all in terms of extending my “skills” other than learning new songs and rehearsing…still it forces improvements in other ways.

For all of those wondering will Justin Guitar really teach me guitar…take a little trek down my memory lane on Sound Cloud and get accustomed with my first Three Little Birds recording (it’s still there)…that was only in 2014 so not so long ago!

So borrowing from Toby’s Idea I’ve collated all my Soundcloud tracks in to a playlist so it’s easy to share here.

This is very interesting because it is a potted history of my guitar learning journey over the last 7 years. I did do a minor cull some time ago but I retained tracks from the whole period of time including my very first two (Mad World and Three Little Birds). I haven’t posted anything new there for probably a year since I very much moved across to YT.

Interesting to see how much of my older songs are all acoustic whereas as now I’m almost 100% electric…something I intend to change in the new year.

Anyway for those looking for a “journey” feel free to listen.

Here is a link to my channel with separate playlists for my Solo Covers and Band Covers/Rehearsals.

Good job, Jason. Your journey is an inspiration to me. It’s been encouraging to track your progress from the time I joined here nearly 5 years ago. And the insights, information, and encouragement you share with all is invaluable.

I think the opportunity to collate recordings using playlists in YT or SC, starting afresh in the new Community, is a great way of not only reviewing your own progress (let’s face it how many times do you go back and listen to those early days ?) and seeing how far you’ve come but demonstrating to others what cam be achieved.

Thanks for sharing Jason @Rossco01 .

You are impressive Jason, for so many reasons. Thankyou for being the inspiration you are.

Oh your Wonderful Tonight is beautiful, along with many others. Great progress through your musical journey. I listened to several and you keep getting better and better. You have accomplished so much in eight years. Oh, and Wicked Game - all of them were great!

That is very kind of you to say Pam and thank you for listening to some - very old - songs. Good to still have them to track how I’ve improved over the years.