First off the best wishes for 2022 to all of you and may this be your best year ever!

Building my learning log from scratch, a little background on my history, who is this Sebbe guy anyway?

So I’m Sebbe (actually Sebastiaan, but some people found that name too long to pronounce so they bashed it to what I call myself here) and I live in the east part of the Netherlands, not so far from the German border.

My interest in guitar music started way back in the eighties when I was a little kid. (Born in 1981)
The video of Queen’s Breakthru with the band standing on that train wagon was one of my most iconic memories of that time.
It would eventually take a while before I would pick up my first guitar. That would be 2004 when a studymate who actively plays infected me with the guitar bug and I bought my first guitar. That was a black mexican Telecaster 72 Custom I purchased in a short sabbatical during my study years. Unfortunately work and a new study had thrown my new hobby in a hiatus and the guitar was gathering dust. I eventually sold the guitar to my studymate and wouldn’t touch another guitar for a long time.

Until Covid hit in 2020. Forced to work from home and more free time to spend than ever, why not make my passion for the guitar a reality and finally start playing this time? I bought myself an acoustic in april that year and started with online lessons on youtube. That worked fine for the first basics but progress would be very inconsistent when your jumping from one online teacher to another.

And then I found Justinguitar. It finally gave me a structured manner to learn and progress in my preferred tempo. It motivated me to buy a new electric as well (Another Telecaster! I’m a simple man that loves simple guitars) and set a goal of practicing at least 25-30 mins a day. Starting out with the song app and later on with the online course I worked my way up through the first two grades (twice, I’d like to consolidate) by the end of 2020.

In 2021 my main focus was mainly on learning and playing songs(thanks Richard!) and my songlist grew expansively to around 25 songs. In september I also found myself a local guitar teacher that gave me guidance in my playing and turned out to be a great addition to what I was already learning on Justinguitar.
Another highlight last year was a little jam session I had with my buddy I mentioned earlier that lasted at least 2 hours. Unfortunately he didn’t have my old guitar anymore but it was fun jamming away on some songs with him and exchange musical ideas. Something we definitely do more in the future. As for 2022 I don’t have any specific goals except playing full songs and work my way up on grade 3 and eventually grade 4 on Justin’s course.

Finally some pictures of my gear; 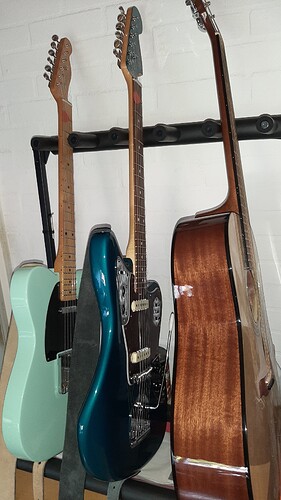 Fender Princeton 65ri and some pedals that I use when I feel like it: 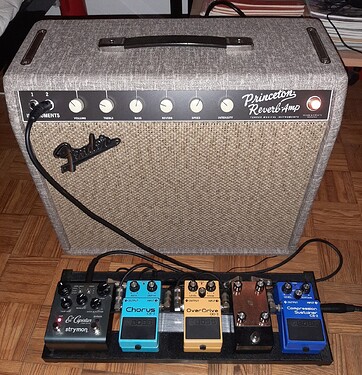 That’s it for now. On to the next update.

Welcome Sebbe. What a great introduction to your guitar journey. I like your set list and am looking forward to you posting some videos.

Great recap on the journey, Sebastiaan. I’ve enjoyed the recordings you’ve shared and look forward to more in 2022.

Upate on the hottest day of the year,

Long time since I updated over here but still practicing and mostly trying to play full songs from beginning to end. I can feel the guitars battling against the heat but they bravely try to hold their tune.

So far I have these songs memorized from beginning to end and played along with:

Next up will be Sunshine Of Your Love practicing on my newest guitar:

Also working my way up on theory, especially in finding my way on the fretboard. It would be fun if I could create some of my own musical arrangements.

Keep on making music everybody, up to the next one!

Hoi Sebastiaan,
Long time no see…okay to be honest, first time from my side

…Good LL and nice gear. I don’t want to put any pressure on you,…but a video with a song often says more than a thousand words… In any case, good that you keep your LL up to date…

Thanks Rogier, since I don’t post here that often it’s no surprise at all you haven’t seen me yet. About the video part, I’m working on it. I already posted some videos in the past but that was on the old forum. I will upload some of the songs I’ve mentioned in the last post when I can get GuitarPro up and running on my laptop so I have something decent to play along with.

Good to hear from you again, Sebastiaan, glad you are well and still playing.

New SG looks fab and certainly would be the business for some AC/DC. I think Derek Trucks also plays slide on an SG … nothing wrong with emulating him.

Hi Sebastiaan, nice gear. Very good you have built up some repertoire. At the end even if the practice and learning of new skills can be rewarding by itself, the ultimate goal are the songs.

Nice SG, the original design trem as well, love it!
Here’s an interesting song for you with that guitar (but in white) Sister Rosetta Tharpe, This train - goes back some!