I started playing guitar because I wanted to accompany the songs we sing for our kids. To learn playing properly, I started with Justin’s course. I just started beginner grade 2 and enjoy power chords and the blues. To get me started, I bought a used guitar and amp – a Yamaha Pacifica 112v and a Marshall Valvestate VS30R (a marketing gag since only the 65W and 100W have valves in the pre-amp) as a cheap “bundle” from another person.

So I figured there are some possible solutions all with a different price tag.

Do you have any recommendations how to have such a setup working and which could be best practical setup?

As it happens I received one of these for Christmas, I use it with my PC and it’s really easy to use.

Buy a Katana 50 MKII which has an aux

I also have one of these. I understand what you’re saying about the pots, as mine too sits under a desk when not in use. When I use it I just pull it forward a little to make it easy to get to the controls (the line in is on the back anyway, and I don’t leave my lead connected).

While I don’t have an iPad I’m happy to answer any questions that you may have on either of the two items above?

Something else to consider is an iRig: IK Multimedia - iRig 2

One of my old housemates had a Mk1 that he plugged his headphones into along with his electric to practice late at night (the amp connection is optional), and I know it works well with an iPhone or an iPad.

Welcome to the community LaZe! If you’re wanting something smaller to maybe put on your desk rather than underneath I use a Blackstar Fly 10w amp. It has a headphone jack and line out so I just plug it into the audio jack of my PC then plug my headphones into the amp and it sounds really good. I can follow the lesson and still hear my guitar. Plus it only cost me $50. Note: it uses 6 AA batteries or you’ll need a power supply, sold separately of course…wish I had known that before I left the store when I got it.

Other than that I like your idea of an interface and/or the Katana, both of which are on my gear wish lists for this year as I want to also get into recording. Far be it from me to discourage gear acquisition as long as it within your means. Glad you made it here to the community and enjoy!

Same here but I’m using a blackstar debut 10e. It’s main powered and about 15cm x 15cm so tiny really but does everything you need for a small practice amp costs ~ £60. Or you could look into multi-effects pedals like the Hotone Ampero One, it allows you to input a backing track through an aux-in port and then plug headphones directly into the unit meaning you wouldn’t need an amp at all.

Yamaha sells a model called the Silent Guitar. It’s a great option for playing through headphones or through an amp. Nice thing is you only need the guitar and the headphones with the silent guitar and it’s suitable as a travel guitar. It’s got an aux in so you can feed your smart phone into it as well.

These are not directional, so you plug it in the headphone out and plug your phone into one and your headphones into the other.

You can also look at the katana mkii head. Smaller and more versatile than the katana 50 mkii. Or the katana air. One katana issue is the amp can be controlled by knobs, tab or computer, but there is no Apple app, only android, and the Mac drivers are finicky.

The Fly3 is a good option and the Bluetooth one works well. Or a smaller option like the fender micro.

Another option would be a multi effect pedal. Cheaper one like Zoom G1. I have a Boss GT1. Most of them have aux-in for backing track, and headphone out. You don’t even need the guitar amp when you do silent practise.

VOX plug in amp can be also considered. It has aux in and headphone out. And it is quite inexpensive.

Over Christmas vacation, away from home, I carried my Yamaha Pacifica 112V, decent quality “over ear” headphones, and an Apogee Jam+ USB Interface, allowing me to continue my practice unabated…it worked very well. The Jam+ comes with various cables, including a long Lightning cable to use with my iPhone. There’s also a headphone jack on the Jam+. Plug the guitar and headphones into the Jam+, fire up GarageBand or another app to handle the input (I used Positive Grid’s Bias FX 2), then plug the Jam+ into the phone. With this setup, I was still able to use Justin’s mobile app to have the playalong songs.

The Jam+ can plugin to the desktop and serve as an interface, but I’ve not tried that as I already have a Focusrite 4i4 in place. 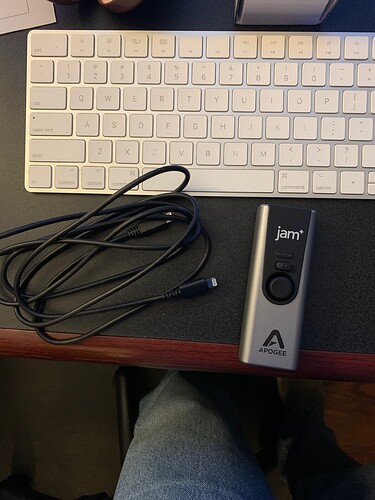 I got an iRig 2 from a friend for testing and it is really fun. Bias FX 2 Mobile is currently on sale. Which version do you use? I have no idea if I will want anything in Elite. Professional seems to be enough.

I just have the standard version of Bias FX2; seems to be all I need at this point. I saw that sale though. I might think about using software more if I get an iPad or something, but right now, when I’m at home, I just use my amp and skip software altogether.

Have a look at the Fender Mustang Micro. For me as a beginner its more than adequate for practicing, with a decent range of amp models and a selection of effects. It is a little multi-FX box not much bigger than a match box, and it plugs straight into the jack socket.

It also connects via bluetooth to a phone or tablet, so you can have the justin app and your guitar in your headphones at the same time.

Battery lasts for about a week of my usage (30 mins a day or so) and charges in about 2hrs. 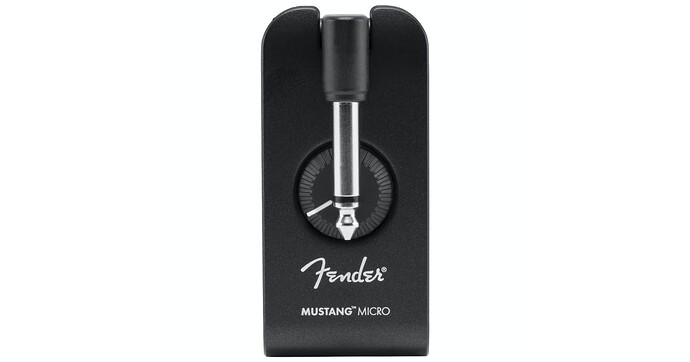 This thread may help, too.

I am a beginner and about to buy a new electrical guitar, thinking of a Fender Player Stratocaster. As I have to do a lot of practice at home I want to start with a headphone amp like the Vox Amplug, Fender Mustang Micro or iRig 2 or something similar. I must be able to play the music from my phone at the same time in the headphone and the rest will be extra. It would be nice to connect it sometimes to garageband or use an amplifier on the PC just to see how all this works as I am new to all thi…

Thanks for all the many suggestions. After testing the iRig2 from my friend I decided to buy the iRig HD2 which is a lot better but not too expensive (79€ in Germany). I also bought a fret wrap to get rid of that shrill sound that originates from behind the nut and between the tuning pegs. Now it is really quiet and one can hear the sound of the guitar very clear and nice and I can enjoy my guitar even when the kids are sleeping.