Snow is better than cold

So how much snow did you get @SandyMusic ? We got about 8”, with 5 cm more expected today. Cumulatively I don’t know how much we’ve had this year, the snowbanks distort that a bit. It’s up to minus 6 C though, can’t complain about that. 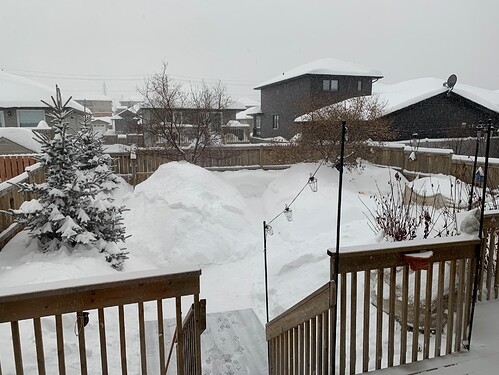 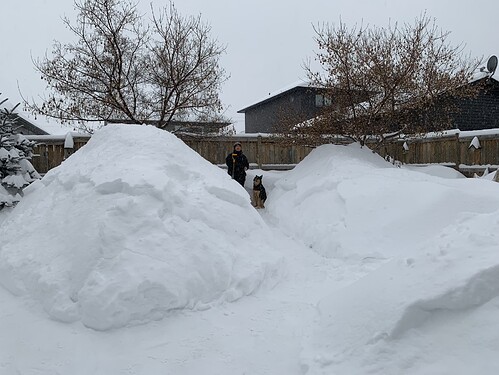 Hi Mari… so far this year in Montreal we’ve had less snow, but it’s been horribly cold since after New Year. We had 20 cm Friday to Saturday. Yesterday it was snowing slowly very little wind…I went for an hour walk with my sister, and 1 minute after getting back inside, the winds picked up and by the time the open mic started it was a full on blizzard, but weirdly it didn’t leave that much snow as I look at my car out the window.

Wow that is A LOT of snow, Mylo must have had fun!

Sometimes the wind can give the illusion if more snow though by blowing it all around again!!!

I prefer snow also, but with climate change and being 1600KM more south than you Mari (correct me if I’m wrong, but you are in Thunder Bay?) we’ve had a lot of whiplash weather this year… I mean -33C windshill early morning to +3C by late afternoon, and full on rain the next day, then -28C overnight. It’s been crazy.

Yes that’s for sure, Krista was cursing Mylo out (lovingly though lol) earlier for leaping to the top of the snowbanks and cascading more snow down for her to shovel!!

You’re right. That’s what happened. But it was nice to see. I missed the huge storms we used to get as kids down in the Gaspe Peninsula where I grew up till a teenager.

It seems even colorado is having “whiplash” weather. Over 60 F yesterday and today. 8” snow last Wednesday and single digit (F) coming up. T-shirt to snow pants in a matter of hours!

Yep, Thunder Bay. I didn’t realize it got so cold in Montreal, apart from the occasional ‘fluke’ like in TO. I’ve been to Montreal a few times as an adult but only in the fall (which is gorgeous of course, I had a view of Mont-Royal out my hotel room). I’ve had enough of the cold weather for this year, snow is an improvement!

That is definitely a big change!!

It’s crazy… the last few winters it’s been getting worse.

Toronto is more south and they usually have a warmer winter than us. They take out the army for a snowstorm (LOL- that happened a long time ago). We seem to be getting less snow every year… and February is usually very cold. Maybe with climate change… we’ll have balmy weather like California. I can only dream. Summers are getting worse… days on end at 30C + and high humidity, weeks on end living in air conditionning. I can’t stand it.

I may actually remember that! When we lived in Victoria for a few years they’d close the entire city down when it got below ~ minus 10. We thought that was pretty funny, didn’t realize though that heating systems weren’t meant for that kind of weather so we’d all have frozen if we had to stay at our offices!!