OK I have my drum grooves, Intro, Verse , Filling, Ending

But I am not sure in the beginning how long I need each to be
they might be a few seconds longer or shorter, So I need to adjust the length and placement of each at when I finish my guitar performance

How do you do this?

Should I just first bring my drum verse on my drum track
then play my guitar to the rhythm and After all is over
sit down and split it to intro, verse, filling end etc?

Or is there any other way ?

It depends on your aim but, if the aim is to produce a polished final product from a multitrack recording, then you have options.

You can record the guitar track to a metronome click or a simple drum track (such as the chorus beat) and then adjust it afterwards, changing the drum track to match the distinct sections.

Or you can calculate how many bars are in each section, and may the drums out accordingly so that you can record to the drums already set out in the correct structure.

If you don’t know the song structure and aren’t sure how to work it out, the first approach is probably better for you.

But normally song structures are not that hard to work out. You will need to know the time signature (e.g. 4/4, 3/4, etc.) And then count along with the beat of the song as you play it, and note how many bars are in each section.

Often this is a multiple of 2 or 4 bars per section (e.g. 2 bars intro, 4 bars verse, 4 bars chorus, 8 bars interlude) and so on. Depending on the song, one part of the structure may be repeated, for instance the song may go something like:

Thanks a lot , exactly as I thought but what about beats ?
When I go for example to Hip Hop section I see only beats , no verse

Tom, @Majik summed it up well.

From my own (limited) experience in producing multi-track originals, the first decision to make is time signature and tempo. It is OK for tempo to change as one works on the song, but for me that is the foundation.

My approach is usually to work on the rhythm guitar part(s). Initially I used to record and evolve those using the DAW’s metronome. As my ability to play improved I now prefer a simple drum beat.

When I am happy then I will refine the drums, add the bass, other instruments and finally the vocal.

As for options when looking at hip-hop. I am not at all into hip-hop or familiar with what you are sharing so not sure how well what has been shared may translate. An approach to produce hip-hop may not adjustment to what was shared which I think works for typical pop/rock/country genres.

When I go for example to Hip Hop section I see only beats , no verse

I’m not that familiar with EZDrummer but my experience of using other approaches and applications is to not get too hung up on the names of loops/beats but focus on how they sound and whether they fit the song. The names are an indication of what genre they may fit and how you might want to use the beat, but that’s not written in stone.

I’m no expert on the Hip-Hop genre, but my (limited) experience is that within that genre, they tend to have a fairly generic beat going throughout the song with (maybe) occasional fills.

Tom are you just searching via Genre in EZD ?

If you are trying to source different parts, ie like the song structure stated by Keith, it would be easier using the Browser tab (assuming EZD3 is similar to EZD2) and selecting a Kit (if you have more than one) then the time signature you want to use ie 4/4 and tempo ie 85 bpm, that should then show a selection of Intros, Verse, Chorus, Bridge, Outro but can vary per selection. 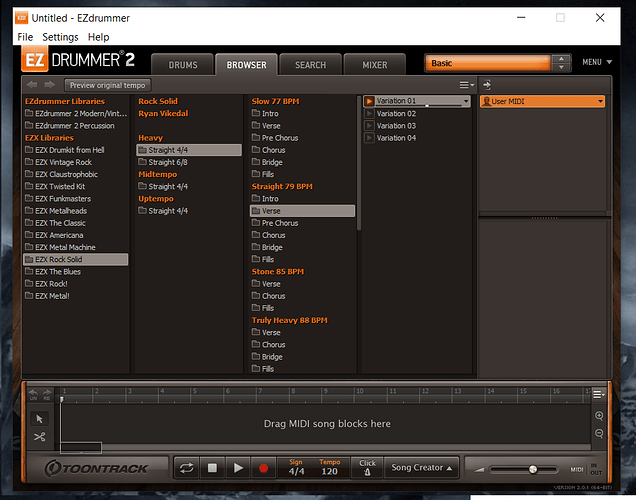 If you are building the song structure by dragging the samples in to Song Creator (for exporting midi to a DAW) each section can be adjusted in length. So a 4 bar sample can be extended 6 8 10 12 whatever or shortened to 2 for example. Click drag release, simples.

Looks like the EZD3 screen is a little different but what I mention above is covered here around the 8 minute mark but I’d suggest you watch the whole video. thanks this is helpful, I have had this question for a long time.

Do drum patters have standard names?
I know some rhytems have names for example if some body tells me play a Go Go rythem I know how to play it on guitar

I am confused with rythem names

I know many rythems on guitar , some body tells me play that I will play it please see this picture 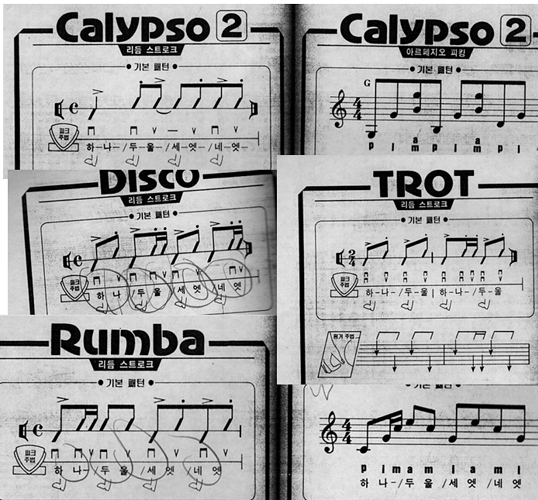 Maybe that’s a question for a drummers forum Tom. I pick a kit I like, time sig, tempo and listen to the samples until I find something that fits the song I am working on. I go by ear not labels. Have you tried Googling drum rhythm names ?

OK It seems these names are mostly used in south Korea ?

This is what I have learned

I’m not too well-versed in drumming, so I searched for “drum patterns” on YouTube and there are a lot of videos from basic patterns to more advanced ones. Maybe you could use them as a starting point to check out what the pattern names refer to and how they sound like.

Do drum patters have standard names?

In general, no, but there are common musical styles which tend towards specific patterns. Bossa Nova, for example, is typified by having particular syncopation. Bossa Nova is derived from Samba.

That doesn’t mean that every Bossa Nova beat is identical. It’s just that they share common traits that make them distinctive as Bossa Nova, and the same applies to other styles.

If you look, for instance, at the Wikipedia article on Rumba you can see that it has a long and complex history with a lot of variations and associations with other styles. So whilst the Rumba rhythm in your image probably is a Rumba-style rhythm, it’s part of a family of music which extends far beyond the simple rhythm presented in that image.

I had actually never heard of “Go-Go” and had to look it up. Apparently it is a style of funk, so in that case some funk rhythms might work for you.

It’s also notable that many of these styles are less common in modern Western-oriented music and are, often, referred to as “World Music”.

As I have said before, I’m not familiar with EZ Drummer enough to know if it has any of these styles included, but I assure you they aren’t unique to Korea.

You may find that some of the more common ones like Bossa Nova (fairly commonly used in Jazz) are included in EZ Drummer, but some of the more esoteric ones (like Go-Go) may require you to either program yourself using the drum grid (possibly by modifying a standard funk rhythm), or to purchase an add-on pack.

As far as add-on packs are concerned, there are companies like GrooveMonkee who have a range for purchase which seem to work with EZ Drummer and other tools. I’m familiar with GrooveMonkee as they have licensed some of their content to be used with MixBus 32C v7 DAW which I use. 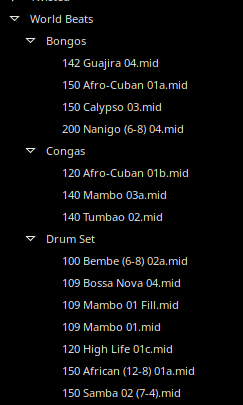 How to tell the drummer to play the groove

Obviously, I can’t tell him play for example the name in that software " bouncing loop 100 bpm hi hat closed "

I have to paly along for a while and let him follow me? There is no way to communicate with the drummer other way?

I would say that’s not a normal situation.

Normally, you would have some sort of discussion and rehearsal before performing in which you go over the songs and agree on parts and styles.

Obviously, you need to need to have some useful words to communicate so you might say “this song would suit a rumba style drumming” and a good drummer would create something, but it wouldn’t necessarily be exactly what you were thinking or what you wanted so there would probably need further discussion.

Or, another approach might be that you play the song for the drummer, and he picks up on the style and creates a drum track that he/she thinks works with that song.

This could work in a jamming environment, but there’s a big risk it would go wrong as the drummer doesn’t know the song, especially if it’s an original or obscure song and is using unusual rhythms, like rumba.

Ultimately, if you want a drummer to play exactly what you want, the only way to do that out of the gate is to write down what you want in drum notation and give that to the drummer.

Ultimately, if you want a drummer to play exactly what you want, the only way to do that out of the gate is to write down what you want in drum notation and give that to the drummer.

By the way, if you have created a drum track in your DAW using EZ Drummer, I suspect there’s a way to export the MIDI from that into a notation tool, which you could then print out and give to the drummer.

By the way, if you have created a drum track in your DAW using EZ Drummer, I suspect there’s a way to export the MIDI from that into a notation tool, which you could then print out and give to the drummer.

Or export to an mp3 and let the drummer hear it.

This is an interesting topic and something I’ve wondered about when looking for drum tracks in GarageBand. In GB you pick a drummer by name, such as Kyle, Mason or Sarah and each has a description of the drummer’s style such as Retro Rock, EDM and Dub Step. And the customizations from there seem to big on forever.