Howdy, all. I’ve been at this for about 14 months now (almost 2 mo with Justin) and know a solid dozen chords, but strumming is making me crazy. How can I know which strumming pattern is right for each song? Is it just feel? Is there some secret or formula? Hope I’m not overthinking this, but want it get it right. Thx lots

I would suggest you go through Justin’s strumming course. Once you have several strumming patterns under your belt and played many different songs, you will be able to feel the pattern with a new one. It took me about 1 year to get this feeling.

I used to obsess over strumming patterns when I was starting out. It becomes a feel thing over time.

I would make sure you can play all down strums in time along with a metronome and then to recordings of songs with chords you know. Then you can figure out where the up strums usually go. Listening and trying to tap along to the beat without a guitar also helps. Listen for the snare drums. They usually come in on beat 2 and 4 (if the song is written in 4/4).

I concur with @firstrazor re Justins Strumming course.
Its called Strumming Techniques 1 & 2. Brilliant course that will transform your strumming and rhythm in a few months.
Very practical and hands on, complete with worksheets, and very structured, in-depth teaching. Cost is about $10 AUS from memory which is an absolute steal.
Cannot recommend this course highly enough. One of his very best.

Some of it depends on how much you want to make the guitar sound like either the original or someone else’s cover of the song. If that’s the case, you need to listen to / watch the song in question.

Otherwise, it’s a matter of making sure you’ve got the timing right, for example 4/4 verses 3/4.

From there it’s a matter of feel. I play a lot of songs fingerstyle that are strummed by the original artist. Some just don’t work fingerstyle and I go for some form of a strumming pattern.

I recall from some of Justin’s lessons, he talks about the D D u u D pattern as being the one of the most common patterns. It works with many songs, yet it also starts to sound a bit mundane / beginner if you use it too much.

I would strongly recommend the old RUST 1 and 2 courses, which was rebranded as per the link. Its a paid for product but value for money. I bought the RUST 1 and 2 DVDs some years back and it really made a difference to my rhythm playing. 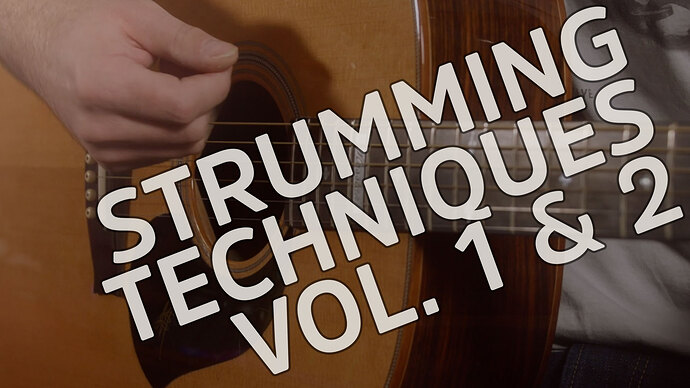 Got a problem with your rhythm playing and strumming? You're not alone, it's the biggest struggle for most guitar players! So this series takes you through the essenti...

However, I would add listening closely to songs and getting a feel for their rhythm and the pattern being used. Do this without a guitar, just listen. I would sit in the car waiting for my missus to finish shopping, listening to songs and strumming the steering wheel, trying to feel the groove. Just getting the basic tempo 1 2 3 4, then listening in between. Was I hearing 1/8ths ? Where did they fall ? Just one between 3 & 4 ,ok…so D D DUD etc, Same with 16ths. Am I hearing the guitar strummed between the 1 and the + ? As in 1+2+3+4+. Yes ! Ah so that will be an Up strum, so 1+2+3+4+ will be pumping 1/8ths all down strums. Where do I hear the 16ths. And so on and so forth. Analyse the song with your ears, might not be 100% accurate but you will be a lot closer. Try that on a song you are trying to play. Listen, interpret and note the pattern. Then try playing it slowly, does it fit ? Not quite what is missing and where, would that be up or down in relation to the other beats ?

My process but hey I am the madman !