The first scale that people learn is very easy to use and the alphabet for playing the Blues!

View the full lesson at The Minor Pentatonic Scale | JustinGuitar

So there are 5 ways to play a minor pentatonic in any key correct? Why do we need 5 different ways for the same key? What dictates which of the 5 “scales, shapes” you play ?

Welcome to the community Harry.
What dictates which pattern is where you are on the neck.
Two of the shapes have E string Root notes two have A string
Root notes and one has a D string root
Have you ever seen a guitar player start close go the nut and do
a run all the way up the neck to the body?
He is connecting 3 or 4 pattern as he moves up the neck.

Also there are way more than 5 patterns. The CAGED System has
5 which is only one way to look at the fret board. And the best way
to start.

For each scale, there are a certain notes and you can find those specific notes all around the neck. Groupings of those notes close to each other on specific place of the neck is what we call a pattern.

@harryr3 There are five patterns and all spring from a way of describing and mapping the guitar fretboard using what is called the CAGED system.
CAGED is an acronym of five open-position chord shapes, namely C major, A major, G major, E major and D major. The cowboy chords you learn in the beginner stages.

If you worked through this lesson you will have already met the C major scale and hopefully grasped that within its many notes sit the five notes that get played when you play a C major chord. 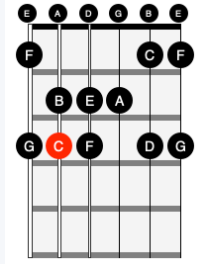