I’ve just had an iOS update for transcribe+. This new version implements a policy change by apple that prevents the change of tempo for tracks held within Apple Music. Since it’s an apple policy it seems pointless looking around for other software.
This is a real nuisance since I subscribe to Apple Music and load these tracks into Transcribe+ and play along. No surprise that it’s really useful to be able to change that tempo. Booo to Apple.

I use Spotify for that reason, Apple has always been difficult about anything concerning Apple Music, however I do prefer to use an iPhone or iPad.

Anytune does not support streaming either. I end up buying the track from iTunes, and then loading it into Anytune…even though I’m a paid Spotify subscriber.

This is a annoying, but I do it anyway, because it’s a small price compared to all the time I’m going to put into learning the song. Being able to slow down, loop, and transpose to different keys is worth the time and money, IME.

The only app that works with Spotify that I’m aware of is ASD (Amazing Slow Downer). But I absolutely hate the user interface, and continue to use Anytune.

I’ve turned to YouTube. Created a playlist and picked the artist original track. Tempo control is not as flexible as with Transcribe+ but maybe good enough.

Well YouTube didn’t work well enough. Now buy the tracks for 99p from Amazon music and download as .mp3. Loading this into Transcribe and it is possible to modify the tempo.

Basically, the same way I use Anytune.

Does Transcribe support looping a selected passage in the song?

Not sure if this is the missing feature in iOS that seems is to be reinstated in the next update expected by end of May. 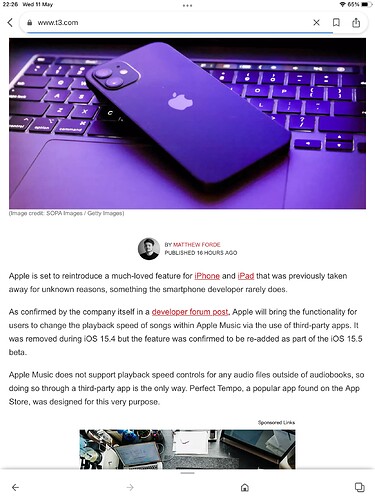 Yes it does do the looping.
it was your reply that made me think 99p isn’t much in the scheme of things so thanks very much for taking the time to respond further up the thread.

I see that iOS 15.5 reintroduced the ability of 3rd party apps to change the tempo of songs as per above comment. Let’s hope this fixes the issues with Transcribe+

iOS 15.5 reintroduces an Apple Music API that allows third-party Apple Music players to change the playback speeds of songs. The API was removed in iOS 15.4, but it is being put back in iOS 15.5.

I’ve successfully changed the tempo of tracks from Apple Music in Transcribe+. So that’s all good then.