Great lesson as always, but this certainly takes a lot of perseverence from me. I do so because it should make changes between certain chords to the G easier but am still finding it unnatural especially if a quick D chord is the next one like in Working Class Hero.

Hi all,
I have a more general question on thumb position when playing open chords: I’m intuitively putting my thumb close to the low E string. I often use it to mute that E string when playing C, D, Am etc. Now a guitar teacher told me that I should I in general aim for my thumb to be on the back of the guitar neck. However I see lots of musicians routinely having their thumb up ready to mute the low E or play a F sharp for the D chord etc. What is best to progress? Thank you!

As a beginner your thumb should be in the middle of the neck
to strengthen your hand. Justin mentions this is many videos.
It will build up the strength you need to play barre chords.

As a advanced player you will find your thumb will move all
over the neck.

Just noticed that the original post by @JGAdmin has a typo in it and refers to the Weak Finger F Chord.

Sorted - thanks for the heads up @socio

I’ve only just started using the weak finger G, for Behind Blue Eyes. Not because it helps with changes, but because it facilitates a Gsus4 embellishment by simply dropping your first finger.

Yeah, for some F chord changes I’m repositioning my fingers, because it’s easier to switch-up anchor fingers, but regards to weak finger g, even doing this the way Justin does feels unnatural for me, like there is tension in the tendons or something. I don’t like this

Yeah, use whichever feels more appropriate for a given song. For example, I tend to use the weak finger G when there’s a change to/from open Am. That way the 1st finger is always close to its place on the B string.

I’m having a really tough time with the 3/4 G grip. It is still by far the most difficult shape for me to form, even more difficult than barre F.

The problem is my fingers 3 and 4 do not seem to be able to “curl” independently. If I try to curl my 4th finger, my 3rd finger curls exactly the same amount, and likewise if I try to curl 3. So there is no way that I can curl up 4 and leave 3 extended.

The only way I can form this shape at all, is by putting down the fingers one at a time (in either order), which is obviously way too slow to be used in a song.

For me, the 3/4 grip is so uncomfortable it is actually way easier for me to do it with 2/4, even though I have not put in any practise with 2/4, if I mentally tell my hand to make that shape, it reaches up with the 2nd finger instead of the 3rd.

It doesn’t seem like this is a common problem and I am curious about what is going on with my hand that makes this such an impractical chord grip for me.

For just playing a simple G chord in a song, I tend to just use any of the other G grips and avoid the 3/4 grip because I can’t do it at tempo. But for example in “Patience” I want to be able to drop my 1st finger down on the B string, to get that 1/0 flick-off, and it seems like the 3/4 grip is really the only way I can make that work.

Am I missing something about how to practise this? Because using the same approach I’ve used for all the other chords is getting me nowhere with this one.

Hi Brendan, I also had a difficult time with the Stuck 3/4 G Chord. It took me several weeks to be able to form it while changing chords. Due to an old injury, my first joint of my third finger was broken and is way skewed and I can’t bend it up fully. In addition, fourth finger has a “curve” so I’m not able to set it properly on the fourth string. I wasn’t able to set fingers three and four as it should be. Was really frustrated and thought, I’d never be able to play it correctly. But after weeks/months of constant training, it now works quite good. Don’t give up, it’ll be better with constant practice!

Hi, thanks for the reply. Just to make sure we are talking about the same thing, I am having trouble with the “Weak finger G”, not the “Stuck 3/4 G”. I can play the stuck 3/4 G just fine.

What I’m struggling with is this grip specifically: 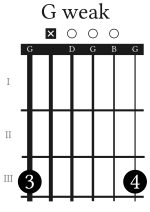 Run through a cycle of playing each of these helpful chords / chord shapes that will train your fingers, hand, wrist and arm to feel comfortable in these positions. 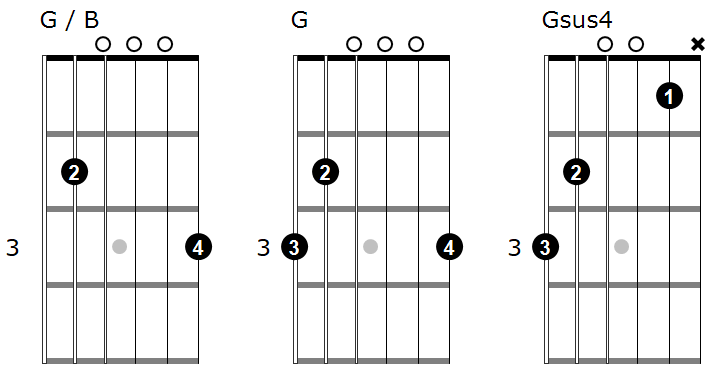 Note that they are giving opportunities to either accustom your 3rd finger or your 4th finger to get into position for the weak finger G chord.

For me, the 3/4 grip is so uncomfortable it is actually way easier for me to do it with 2/4

Sorry, if I got that wrong… I read this maybe too fast

No worries, that’s partly my fault for using the expression “3/4” when talking about the Weak Finger grip. It made sense in my head at the time but I can see how that would have been confusing.

The only way I can form this shape at all, is by putting down the fingers one at a time (in either order), which is obviously way too slow to be used in a song.

Hi @direvus, I think this is normal for some people and some chords. I remember some chords I couldn’t form without putting fingers down slowly one-by-one. My pinky was useless.

I remember trying to do some chord changes where I wanted to leave 2 fingers down and move 1 finger, or move 2 fingers and leave 1. I would look at my left hand and try to do it and I couldn’t. I couldn’t move individual fingers independently. I had to train my hand by using my right hand to move the fingers that had to move! Impossible to change chords like that in a song. It was agonizingly slow I even remember one of the songs I was trying to do that with, Free Falling, and I really wanted to play it.

I just repeated it - a lot. Eventually I was able to do it.

Now I can do all of that automatically and air-change to most of the common chords.

Thanks Richard. I am fine with Gsus4 and other similar grips like C, G7, etc. Those are no problem, just the usual practice routine will get me where I need to be on those. The G/B grip is one I haven’t tried before, it feels a little stretchy but definitely achieveable. With the G grip you have shown, I have the exact same problem as for Weak Finger G, only slightly more difficult because I have to put down 2 as well.

I must say I find adding my 2nd finger to B (2nd fret A string) makes it much easier for me. It’s then a 3 fingered chord but is a quicker change as I anchor on my 2nd finger during the move.

Should I persist in going for the 2 fingered version?

I just wanted to close the loop from my earlier posts. Relentless practice has improved my ability to do the weak finger G grip, although it remains my least favourite way to play a G, I can at least get there at tempo, most of the time.

I had to shift my thinking a bit about how I position the fingers. Instead of trying to curl my 3rd and 4th fingers independently, I curl both of them the same amount, and then while keeping them curled, I draw the pinky “back” while pushing the ring finger “forward” and that motion gets them into roughly the correct relative placement.