Where to go with pentatonic scales? Advice needed

I’m sure you’ll be able to help me out on this one. I started my guitar journey about 3 years ago and I’m proud I stuck with it for so long. Almost 1/11th of my life so far

One of the most widely utilized tools out of what I learned so far is pattern 1 of the minor pentatonic scale. I’ve been playing it for years now, and managed to play along to some songs in a bluesy vein (the latest one is I Want You (She’s So Heavy) by The Beatles). I can play the scale in itself ascending and descending as well, though never attempted to play it (or anything else, really) at a lightning-fast tempo. So it’s been all fun and very useful for me so far, not least because the pattern can also serve as a hint when trying to transcribe (with or without paper) some melody lines.

And here come my dilemma and questions which I’ll try to sum up in a logical way. Basically: whither next?

Thanks for your answers in advance.

What style of music do you like Jozsef? The minor pentatonic is a fun scale but doesn’t fit all music. If you’re not a big fan of the Blues and Blues based Rock then your not going to get much milage out of the minor pent.
There are 5 patterns for the Pentatonic Scale. I say Pentatonic because the Major and minor use the same patterns but different root note. So the 5 patterns have both a Major and minor root note. You said you know pattern 1 of the minor pent so you also know pattern 5 of the Mojor pent. So maybe this could be your next move. Learn how to use the pattern as the major pent.

You mentioned figuring out melodies. The Major scale is better for this.
As for harmonic and melodic scales this video will help What is your experience with the Major scale?

By all means learn Pattern 2. And the top half of it blends with Pattern 1 to create an amazingly useful ‘extended’ pentatonic pattern that is used lots.

If you want to extract more goodness from Pattern 1, and you haven’t actually learned and used licks, see if this helps:

Thank you for your answer stitch. I like quite a few genres including “classic” rock like Led Zeppelin, Black Sabbath, Deep Purple, The Beatles, Rolling Stones, etc. I’m also keen on jazz from the 1950s onwards, whether it has guitar or not. Miles Davis is one of my favourite artists in general. Jazz fusion (Miles and his circle), hard bop (Grant Green and Art Blakey are also among my favourites), post-bop and some spiritual jazz (Coltrane, Pharoan Sanders, McCoy Tyner) seems to be my main interests there. I like funk as well, P-Funk, James Brown and several others are mainstays for me. Fela Kuti is another one, though he played afrobeat which is somewhat different. When it comes to soul music, I prefer the so-called psychedelic soul of Sly & the Family Stone and the “progressive soul” of Curtis Mayfield and Isaac Hayes.

I may have been a bit ambiguous when I mentioned I’m not very keen on “B.B. King and Buddy Guy-type of blues music”. When it comes to blues, I like acoustic blues recordings, e.g. Folk Singer, Father of the Delta Blues: The Complete 1965 Sessions or Robert Johson’s original recordings. But I like slightly newer approaches like Hot Tuna, too. As for blues rock, Cream and most things Clapton did, classic Canned Heat, Johnny Winter, Taj Mahal, Dr. John, etc. are high up on my list. Things that put a little twist on the traditional things and/or have a bit more bite. There are probably others I’m forgetting now.

So I’m not saying I don’t like this kind of music at all. It’s just that I can’t see it becoming my main interest and me doing the whole Robert Johnson songbook, for example. I don’t know, maybe it has something to do with me not being a real part of the British/American musical tradition in the sense that the blues (and its history) is loaded with the suffering of a particular group of people, and however much I like song like Love in Vain, Crossroads, Hellhound on My Trail or The Thrill Is Gone.

However, I wouldn’t like to neglect the aspect of “musical literacy” either, I mean knowing what a certain scale is (or even recognizing it when played) regardless of the various patterns. I remember Justin’s video you linked and I agree with his point. I definitely won’t rote-learn scale patterns just for the sake of it.

Sorry for being a bit long-winded but I hope I made my situation a bit clearer.

I learned pattern 1 as part of the beginner course and the PMT. I can play the pattern ascending and descending and also played with some of Justin’s dedicated backing tracks (purchased the Jam Major package). When trying to pick out melodies, pattern 1 of the MS is my other go-to solution besides pattern 1 of the Min Pent.

Thanks @Richard_close2u, I’ll definitely check those out and see where I end up with them. I may have had a bit of a prejudice against licks as such because they are presented a pretty blues-specific way, but I’m sure they are very useful.

This week I managed to improvise a bit over the Your Love Is So Doggone Good by Isaac Hayes (5:27 onwards based on the horn ostinato) using a pentatonic scale, so who knows, maybe I’ve already played some licks without knowing it.

Justin has a blues licks app (for IOS anyway). 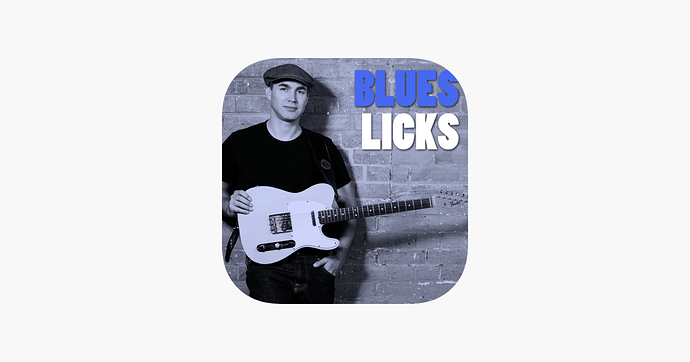 ‎The Blues Licks app from JustinGuitar.com brings together over a year's worth of content from Justin's weekly Blues Licks series into a single, easy to use app. Playing blues is a LOT about learning licks and how to use them, so as a blues...

That’s interesting and something new to me. I am not an app or Apple user anyway but surprised this has not been on the radar before. Can’t recall it cropping up in either forum, old or new. Good share…for apple peeps !

Very interesting topic @Jozsef. I had a similar question regarding my own playing: how to start learning lead guitar? Justin’s answer (I think) is to start with blues lead guitar and I get the impression that other teachers take this approach as well. I started doing the blues lead module, not because I love the blues so much, but because that was where “lead guitar” seemed to start. (In the meantime, I really did get to love the blues). I think the reason for this is that 1) blues lead guitar is (or can be) relatively simple and 2) lots of popular rock music lead playing borrows from the blues.

So, if you are interested in playing lead lines, beyond strumming chords, blues lead could be a good place to start. In learning the licks, you will learn techniques that you can use in any kind of lead playing: bends, slides, vibrato, vibrato on a bent string, hammer-ons and pull-offs, etc. You also learn the fretboard up the neck and how to navigate around. So it’s not only about the specific licks.

Anyway, that’s my experience going beyond chords and starting on some lead playing.