Here I offer some tips and some advice for all of the folks just beginning with the minor pentatonic scale and starting to explore a little blues-infused improvisation.

And start with only one pattern. 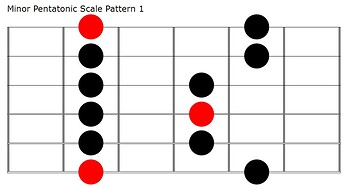 Cycling around repeatedly with alternate picking.

From low to high and back again and round and round.

Your fingers need to know where to go without conscious thought or mental prompt.

You need to be able to walk your fingers up and down the correct notes as though you had your eyes closed and were wearing a blindfold sitting in a darkened room down in the cellar of a remote house with no light source house in the middle of the blackest night.

This will take a little time to achieve. Not one practice session. Not one hour. Maybe one week. Definitely less than one month.

Once that level of familiarity is achieved then branch out the practice and adopt other patterns, rather than just ascending / descending in linear runs of notes up and down.
Play the scale using sequences of 3-in-a-line, 4-in-a-line, note-skipping etc.

Do all of this until your fingers and ears know it intrinsically.

Next, learn a lick. Just one lick. Play it repeatedly until it sounds good. This is very important.

Note: Many licks require bending technique so make sure to check the post below linking to Justin’s bending lesson. Or, if bending is a skill slightly beyond your current level, then work around that and play a lick that doesn’t have a bend. You can always slide, hammer-on and flick-off etc.

Once you have a lick learned, play it - and it only. Over and over and over. Repetition is key. Then play it over a backing track. Not one backing track – play it over several backing tracks. Mess around with the lick, vary it, extend it, shorten it, vary it again. Make it yours. Milk that lick for all it is worth until it is beginning to speak your words. If it isn’t speaking then force it. Make up some words that it could be saying. These can be nonsense at first. Just make it say something. Imagine that lick as an expression of something you want to say or sing. 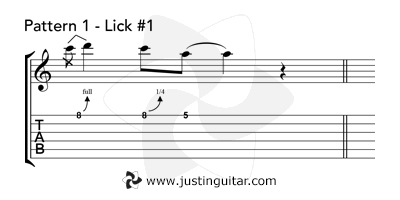 What could this be saying?

Just words.
Or sounds.
Or grunts.
Or moans.
Anything that fits expressively.

Play that lick over a backing track. Or several. Here is Justin’s 12-bar blues backing in A.

The vibe and groove and nuance of a backing can encourage you to play the lick in different ways.

As stated above, mess around with the lick, vary it, extend it, shorten it, vary it again. Make it yours. Milk that lick for all it is worth until it is beginning to speak your words.
You will find that if you discipline yourself to working only with one lick for the duration of a full track, necessity will force your hand, quite literally, and you will create variations for yourself built on the foundations of the lick. The lick itself becomes a creator of dozens of new licks. By the sheer force of ‘doing’.

By the time you have extracted lots and lots of goodness from this one little lick you may be exhausted from the blues emotion! But you mustn’t stop there. You need to take your words, express your thoughts, give a sonic dimension to your innermost pain and share it with the band. Crank up the backing track. A 12-bar blues. You’ll have a drummer, a bassist and maybe someone else along too. And you ain’t feeling too hunky dory. You’re feeling blue. You’ve got the blues. Listen to their groove, hop on the blues train, use your blues and language and tell them what’s on your mind.

Talking your words, your language, your truth.

And if you ain’t feeling blue, if you’re feeling good, then get that feeling out there. The blues is happy music too. Without the happy there’s no context for the sad.

Have you done? Is that your full ration of emotional energy spent? Next time you perhaps may think of telling a different story. You don’t want to have people turn away from you ‘cause it’s always the same old same old right!
Do you have something new to say. Or a different way to say the same.
Okay - let’s learn another lick. 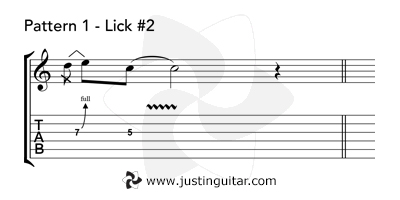 What is this lick saying? What can you say with it? How many ways can you say / play that phrase?

Play over a backing track as before. maybe the same, maybe something different. 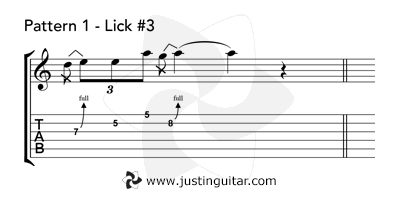 What is this saying? Most importantly, what do you want to say with it, what can you say with it?

Make this one speak. 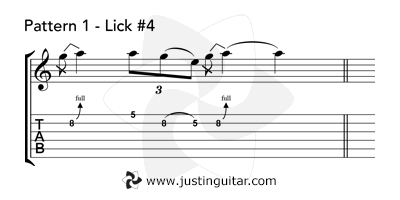 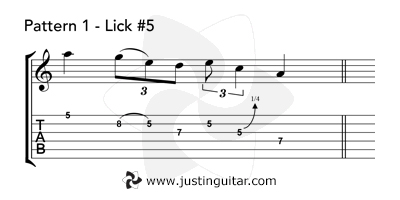 Make it cry, make it sing.
Make it do your thing.

With all of these licks you want to take them as mere starting points, as suggestions, as skeleton templates upon which you can create and build your blues sounds. Play them, sing them, feel them and mess around with them.

Before even thinking of learning a second scale pattern.

Some guitarists spend their whole lives mining the goodness from pattern 1 so don’t be in a hurry to move on and leave it behind.

Not just that, learn and play the same licks, work through the same disciplined approach in different keys.

Play over a 12-bar blues in G with the root at fret 3. Slow Change Funky Blues In G. What's not to love? :) Justin Guitar Jam Track - YouTube

Enjoy this learning process. Working within tightly restricted parameters can push you to unlimited creativity. The fact of having to play just one lick for such a long time … well … you’re going to adapt it for the sake of your own interest. Necessity is the mother of invention.

In reference to Justin’s Blues course …
Start with The Blues Language | JustinGuitar.com
It explains the rationale and thinking.

Then Bending Technique In Blues | JustinGuitar.com
looking at bending.

Then 5 Blues Licks from Pattern 1 | JustinGuitar.com
which teaches you the five licks to improvise with. These are the licks as shown above.

You will need to spend a lot of time - hours and more - just fiddling around with these to play them as taught, to deconstruct them and play them as fragments, to play them as new licks that you create by putting the fragments back together in different order. Justin does explain it really well.

Playing the scales is one thing. And you must practice them around and around, over and over, preferably to a metronome or click track at differing speeds. Alternate picking.

But using them purposefully is crucial to instilling them in your head and fingers.

You have to work with these licks, really work them. Honestly and truly, you have to play one lick over a 3-4 minute backing track and really listen how it works over the chord changes. Then do it with a different backing track that has a different tempo, vibe, groove. You will find you play the lick differently again - it will say new things. You will say new things with it. Then start messing with the licks, to do something different, putting your own spin on them. That is the key to improvising.

Justin launched a separate Youtube channel highlighting some of these.
JustinGuitar Jams: https://www.youtube.com/channel/UCBhi4PA2Ag6702jfAAffoWg/featured

Let it rip and let yourself go.

Thanks Richard. This is something that I’m looking forward to exploring when I reach the blues modules in Grade 2 and intend on spending time improvising during the consolidation period over a Trio Plus backing track. I’ll bookmark this post for reading thoroughly when I get to that stage as I’m sure that I will reap a lot of benefits from it.

Glad to help @Socio
When the time is right, drop in any comments / questions. And, of course, share some AVOYP or maybe join in with this challenge: Guitar Challenge (Improv) - 12-Bar Blues in A (Justin Sandercoe backing track)

Thanks Richard. I’ll definitely take up the challenge as part of my Grade 2 Consolidation. It will be a while before I’m ready as taking my time going through the Grade 2 Modules. But it’s good to set these goals out early to give me something to work in achieving.

Agree with this posts,directions I wish to go on.I " walked “into a Module 3 part dicussing Goal etc,Ifelt like I was cheating by taking a peak but what I read reminded me that Somewhere in an earlier Module Justin brought up same issue tough in limited terms.The disscussion was about goals but what hit home was how going off on Tangents was ok but…Anyway it gave me sense of why my fretting and is so sore from The Stuck 3 Chords( yea age has a lot to do ) but getting ahead to what id like to accomplish took me to star on Scale practice wore me out for Module Module three so in order to give it a break I went off on yet another tangent . Now ive circled back around to strumming and find that i have improved and petspective on that is more " forgiving” .I ramble on but somehow its both dangerous, of getting lost, but getting back to where Iam ,and knowing its were i need to be is amazing… this ramble allows for that…thanks for the space