coo, dont have one of those !

Same for the Katana air, btw. No app for pc, smartphone only. The app does work good, though.

I’ve just started using one of these, it’s been collecting dust for too long and coupled with a 1x10 cab and a few pedals it’s just amazing! Honestly it’s between a modeling amp and something with valves!

Not seen that though funky bit of gear

Not really. Just like the Spark amp differs from the other Positive Grid stuff in terms of which effects are supported, and the effect chain capabilities, a lot of other vendors have differences between product lines.

Boss, for instance, has the Katana ranges, the Waza Air headphones, the GT1000 series, the new GX100, the GT-1, Pocket GT, and the GT-001. There are differences between many of these and that means patches are not universally compatible between products.

You cannot, for instance, take a patch from the Katana and load it into the GT-1.

However, you do need to build the patches from scratch, and as different products have different capabilities you may not be able to completely replicate a patch from one device into another.

For instance, the GX100, GT1000, and GT-001 allow you to split the chain and have parallel effects, including parallel amps, and either blend them or switch/fade between them. Most of the other Boss modelling systems don’t support this.

Line 6, Zoom, and all other vendors will normally have similar differences between product lines. After all, it’s part of how they differentiate between them.

You may want to consider something like the Orange Micro Terror, which is a “lunchbox” amp similar to the Hotone, but has a preamp valve.

Personally, I wouldn’t obsess over valves at this size of amp though. Valves tend to work best at higher volumes, and a lot of the classic valve tones come from a a cranked power amp section which smaller tube amps do not have.

Personally, I would base my purchase on what sounds good to you and what gives you the capabilities you will use. There are plenty of decent analogue solid-state amps around, like the Vox Pathfinder and some of the Orange solid-state amps.

A modelling system will give you the most versatility, and modern modellers are generally very good. As I said before, they will never match the versatility of a PC based modelling tool. But how much versatility do you actually need. In practice, I would suggest it’s not nearly as much as you think.

But you can always pair a basic analogue amp with a multifx unit.

Notably, some modelling amps have a reasonable analogue power amp section which you can bypass the on-board modelling and plug an external multifx system into, so you aren’t restricted to what’s built into the amp.

IMO the important thing is to try some out if you can as there is no single “best” answer. Everyone is different and people’s views on what sounds good for them and works best for them will differ a lot.

This includes people’s tolerance for multifx user interfaces. Personally, I don’t mind a phone or PC app for advanced patch building on my amp, but I don’t like small screens and “menu-diving” on the physical panel: I just want simple controls that let me dial in a basic tone and to see what my settings are.

I’d absolutely go for a full tube stack of some sort if I thought it would ever be switched on lol.

From what I can see you’ve got to crank them then deal with that somehow to get the best out of them.

Even the little 5w ones you need to push.

So the Rockshop got in my amp, put my name on it (a price match) then sold it to someone else. Sigh.

What a PITA. Which one did you choose?

Going for the gtx100, upper end of the price range but seems the best all rounder

Good choice, hopefully you get it soon

Fingers crossed they should have it in Friday (pickup saturday??). Unless they sell it to someone else doing exactly the same thing again.

OK so despite screwing up once this week Rockshop have managed to screw up yet again.

So I’ve now ordered online from another company I could have done 2 weeks ago already.

So I got the GTS-100 yesterday which turned out to be a busy day in general so only had a short play.

Made it through some of the first 50-60 presets… 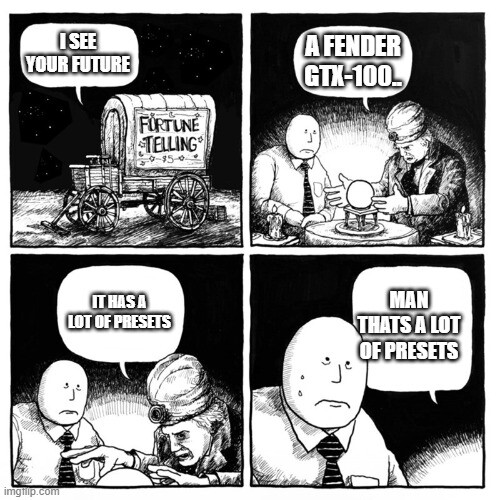 the amp sounds great, connected with the BT app and to wifi, not done a lot else but seems good so far

My advice is, don’t pay too much attention to the presets. Find a few basic ones you like, by all means, but learn how to build your own patches from scratch.

Turn all effects off to start with. Start with an amp model and nothing else. Pick a model you like, and play around with the settings for a few hours. If you decide you don’t like it, go to a different model. When you find a model (and settings) you like, that’s your base sound.

Then start playing with overdrives and distortions.

When you have a base sound you like, start adding other effects, or not. Quite often the most useful patches are the simplest ones.

You would typically repeat this 3 times: for a clean tone, for a “crunch” tone, and for a “lead” tone, but feel free to create as many, or as few patches as you think you need. These can all be based on one amp model, and one overdrive/distortion pedal, or they could be based on a mixture. In the early days of doing this I would suggest sticking to a single amp model.

After all, this is modelling traditional amps and, in most of those situations, most people only have a single amp at a time to play with: limitations are good and help focus the mind.

And, the other important thing, is to have fun exploring this stuff!.

Yeah Im all good with lots of options etc! Have that already with bias fx2 and I am a software developer so hey ho!

But I do tend to build up my own anyhow, many of the current ones are simple single amp and 1 post/pre pedal kind of things.

OK so the presets sometimes are in small groups that make sense but overall seem to be a mess so that’ll take some figuring.

And once I managed to connect it works well streaming from a phone etc too, so I can stream backing tracks etc like justins app to the amp and play over the top. nice!

I haven’t tried streaming yet on my GTX50. Did muck around with some presets, pedals, etc though. I’ve probably still only used 1% of the amp!

My fave preset at the mo is #1, which is just a twin reverb with compressor and spring reverb. So sweet. Also using Socal punk a lot, sounds like green day.

I had to disconnect the app to pair the amp as a Bluetooth speaker then I could use the app again.