I want a new guitar (not bought anything for 18 months!), got £1k to spend but happy to spend less!

I think I’ve decided to buy a semi-hollow.

Currently got a PAC112V, which I like but not convinced I would notice a massive difference at my skill level (2 years in) by buying something like a 612V.

I think the semi-hollow will give me the bigger difference in tone to what I have. Which is my main reason for going for one.

Blues is my main style & at some point I’d like to get into Jazz. I prefer mellow stuff, I rarely play with distortion.

What are peoples thoughts? Is it worth spending much more for the next leg up (delux & similar from other manufacturers) if my main requirement is tone?

ES335 types or their clones would be good for both blues and jazz. I have 2 Washburn HBs 30 and 32, plus the Gretsch Streamliner I used for my latest diary recording. The Gretsch was less than £500 so similar price wise to the D’Angelico Premier on Thomann. But mine has a Bigsby Vibrato which the Premier doesn’t. The Washburns were less than £300 from what I recall. So you should be able to get something decent for half your budget.

I should add, as for tone most of that will come from the amp and fx.

@TheMadman_tobyjenner Thanks, I get the impression there’s not much in it between the various models in the £500 range. Sounds like you are of the same view?

Ah got me there !! I just wanted a Gretsch and just fell in love with the Imperial Stain finish and pearl inlays. Could have been a right dog but turned out very nice. My TSB HB30 was a retirement present after jacking it in after 38 years. Unexpected but I must have been spotted drooling over one rather than working. I recall my colleague passing the comment that it would look good hung on a wall. So it came as a complete surprise. The wife bought (ordered - I paid!) the HB32 coz she like the look. Did not see it coming either. Grown fond of the matt mahogany finish and brass fittings all the same. But as I say happy with all three play but one day will put some hotter dirtier Iron Gear HBs on one of the Washburns just to make them a bit different. Heck might just do both and drop some P90s on one.

So as you can see not a lot of analysis or research here but no complaints either. One day I’ll use my head not my heart.

None of that probably helps ! But I reckon you’ll find something fine for around £500. So spare money for an amp per chance after that ?

Great story! I think it probably does help, don’t over think it

For what it’s worth, I have an Epiphone Dot, and I really like it. I paid around 400 euros for it, though I think it’s been replaced by the Epiphone ES-335 something-or-other.

I could fancy a Sire Larry Carlton H7 if my GAS ever emerges! 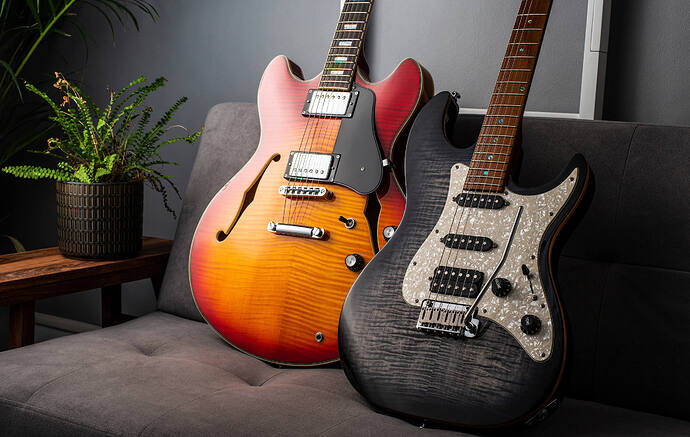 Mr 335 has put his name to a range of guitars that are nothing to do with Gibson, bringing the promise of high-class tones on a truly accessible budget.

I recently bought a squire 60’s thinline semihollow T and upgraded the pups. Really didn’t even need it. I have a somewhat higher end Ibanez semi hollow that is nice as well. Sounds like you want to start with single coils and a semi hollow - maybe even PRS. Setup is critical with these guitars. Also, you have to play it. I once had two of the same guitar delivered by mistake. One was awesome and one had neck, pickup, setup, and other problems…

Semi and 'buckers surely a better way to go IMHO.

I also went from a Pacifica to a Semi-Hollow (Epiphone Dot) which I love to play. The D’Angelico’s look really good as well. Probably obvious but if you haven’t tried one and can get to a music store that has stock you can try then maybe try and play one and see how you get on…

Not much help other than a +1 for semi-hollow!

ES335 types or their clones would be good for both blues and jazz.

Is there an actual reason for this or is it just because the birth of electrification coincided with a growth in Jazz and blues and this happened with electrified semi hollows which then evolved into solid bodies as amplification and feedback became issues?

And I have just spent 40 minutes with the Tele meister Albert Collins and I don’t own a tele !! Ooh dear I feel the Gas arising.

Most of the sound from electric is the pickups.

But theres a feel and groove to a guitar, fretboad , fret size, curves etc that could all help I guess.

Is there an actual reason for this

I have no idea, but I have the opinion that a huge amount of the “specific guitar fits specific style of music” prevailing wisdom is largely based around the aesthetics of the guitar, rather than how it sounds or plays.

After all, I’m sure you could play jazz perfectly well on a Gibson flying V, but it’s probably not the done thing to turn up to a solo fingerstyle jazz gig at a posh restaurant with one.

Besides which who can play Jazz chords on a Schecter 8 -String ??

Ah, yes, well there are exceptions.

I was actually thinking that fingerstyle on a low-action Ibanez set up for legato shredding could be tricky. And there’s some differences with fretboard radius, neck profile, and nut width which can make a difference with some styles of playing. Also, playing a semi-hollow for a high-gain metal gig probably isn’t going to work out well.

But as a general principle, I stand behind my opinion that, more often than not, the choice of guitar for a genre is based on convention and the “look” than anything else.

I will add to this that there are some audible differences with semi-hollow’s that could be more aligned with some genres, like jazz. I hesitate to label these as “tone” as they’re more to do with the sustain.

Semi-hollow’s generally have less sustain than a solid-body. That’s because of Physics: the resonance in the body chambers sucks energy from the strings.

It should be noted that resonance is often thought of as an additive and, therefore a positive thing. It’s actually largely a subtractive thing which reduces the energy of the string vibration.

I say “largely”, because it’s not quite a simple as that with electric guitars, because they are amplified and the amplification can cause transfer of energy from the amplified sound to the body of the guitar. Of course, that only happens with an amp in the room, and won’t happen with headphones or “silent stages”.

But, in general, because of the subtractive effect of the additional resonance in the guitar body, semi-hollow guitars have less sustain than solid body guitars.

I don’t know fur sure, but this might be a desirable feature in some genres, such as Jazz.

For sustain this might be worth a watch , sustain is more to do with finger accuracy, pressure and single points of contact ( mebe fret size helps here?) I think the resonant mass test he did is most relevant to this discussion.

As I said, resonance is normally a subtractive thing, at least when electric guitars are concerned, where the amplified sound is derived entirely from the vibration of the strings over the pickups.

I note he dismisses some of the changes as “they only make a few dB difference”, but dB is a logarithmic scale and only a 3dB difference in signal level represents a doubling of power.