Would like to rave about my DR-01S "Rhythm Partner"

I’ve owned this unit for something like 4 years now. 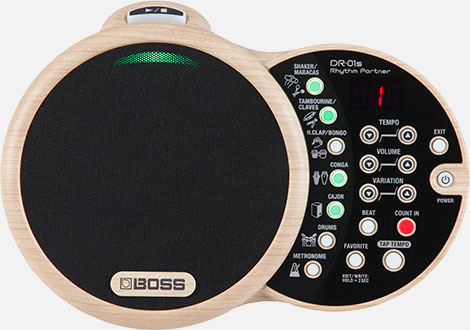 I’ve been playing guitar for over 10 years and my temp seems to always go at the same speed, what I call tony tempo.

When I first tried using a metronome I found it really really difficult and so I gave up. It took a while longer before I was finally able to use a metronome. In the earlier attempts concentrating on the metronome just sucked all the joy out of playing. Thankfully now, it’s the opposite.

A friend suggested the DR-01S to me and I far prefer it over the various metronome apps (including Justin’s time trainer which I quite like).

You have the choice of including various instruments / effects. Normally I quite like the drum kit. It has a basic beat and back beat built in to the drum kit sound. There are also many variations you can choose. The drum kit works for me in that it brings me back to an earlier open mic where they had a full backing band available and unbeknownst to me a drummer got up part way through my second song and just kicked in with his playing. I’d not played to / with a drummer at that stage so the back beat mentally threw me.

Part of what I like about the boss unit is it’s a much warmer / more organic sound than a metronome.

unbeknownst to me a drummer got up part way through my second song and just kicked in with his playing.

Wow Tony what a blast.

Part of what I like about the boss unit is it’s a much warmer / more organic sound than a metronome.

I’ve just started using my Boss DB 90 metronome today instead of the apps. Its so much better with the drums beats and you can plug your electric guitar into it and listen to it and get visual indication if your timing is out.

It was at a pub in Murbah