I would have posted them but my tablet won’t
post pictures just links.

Just flipped that first one, I’d gone lefty for a moment !!

You finally found your right mind?

One ergonomic method I have tried for holding the guitar is to take that pesky F with the first fret barre and set my fingers then move the guitar until my hand is in the easiest position with a good straight worth and the least torsion of my body.

For me that looks similar to Toby. Then I maneuver to find the closest position to that I can reasonably hold. I prefer sitting, so I will probably end up with a neo-classical position, like in the you tube video Mari posted in another thread. Wow, guys, didn’t expect such a fast response. Thanks for helping out. Especially the pictures. Really appreciated.

Be very careful when bending your wrist, improper technique can lead to tendinitis (been there) or even carpal tunnel syndrome.

You can get pretty much instant relief by massaging your forearm since thats actually where the pain originates. I posted a video on how to do this on the old forum, going to go look for the link and post it here in a bit. 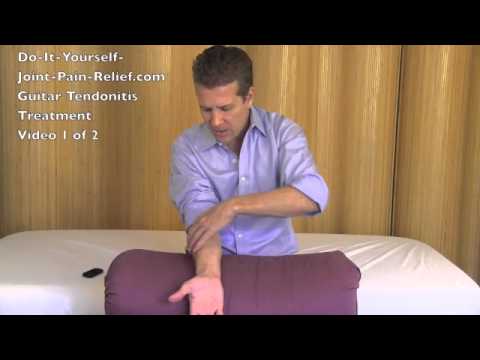 This helped a ton, thanks.

@brianlarsen …of the medical kind?

You better believe it, brother- for 8 years before I hung up my stethoscope
Long forgotten what the hip bone is attached to…

Wow, I’m both impressed and terrified at the same time!

Just kidding around Dr. Brian, you better know there’s nothing but respect and appreciation here.

You better believe it, brother- for 8 years before I hung up my stethoscope
Long forgotten what the hip bone is attached to…

I am a neurologist. Can’t help you with the hip bone thing…
I am impressed you hung it up! That is a lot of training to abandon. I would love to do that myself and just play guitar, but I can’t count on the same income.

Just for you Brian. 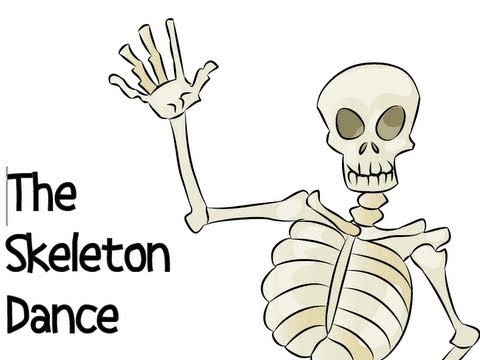 Ok, I get it. Ear training exercise, right?

So what timing is that in?

I guess I’m having similar issues. And I’m not really sure how lifting the neck of the guitar higher is helping that much

First of all, I’m playing an acoustic guitar, sitting down, resting the guitar on my right leg which I have crossed over my left leg. If I raise the neck considerably higher, the guitar becomes really unstable on my leg and it feels like almost slipping down. That feels really uncomfortable.

And if I look at all the pictures, it seems I can see two different things:

Either the player’s thumb is not on the back of the neck, but above/around it. Then the wrist is relatively straight. Examples: 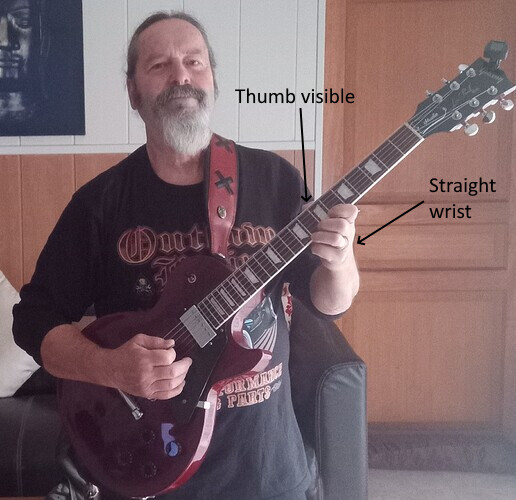 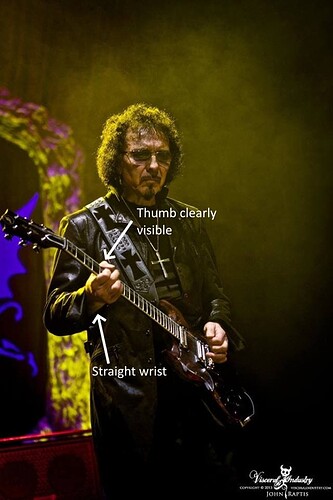 With this thumb position I can get my wrist straight without problems, regardless of the angle of the neck.

Or the thumb is behind the neck, but then the wrist is still bent. Examples: 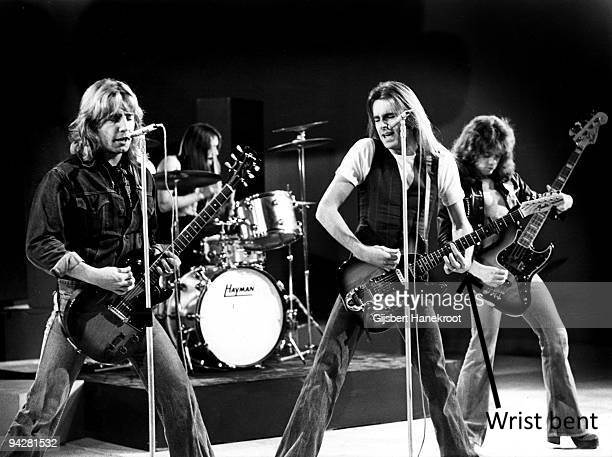 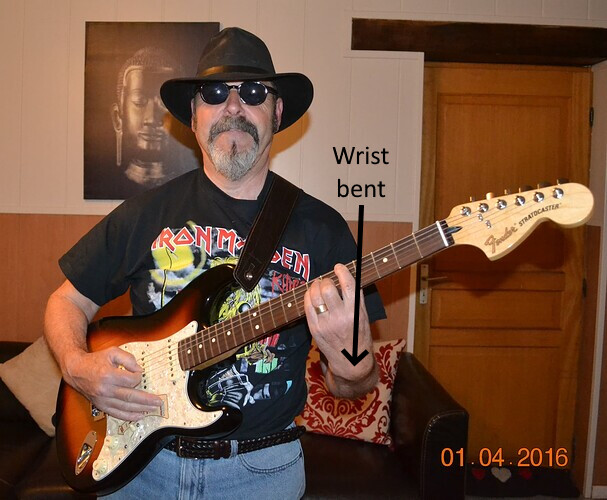 So is this really related to the angle of the neck?

As far as I understood, the correct position for my thumb is behind the neck. But then my wrist is always bent. And yes, it hurts after practicing for some time. The pain goes away quickly, so it’s not that bad (for now!?).

Or is there another way, so that you can have the thumb behind the neck and the wrist (relatively) straight? To me this seems anatomically impossible, not least because of the length of my thumb. At least it does not really change with the angle of the neck.

Any tips? Thanks a lot!

The best position for a Beginner is having your thumb behind the neck to strengthen it so you can play barre chords later on. Justin even mentions this in his early lessons.

Watch both these videos and what where their thumbs are. on the open chords the thumb is above the neck by Zakk can clearly play barre chord because of the strength in his thumb.
In Both videos both Zakk and the other guy have straight wrists

Or is there another way, so that you can have the thumb behind the neck and the wrist (relatively) straight? To me this seems anatomically impossible, not least because of the length of my thumb.

Thanks for linking to the videos! Looks to me, though, as if his wrist is really straight only when he plays open chords. And then his thumb is way above/around the neck. When he plays barré chords, his wrist is still a bit bent (and I would really like to see where his thumb is then). So isn‘t this what I mentioned before already? Though I have to admit that my wrist is probably much more bent than his, and I’m not even playing barré chords

And regarding strengthening the thumb: my thumb usually sits quite loosely on the neck, sometimes it even lifts off, or only the tip of the thumb touches the neck. Not sure how this would strengthen the thumb. So perhaps this is also part of my problem!?

Pain is a warning that something is wrong with your technique. I gave myself tennis elbow for a year because of over practicing barre chords. For me, the treatment was Trigger Point Therapy.

Anyone suffer from tennis/guitar elbow?

Had tennis elbow in both arms a few years ago. Wasn’t playing tennis, but was trying to play guitar at the time - barre chords, specifically. Never saw a doctor, but did online research, and tried all the methods already mentioned above. None of them worked long term for me. If I started playing again, my fretting hand elbow would start hurting again - often, the same day. What did work was this book. Basically, it’s self treatment by deep tissue massage with a hard rubber ball. I notic…

Lots of other treatment tips in that topic.

if you have a tendinitis, go and see a doctor, and slow down until fixed.