You can't hide the number of subscribers in youtube what a shame!

Recently youtube does not allow you to hide the number of your subscribers
Am I the only person that is concerned? probably not .It does not look nice
I have a long way to go

i just checked my channel. I have a whole massive amazing 26 subscribers. It’s the first time I’ve ever checked the number.

If you’re not careful, you’ll become the joker of the community, Tom (only joking!

I imagine most people who have ‘followers’ on social media platforms (beyond family and friends), might know about 100 of them, might have an idea where they know another 100 or so from, and from between 2-300 onwards, haven’t a clue who the rest are.
I am curious as to why you would like to have more followers?
Unless you are actively trying to recruit more, you have an awful lot already

Who has the most music-related followers? (YouTube/Soundcloud/Spotify etc.)

Tom has set the bar with an impressive 342

I really don’t understand the obsession with numbers. Who cares how many are subscribed, unless you’re one of these people trying to gain sponsors and an income for your channel? What else does it achieve? You have “a long way to go”… to what exactly?

If visitors choose whether or not to watch you videos based on an arbitrary number, then they’re probably not worth having as subscribers anyway.

Never thought of looking to be honest. Seems I have 31 but don’t even know how to find out who they. Assume most are from here or the old gaff but to me YT is just a vehicle to share and inflict recordings on this community. At least on YT I don’t get spammed by get rich quick “promoters” like you do on Soundcloud. Anyway I am too old for stardom.

Where are you going and what is the objective ? Are you seeking monetisation and tying in the thread on becoming richer ? Just curious.

if It can get me some extra earnings that at least I could use it for my own hobby. It could be great
then I could concentrate on writing new songs and play more music and feel less guilty that I am spending more time on music than making money

You will need a LOT more subscribers than that.

You’ll need 1,000 subs to even start monetisation on YouTube (plus a load of watched content). And even then, you’ll be earning pennies.

And if you use any copyright content, you can’t monetise that.

There’s some musicians who have a decent following on YouTube and make a bit of money from it, but it’s taken them years of effort to do so, with as much time (possibly more time) dedicated to building their channel as to making music.

Unless you are committed and dedicated to building a social media presence over a few years, I would forget making any significant money from YouTube.

And don’t forget that Google/Alphabet can de platform you at any time. There goes your hard work.

So … dreams are broken here… but it is the truth Tom…

YouTube is very competitive, it takes a lot of time to grow and maintain a channel and subscriber base. If you are determined and committed you can give it a go, try some live streaming or publish song tutorials, observe the content of other musicians and try something similar or find your own niche.

As the old saying goes, “Don’t let someone else’s opinion of you become your reality.”

Yikes! You have more than me. Oh the horror!!!

YouTube is very competitive, it takes a lot of time to grow and maintain a channel and subscriber base

Exactly. I don’t want to say Tom should not do this, but he should be aware of what he is getting into: it’s a long, hard slog to build a successful YouTube channel with decent monetisation.

And a lot of that slog is going to be planning, scripting, reshooting, editing and marketing. It’s not going to be “making music”.

And, to keep up with current YouTube standards, there’s a significant investment in camera equipment and lighting needed.

Given other content creators I know who are trying to build YouTube channels, I would estimate that, to be successful, you probably.will be committing at least 60% of your time (and probably more) to activities that aren’t directly about music.

If that’s what he wants to do, then he should go for it.

But I have an inkling it’s not

I’m in awe of the youtube numbers that some of you folks are getting. Being liked, followed, etc is kind of cool. Nobody with a channel wants to be flat out ignored. I say go for it and build your channel and following. Keep an eye on the numbers but don’t let them influence your creativity.

Given other content creators I know who are trying to build YouTube channels, I would estimate that, to be successful, you probably.will be committing at least 60% of your time (and probably more) to activities that aren’t directly about music.

Absolutely true, it is a full time job with no guarantee of success. That’s why I’m not paying much attention to my channel, I record something, do the editing and let it be there for the progression sake. I do not even dare to think I could do it full time (Steve T., over 3 mln subscribers, he say all he does these days is editing).

Something that requires less preparation is Twitch streaming but involves moderation, some investment in lights and camera/cameras and experimenting with the content. Again, it can take months before there will be any money and if so, probably very little.

I think in both cases “go all the way” is the only chance to achieve some sort of success.

Can’t beat Tom, but here are my Soundcloud stats

(they already start punking me about buying more time!) 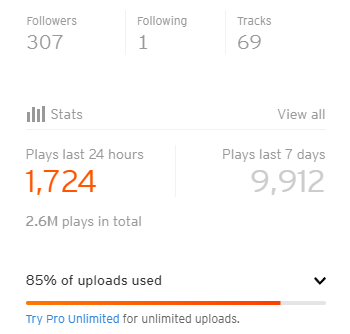 I can dedicate my channel to how not to play guitar…

But, at the same time, there’s no harm in putting yourself out there. Just don’t expect it to become anything.

And then, if it does, it’s a pleasant surprise,. like winning the lottery.

Unless you are committed and dedicated to building a social media presence over a few years, I would forget making any significant money from YouTube.

. I am not in a hurry and I am not putting this as my goal in life , Just said I welcome that idea I know it is hard. Will just go ahead and enjoy my hobby

the rest let it be …

Very correct and scary not for me but for many others who have spent their whole life on it. Actually I have a friend who is earning approx 5000 US Dollars monthly and he is always worried some thing might go wrong .