A Capo For Two: Jamming for Beginners

Thanks Rogier!
Yeah. She still pluckin away on it… myself not so much… still not really figured out electric. But some day

Been away for a while so i have missed my acoustics.
I am totally hooked on getting the «when your down and out» song with Clapton… Eric inspired me on the last open mic…
but i am pretty sure i will get the hang of electric some day. But i dont bother to stress it…

Not that you’re away much, guitar goes for work and stuff…or…well

I’m also working on that down and out song, it seems contagious … a bit difficult on electrical because of the space of course … you should also try this on electrical …

Justin provides this cheat sheet, but it’s only major chords. 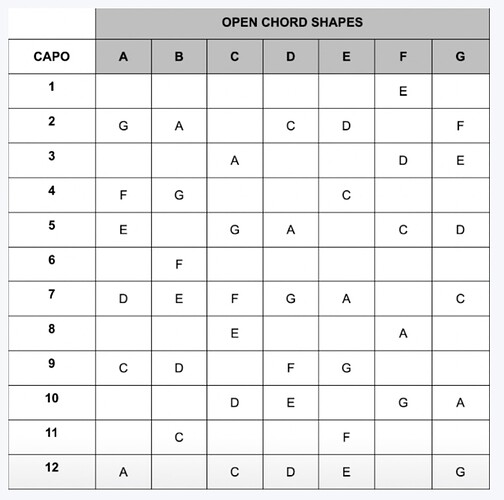 Only two songs in my repertoire - Bad Moon Rising and Royals - work with this chart. The others I want to play have minor chords.

I just spent about 10 minutes searching, and found only a few that even listed minor chords, and I am not even sure they are intended for this purpose.

Can anyone point me to a similar cheat sheet? Or does this technique only work for major chords?

There was a capo chart in the old classic course based on the open chords: A, C, D, E, G, Am, Dm, Em and Fmaj7 for capo frets 1 to 10. Again it gave a few populated and left for you to complete. I’ve not got to populating it yet. Interestingly, with the capo chart on the new course I’d have considered F and B chords as barre chords rather than open chords.

The others I want to play have minor chords.

Just substitute the major shape with the minor shape.

The chart works with either Major or Minor chords. For example:

I use this when I play Heart of Gold with 2 guitars. Sounds great!

Justin, I love your course, and I’m going through the beginners’ grade for the second time to see what’s changed. To tell you the truth, I found this lesson too complicated and somewhat misleading. It’s much easier for me to think of the capos in terms of transposed notes (capo on the 3rd fret = everything + 3 semitones). I think there’s a lot of information here that will hardly be used when beginners will no longer be so. That’s my humble opinion, of course. Thumbs up for all the rest, and all the restyling.

Just substitute the major shape with the minor shape.

The chart works with either Major or Minor chords

Indeed it does! I don’t know why I thought it was more complicated than that.

To tell you the truth, I found this lesson too complicated

I found it best to print out the capo sheet, and mark the capo equivalent chords on my lead sheets for the songs I want to play with someone else.

I think some of the confusion stems from the terminology some people are using in this thread. For example “So if you put the capo on the second fret and play an A chord the chord you are playing is a G.”

It would be a lot less confusing if it said “So if you put the capo on the second fret and play a G chord shape the chord you are actually playing is an A.”

Yeah, that threw me too. IIRC, I got it backwards the first time I tried it.

But what I found most confusing was all the talk - at the beginning of the lesson - about how to figure out the alternate capoed chord shapes.

No doubt that is useful to know, but if you just want to try out the technique, it’s much easier to just use the table.

Yes, the table would be clearer if you swapped the top two grey rows around so that chord in grey are at top of table.

The real life examples at the very bottom of the Learn More section mentions Handle Me with Care by Tom Petty. That should of course be Handle with Care by The Traveling Wilburys - although a cover version would’ve been great.

I’m excited to try this at my next Irish trad session… Like many other commenters, the logic explaining how it worked wasn’t entirely clear to me from watching the video, but it was fun figuring things out…

The chord grips you play are the same ones you’d use to play the song in a different key. The capo is shifting the notes produced by your “new key” chord grips, so the sounds produced matches the original key.

To get these new key of D Major chord grips to produce the notes of your song (originally in G Major,) you need the capo to shift everything up by a perfect 4th.

This trick works for every type of chord there is - major, minor, sus, etc.