It is not difficult to compare the sound of two acoustic or classical guitars for me and I can say this one is good or that one is not that good because everything sound is produced by the guitar itself but for electric guitar, I only have Yamaha Revstar standard and am new
I have not tried any other electric guitar for example expensive USA fender etc

So do they really sound very different? If are connected to the same amps and effects? in What ways?

Does any body have Yamaha Revstar to compare it with an expensive fender or what so ever and tell me what is the difference?

Aha, the search for the holy grail!
Believe me that once you’ve got a half decent guitar the rest is up to you, if it doesn’t sound good it’s not the guitar! The only real exceptions are either where the guitar is too big for you or it’s too heavy for you.
I played this on a £120 (sub €180) Harley Benton guitar over a backing track off YouTube, I also used a sub £300 (€350) Amp. Plug in baby complete.mp3 - Google Drive

There are several factors influencing the sound of an electric guitar. Or are there? So do they really sound very different? If are connected to the same amps and effects? in What ways?

Yes, they can sound very different.

Does any body have Yamaha Revstar to compare it with an expensive fender or what so ever and tell me what is the difference?

It’s not really about the cost of the guitar. Expensive guitars are made from better materials, tend to look nicer, feel better and, generally play better. But do they sound better?

If you use the same amp, effects and guitar player then the vast majority of tonal differences on electric guitars comes down to the pickups. If you understand how the physics of guitars works, then you should understand that probably more than 90% of the guitar tone comes from the pickups and associated electronics.

And it’s a fact that different pickups sound different (not necessarily “better” as that is a subjective judgement). For a start you have different types (single coil, humbuckers, P90s, etc.) which have very different sounds. Then, even within a specific type, two single coil pickups (for example) can sound different due to how they are made: different magnet types, number of windings, etc.

And, again, I would kind of dispute this is about cost because the difference in component costs between a cheap pickup and an expensive pickup are not vast.

Although, in practice, it can be about cost because of marketing: you generally don’t set your price based on your costs, but on what the market is willing to pay. Brand name, well regarded pickups will command a higher price which doesn’t directly reflect the cost of manufacture.

But there’s nothing stopping a manufacturer, like Yamaha, making decent pickups and putting them in lower-priced guitars.

So, let me fix your question for you:

Does any body have Yamaha Revstar to compare it with a n expensive fender or what so ever and tell me what is the difference?

Yes, I have a number of guitars including a decent Fender Tele, a decent G&L Tribute (basically a more modern version of the Strat, designed and manufactured by Leo Fender under a different brand name) and a PRS S2 Singlecut. I also have a Gibson SG with P90s.

All of these sound different because they have different pickups and pickup wiring/electronics in them. The humbuckers in my PRS sound fat and round, but can sometimes get a bit muddy. The single coils in my Tele sound bright and “twangy”, whilst the single coils in my G&L and my Travelcaster sound bright and less “twangy”, although with some adjustment of the controls I can make my single-coils sound similar to each other.

The P90s in my Gibson are bright but have a bit of a “growl” to them. That might just be because they are higher output and drive the amp more. They also feel a bit fatter than the single-coils. The P90s in my Revstar sound a little similar although, I would say, less aggressive. On the Revstar I also have the out-of-phase settings (positions 2 and 4) which the SG doesn’t have, as well as the “boost switch”, which gives tonal variation.

A couple of years ago, I also had a dirt-cheap no-name brand “Swing S100” Strat copy. That sounded great.

It’s mostly pickups right. Different guitar materials also seem to affect sustain. I watched some video a while ago where they put guitar strings and a pickup on a steel building beam and it had mega sustain.

there’s nothing stopping a manufacturer, like Yamaha, making decent pickups and putting them in lower-priced guitars.

Sustain is absolutely affected by the materials and construction of the guitar.

The Physics of this is that any resonance in the guitar body will steal energy from the strings vibrating. So the more the body resonates, the lower the sustain.

Hollow and semi-hollow guitars are examples where the body is designed to resonate and these guitars are also known for having less sustain.

However, this is not the end of the story because, when you play the guitar amplified (assuming you aren’t wearing headphones) the sound from the amplifier will cause resonance in the body too, as well as the strings. This will, ultimately, lead to feedback.

Notably, hollow and semi-hollow guitars are more susceptible to feedback.

Going back to the steel beam test, that’s an example of a very rigid material where almost no resonance was occurring in the beam and thus the vibrational energy in the strings was maintained.

By the way, for context, I doubt that the raw materials for just about any pickup ever made cost more than around 30 USD, and most will be considerably less.

For a 2 pickup guitar, I would estimate the cost of materials for the pickups to typically be from under $10 for a very cheap guitar to around $30-40 for a guitar in the higher price ranges.

Obviously there’s assembly costs here too, but in bulk they are likely to be a few dollars at most.

Thanks for asking @iguitaryou that’s a question I’m interested in too. As a beginner I postponed the purchase of a “good” electric guitar, because I’m not sure how I should compare different guitars when my playing isn’t good enough to work differences out…
Thanks to folks like @Majik I pick up a lot of technical information from different posts, that helps too. Thanks for sharing your knowledge with us @Majik

So do they really sound very different?

Find a quiet room and play an electric guitar without plugging in. That’s what the guitar sounds like (wood, stings, construction). Once you move past the aesthetics, ergonomics and player ability, the sound overwhelmingly comes from the pickups (input) and amplifier (output).
In this equation the pickups, while important, are essentially just a couple of magnets, wrapped in copper wire, making up only a fraction of the guitar cost. (There are the vol/tone controls and pickup switches too, of course)
The amplifier on the other hand contributes most of the sound quality that we hear. (I’m including added fx like pedals and speakers on this side of the equation). This is where your dollar actually pays for your sound.
I started a thread about this here and, unsurprisingly, most folk emphasized the differences between the sound of the various guitars (or maybe more accurately pickups). My point was that, purely from a tone perspective, the amp/fx plays the most important role.

(Note: A couple of days after declaring I’d never need another electric guitar, I bought a cool new one which I love! I’d better brace myself for another bout of GAS then, eh @DarrellW?

I’d better brace myself for another bout of GAS then, eh

Hi Brian, (and anyone else who thinks they don’t want/have to buy a guitar anymore)
I don’t mean to be annoying, but I’ve heard recently that if you buy a guitar in a different color it sounds better at the beginning than the last one you bought…and even the day you buy a guitar makes a difference your sound and your playing pleasure…maybe this isn’t quite true…but do you dare to risk missing out on an even better sound/playability??? well wellllll
Greetings,

I hear you, brother.
Take a look at how my much-loved Daphne blue has faded to a jaded grey in half a year

Something must be done! 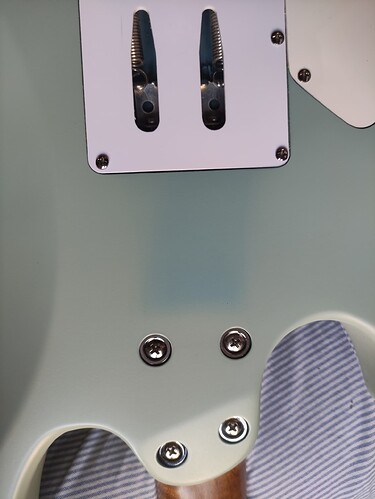 …
that’s crazy fast,You didn’t take her to the beach did you???

I’m tempted to enquire what the new zipper sounds like, but we should try and get this thread back on track… Apologies, Tom

) and rope line(?) at the front…and back to you Tom

I heard it said in an alley at the guitar shop…psst psst,…