How much time do you spend practicing your amp?

I recently bought a wireless footswitch pedal for my Yamaha THR10ii desktop amp and after getting it all to work together, finally ventured beyond the painfully simple ‘twiddle the knobs on top’ to get different sounds.

That involved downloading the app, which includes a ton of presets and additional options.

Now I’m kind of blown away by all the different sounds that come out of this tiny machine, with or without headphones. It appears the choice is limitless (even does a decent job of producing acoustic tones)

It’s worse than that- I’m wondering if I will ever need another guitar!

Apart from the feel of the neck, staying in tune (ok, and looks for some), does it really make that much difference what axe we wield, with all the post-plucking wizardry available?

There are significant differences in tone/sound from different electric guitars. Whether a guitar has single coil or humbucker style pickups makes a big difference. If you compare a strat, tele and LP style guitar into the same preset you would hear quite a lot of differences.

I’d have to agree with Jason regarding tone in respect of pick ups etc. As to “practicing the amp” if I am just goofing off a technique and just trying to get it into my fingers and head, I’ll play a few bars and kick in another FX on the Mustang, so I could loop around all 100 FX in an evening. Its a good way to find out what sound suite different techniques and sometimes just a blast. Or just a change from humdrum practice.

FWIW when Fender shutdown the support for Fuse and the website I managed to get a copy of the FX archive, which is now available at In The Blue. There is a zip file with just under 10k FX.

Nope, it’s not a cure for GAS unfortunately there are pretty noticeable differences between differently constructed guitars, even the wood used in their construction makes differences.
Mind you it can slow things up a bit while you’re learning to use it and find a good proportion of what it can do

No way Jose, it’s not that easy! I enjoyed this video and shows differences pretty well on different settings as not that long ago I had the same thoughts as you have now. Of course you’re right @Rossco01 & @TheMadman_tobyjenner
But that’s if you compare using the same settings.
Surely, in the right hands, it’s possible to approximate the sounds that most pickups contribute, (considering the plethora of modelling amp settings that are available).
I’m guessing most guitarists would struggle to identify what guitar was being played on a particular track, if they didn’t have previous knowledge about the artist or preferred axe for a particular sound/image.

Regarding ‘dropping in the fx at the kick of a switch. Toby… Well, that’s precisely why I bought my wireless foot controller. I can’t imagine ever requiring more than 5 different tones in the one song.

I think this is the crucial point!
Time spent fiddling with sound = Time not spent practicing guitar
It is fun though and does make a big difference to the way your song is heard.
It would also be prohibitively expensive to buy another guitar for each different tone you are looking for (although I believe there is a school of such beliefs

)
My initial question was probably more a reminder for us newbies to explore the options we already have in our arsenal before adding more E’s & Whizz.
I know I had neglected this whole area and am buzzin’ now

@adi_mrok Have to run, but I’ll check that vid later… cheers

I do agree that pick-ups and guitar construction will make a difference to the sound, as well as the pedals, amps, and cabinets. So GAS for additional instruments and gear is not going away.

That said, have a look at this video Joe Bonamassa on tone – and how to sound like Clapton, Page and Beck

First and foremost tone is in the fingers. And based on the video, quite a lot of ground can be covered with a single instrument and amp.

At this stage, my view is that I don’t play nearly well enough to warrant an additional electric guitar for creative reasons. I reckon I can produce more than enough sounds from my Epi LP with ability to coil-split the humbuckers. Maybe I could produce better music with a better quality guitar but doubt if buying an Epi SG, or similar quality strat or tele style guitar would make a big difference.

Regarding ‘dropping in the fx at the kick of a switch. Toby… Well, that’s precisely why I bought my wireless foot controller. I can’t imagine ever requiring more than 5 different tones in the one song.

Oh I can do all that from the Mustang’s 6 way foot switch and Exp pedal, its auto loading them in the amp from the PC at the kick of a button I am after.

So @brianlarsen you are sort of right that you can approximate them using FX and actually if I’m being ABSOLUTELY honest that is what I have to do when we play as band…I really don’t have the time given what we play to switch between different guitars for different songs. For a lot of rock songs though it would not be possible for me to get the tone I want out of Single Coil guitar it would need humbuckers (single coil just isnt “fat” enough lol). So my current guitar - PRS SE Custom - fortunately has a split coil option for the humbuckers…which means I can sort of emulate single coils where I need them. It works okay but at home it sounds nicer if I switch between guitars. I find it quite tricky to get a tele sound on it though.

I am also fortunate that I use Multifx so do have the use of multiple amps that also enable me to get the tone that is acceptable to my ears for each and every song if I so wish.

@adi_mrok I enjoyed that vid- a good comparison of the different tones from 3 iconic guitars.
But my main question was how much time is worth spending learning how to manipulate the sounds of one guitar? How close to an LP can you make a tele sound?

@DavidP I started watching it and it’s interesting

All guns on the table Brian - I took a blind test on youtube to see if I can recognize what type of guitar is being played and I would say less than 50% I was correct. I guess it all depends on a person and how well one can distinguish different sounds from each other. I think you can get fairly close to what you want to achieve so a tele sound on a strat but it won’t ever be exact match.

Had time to watch the comparison video. I’m listening through my mid-fi earbuds which will have some effect.

What was most interesting to me was that in the first and third tests which sounded pretty clean the LP sounded significantly different, with much less difference depending on the pickup position between strat and tele.

But the second test, which I guess added more fx to shape the tone in addition to the guitar, there seemed much less difference.

And I’ll fly my colours on the mast … based on first and third tests, my preference is for the LP followed by tele. But maybe I am preconditioned, since every time I try all three styles through the same amp, I arrive at that conclusion. Not a suprise since the electric I have is an Epi LP.

I tend to agree with your analysis. How much was down to FX or just the fact that other instruments were would have been competing for frequencies but certainly things were closer with less distinction.

As to preference, I think its horses for courses. Sometime I will find an FX that I like then swap between Stats, LPs and HBs and see which one suits better but there is always a subtle difference between single pups and humbuckers. And the Iron Gear Affinity is another matter altogether !

Every time I hear a tele, it sounds special. Yet I usually prefer warmer tones like the LP. The tele neck and strat neck were very similar. They all are good, the strat and tele closer than I thought. My strat has a humbucker at the bridge, I wish it didn’t. I need a tele. Not so interested in the LP, but I have a Carvin with dual humbuckers, which is not the same, but closer.

How much was down to FX

I’d assume … hope … that for a video like this the pedals and amp settings remained the same for each test.

What can’t be discounted is how the different guitars may invite variation in the playing.

After watching the video (thanks for the share Adi) I preferred the LP sound and then I think the tele just pipped it to second place for me.

It was an interesting watch.

But @brianlarsen why not still buy lots of guitars, that will then mean you have even more effects to go with.

10 guitars and 10k FX = hours of bliss. Funny though I probably have a dozen or so go to FX based on the Mustangs amp models, unless there is a specific “band” sound I am after and can’t easily replicate. 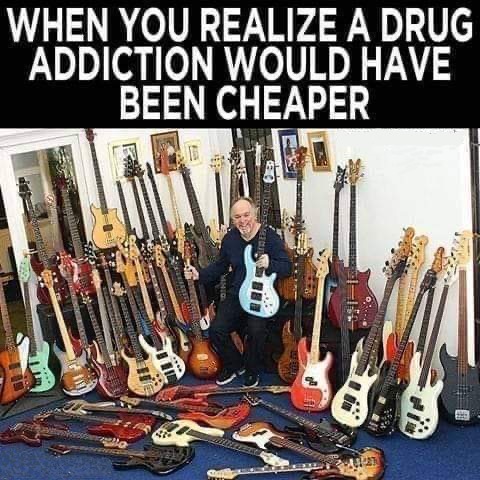 Personally, whilst I believe that different styles of electric guitars do sound significantly different (mainly IMO due to pickups, action, and aspects like scale length) I actually think the biggest difference between guitars is how they feel to the player.

How they “feel” includes aural feedback, so that includes how they sound when played a particular way, and this includes the amp, cabinet and the space in which you are playing.

And to answer the original question: I occasionally spend a fair bit of time exploring my amp, often with different guitars/pickups to see if I can get anything interesting or inspiring from it.