Changing the Nut on my Acoustic Guitar - My experience

Thanks to @TheMadman_tobyjenner for suggesting I take on this project and documenting it.

Thanks to @Jozsef for the helpful video he sent, which can be found in this thread: No Longer a String Change Virgin 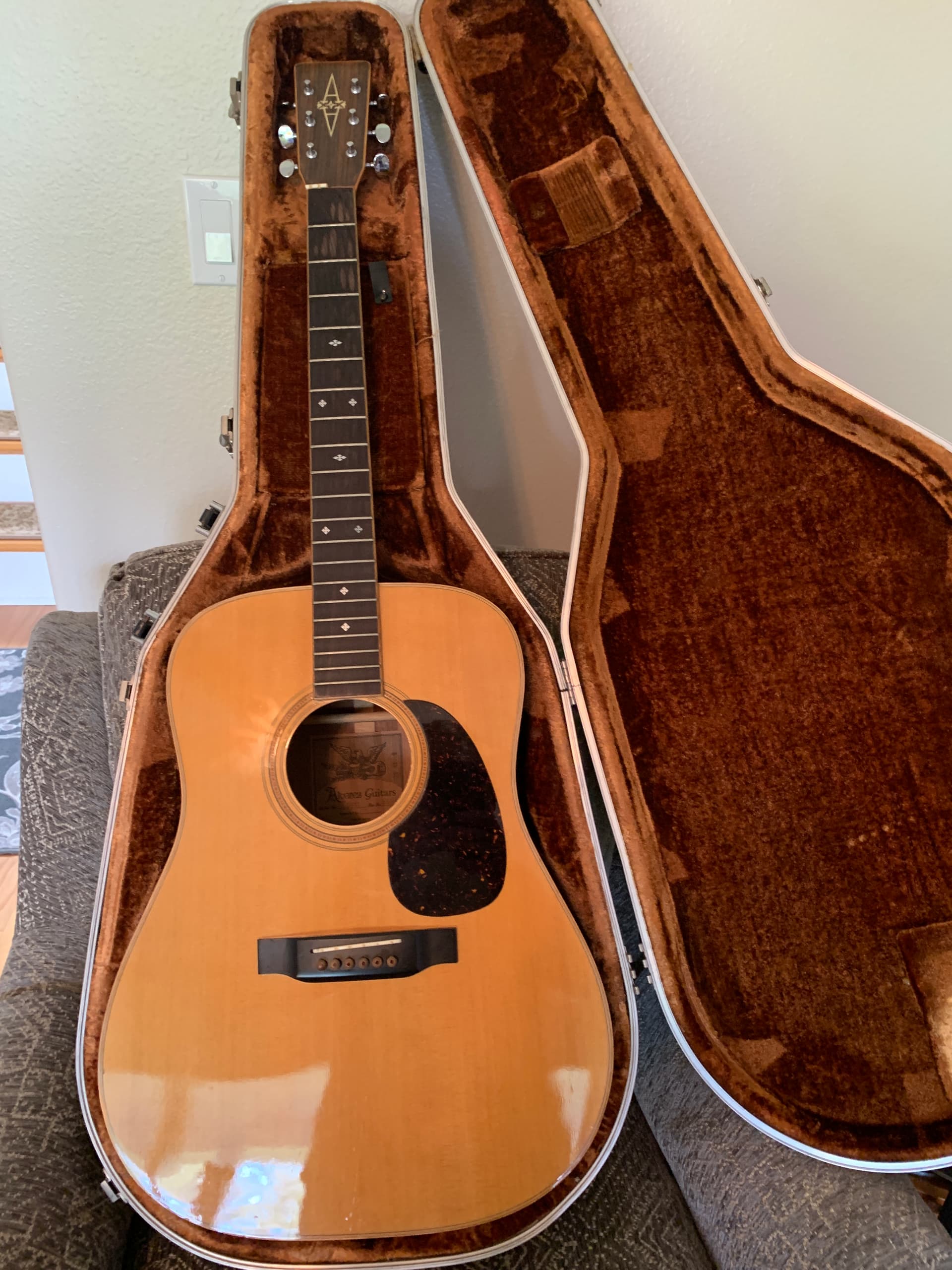 I found a new nut at SamAsh – Graph Tech TUSQ Slotted Gibson Style Guitar Nut US$11.60. The E to E spacing was the same, but the new nut was a bit taller so that had to be fixed. 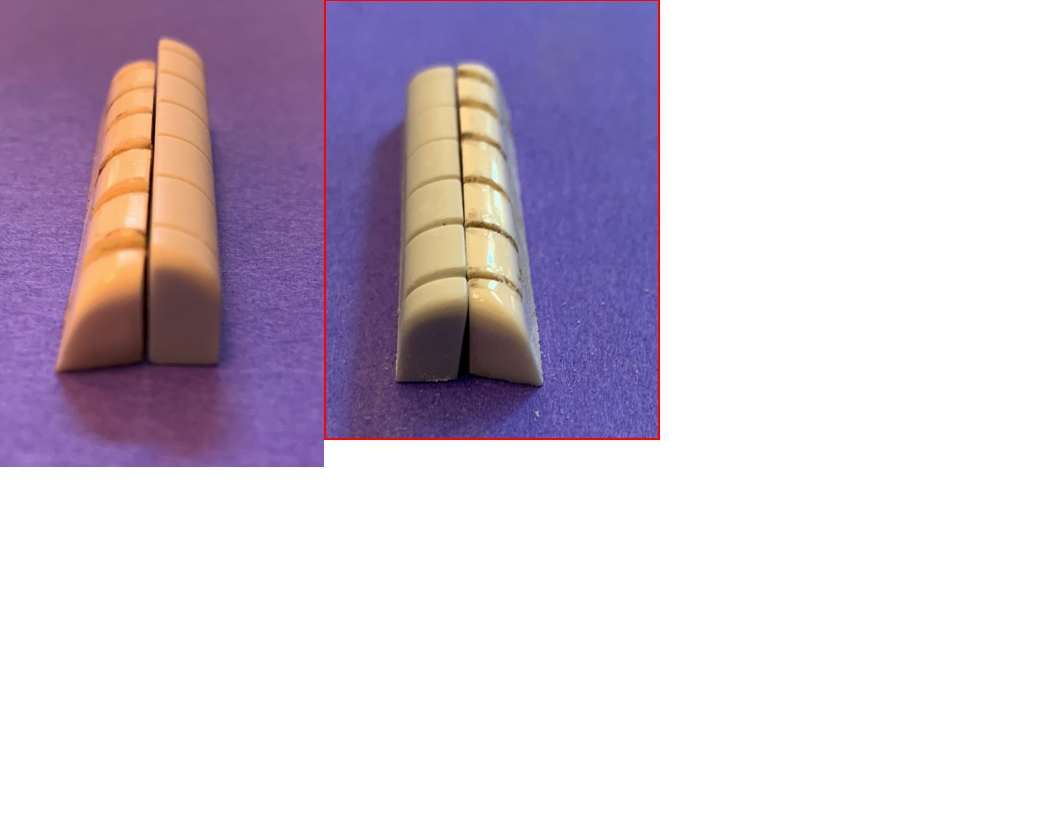 I found this description of the TUSQ material and thought it might improve the sound of the guitar: “TUSQ produces more harmonics in the mid and upper range of the guitars. TUSQ nuts have harmonically rich tone, without the inconsistency found in ivory, bone or other natural materials.”

“TUSQ DELIVERS THE OPTIMUM FREQUENCIES FROM THE STRINGS TO THE GUITAR TOP, PRODUCING RICHER AND FULLER TONE.”

I also found video tutorials which I watched.

Kenny Wayne Sheperd used Graphtech nuts, that’s great, I just saw him in concert with Buddy Guy. The new nut is too tall, so I used 220 grit sandpaper to remove some of the material.

@Burnspot recommended a dot of super glue to hold the nut in place. I had emailed Alvarez support and asked what they use and was told that they too use super glue. My compliments to Alvarez support for the prompt replies.

While the strings were off, I used Lemon Oil to condition the fret board. I had never done this before and I’m sure the previous owner did not. The fretboard absorbed a lot of the oil, and it took several applications for an even finish.

The Graphtech videos recommended cleaning the area for the nut with a flat file, so I used one to remove the old glue from the neck.

I used four drops of superglue on the guitar, where the bottom of the nut would sit and four drops on the face of the nut, the part that adheres to the fretboard. All of references I used suggested putting the E strings on and tightening them just a little to hold the nut in place. I did not do this, since superglue dries quickly; I just held it in place for about thirty seconds.

My replacement strings were D’Addario XS Phosphor Bronze, which are different than the strings that came off. While putting on the B string I poked my thumb on the tip of the high-E and drop some blood on the headstock, so I hurried to tighten it enough so it wouldn’t pop off. As if that wasn’t enough, I poked myself TWO more times. So, be careful when you’re changing your strings. 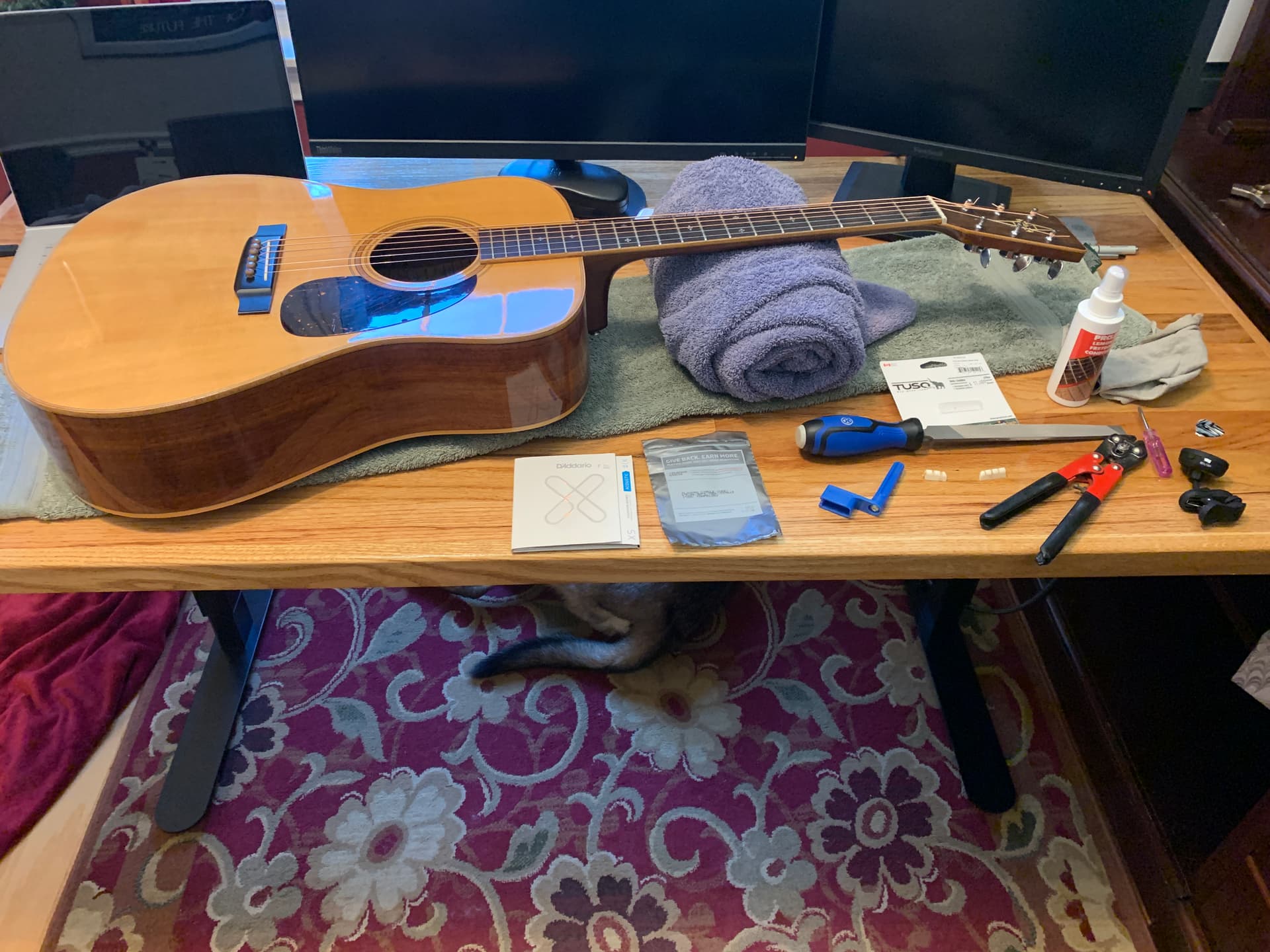 One of the things I like about this guitar is that it had a deep, smooth, mellow sound without too much bass or sounding muddy. With a new nut and different strings, the guitar has a completely different sound, it is much brighter and will take some getting used to. As the Graphtech website says, the new nut produces “more harmonics in the mid and upper range,” which is evident. Thanks to the community for the help and support. Now, time to practice…

Was the nut pre cut for your string gauge or did you have to do any filling ? My luthier had to replace one of my Washburn HBs with bone (a local shop had been over zealous lowering the action!) so he had to cut the grooves from scratch ?

Nice work; glad to help in some small way! When I recently changed out my strings, I managed to not poke myself…spent more time trying to keep the kitty from poking HER eyes out on them.

The nut was pre cut, the low E could have probably used a little larger goove to sit in but it is secure. For my first project I wasn’t really prepared to increase the size for the gauge.

Glad to see the replacement was successful

A little tip for opening up the groove when you’re going up a gauge; keep a short length of the old string, take some 600 - 800 grit emery paper and make a U in it and put the string in the U, use this to carefully open the groove up being careful not to increase the depth unless it’s too high.

The brightness you hear might be a combination of the strings and nut. Certainly when I change strings the guitar will sound a lot brighter until I’ve been playing it for a few days.

Nice write up and thanks for sharing.

Thanks for the tip, I will keep that in mind.

I expected the guitar to sound a bit different. This expectation was set when I watched the videos on the GraphTech site.