No Longer a String Change Virgin

Took a deep breath and dove into replacing the strings on my Pacifica after 3 months of daily use in Justin’s courses. I think it went reasonably well, though at least one of my windings looks bad, lol. I gave each string a few good pulls to settle everything; I’ll see how well it’ll hold tune and pickup another set of strings, just in case.

It was not too bad of a job…nothing to be afraid of at least. I freaked a bit when the nut fell off, but after some reading, found that a glued nut or unglued nut is one of those never-ending debates, so I just held it in place while getting the first strings back in place. 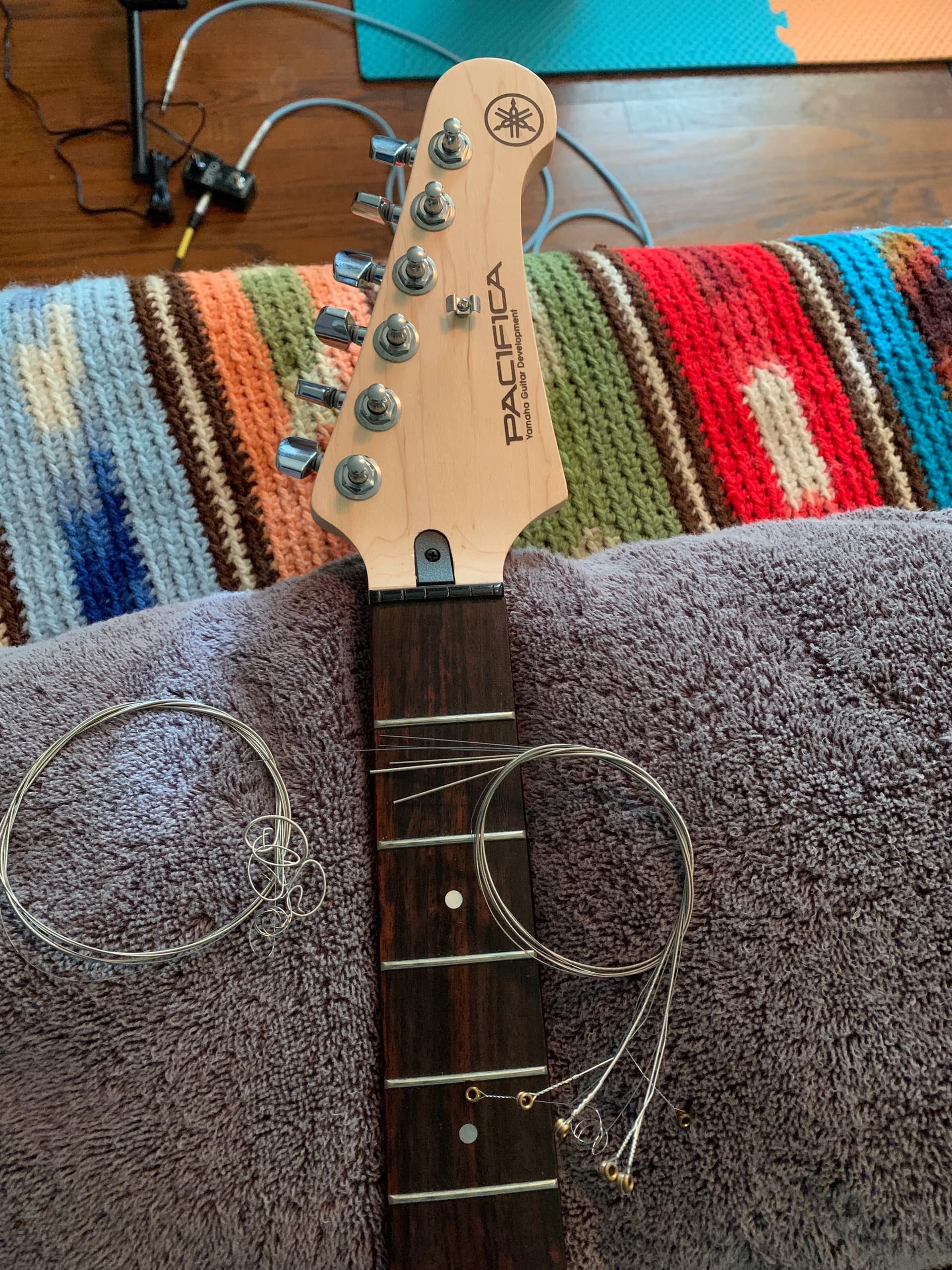 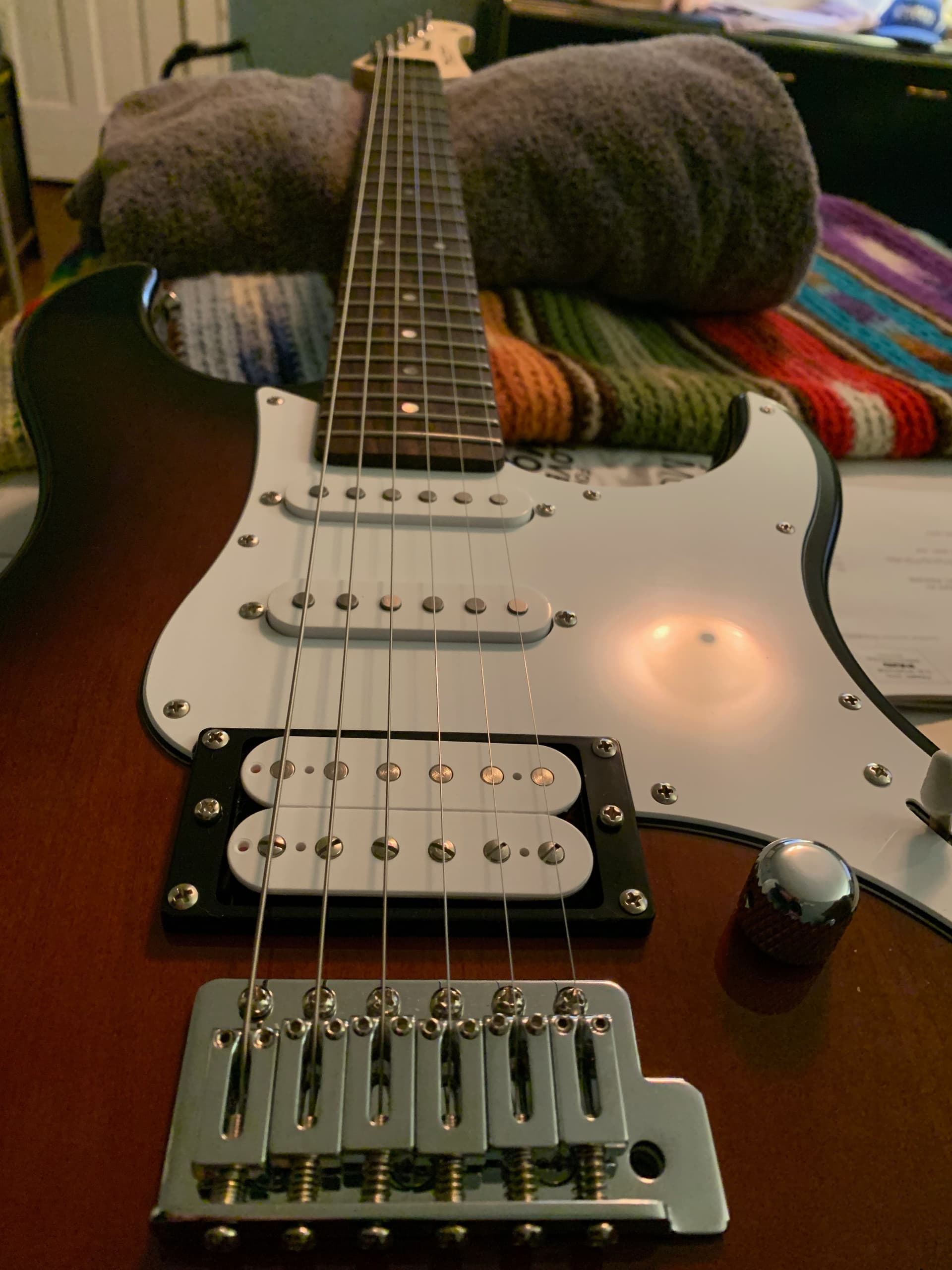 Well done, not as scary as you thought eh?

dont worry about the windings going wrong, I always have at least one dodgy string on my guitar

nothing to be afraid of at least.

I have changed strings for the first time some weeks ago. Had to buy another package as i have accidentally snapped a string. This made me really appreciate the Quik Change tailpiece.

This week I changed strings on all 3 of my guitars and by the time I finished I got so used to the motions that I would have done it all over again. However, the 12 string almost got the better of me because of the tighter spacing between the machine heads.

Yep, no biggie. It sounded great during practice afterwards…

String change horror!!!
I was changing the strings on my 1980 Alvarez Acoustic and the nut broke in half!

Now I get to experience figuring out which nut to buy and gluing it in place.

Hi Mike and welcome, nothing worse than a damage nut. Good luck on the replacement, maybe you could share the experience ?

My first thought was to use Gorilla Glue to glue the piece that broke off back into place. So I assembled everything I needed and sat for a minute thinking about it. The first problem is that gorilla glue expands up to three times it’s size so it usually foams out and that would ruin the guitar.

I then searched the Internet for a replacements and, of course, there are many to choose from, but probably only a couple that are the correct size.

Next, I emailed Alvarez to ask if they could provide the specifications for the correct nut and here is the reply I got back.
“Sorry but we have no record as to the size of the nut for this old model & no direct replacements. Best to have a local luthier help you out.”

Their reply is less than I expected but I’m not surprised, I’m sure the Model 5027 was one of their entry-level models. It was given to me by a friend after he broke his hand and couldn’t play so I don’t have anything invested in it. I’ve got a tip on a local luthier that I’ll call today, he’ll also be able to fix one of the tuners that is loose.

It’s good you’ve found a luthier nearby, they surely can replace/refit that rogue nut on your guitar easily.

There’s a website called StewMac which is a great resource for the luthiery of string instruments. You may find this video of theirs interesting: I would think that a small dot of super glue would probably hold the pieces of the nut together, which is the same thought I had for the nut on my own guitar…I could see the faint outline of a light glue on the nut when it fell out.

I’ve got exactly the same guitar

, which is probably well overdue for a string change,… given its still got the factory strings after about 6-7 months of playing/learning.

Was just wondering what strings did you choose to replace them? I don’t mind the gauge of the factory ones but not sure what that is and not sure where to start in selecting new ones, so many different types/brands.

I replaced mine with D’Addario NYXL 09-42’s, which is what it came with, as far as I know. At this stage, I don’t know any better, but these strings seem nice.

@jamolay I like the way you think! I’ve got my eye on one that’s in a private collection. It hangs on the wall in a glass case and hasn’t been played in years. I’ve asked the owners to let me know when they are ready to sell.