Confusion as to what goes where?

On the basis that I have the following (I don’t have 3 and 4 yet but thinking about it) can someone confirm how they are all connected together. What connects to what?

Adrian, just to check my own understanding …

The amp will connect to the AI provided it has a suitable output? Some amps may plug directly into the PC. And perhaps the better bet is Amp - Mic - AI - PC?

I’m a complete novice when it comes to recording, but fwiw my recording chain is guitar → audio interface → mac (Garageband)

Any amp models/effects I want, I get from Garageband. I assume other DAWs have similar capability.

I found that doing aux in from amp into scarlett tends to get better output to DAW comparing to my usb connection. Of course your way is also correct however since OP asked about scarlett I thought perhaps this could be a way to do it as well which again - is my prefered one

If the level is the problem, it might be worth checking the amp settings. A lot of amps and multifx systems have a configurable USB output level.

ISTR you have a Katana. You should be able to boost the USB output level in the system settings in BTS if the level is too low. You can also tweak the EQ and cabinet settings.

With the Zoom G1X Four (I had one for a brief period) it is possible to plug this into the PC directly with USB, and I would start there if you aren’t interested in singing. It’s a simple and effective setup in my experience.

You can also then plug the Zoom into the amp so you can hear it, or plug headphones into the Zoom for quiet practice/recording.

If you do want to sing then you’ll need an audio interface with two inputs, and then you can either connect the output from the Zoom into one input, and a mic into their other, or use something like ASIO4ALL to record from both the AI and the Zoom at the same time.

That is the more traditional route but IMO that is fiddly, more expensive, and, for home use, may not get better results than just plugging the multifx unit into the PC with USB and recording it directly.

Just because it’s the traditional method used, that doesn’t automatically make it “better”.

In fact, for many home environments, you will get a better result via USB as that will eliminate background noise and room acoustic issues.

Also, with USB recording, you don’t need to mess around so much with gain staging and mic positioning.

So, personally, I wouldn’t recommend this to a beginner if they have a system that can record direct to USB (effectively, the multifx unit has a built in audio interface).

If they already have a suitable AI, then line out to the AI is fine too, although there’s a bit more work involved as there are more gain stages to deal with and to balance.

If they want to record voice and guitar at the same time, plugging either the amp line out or Multifx line out into an AI is probably the best way. Which is best? It depends. The thing is to try both ways.

Once they are up and running, and familiar with how it all works, and what they want to achieve, that would, IMO be the time to experiment with amp micing, assuming they felt the need.

Thanks to all for your responses. Given me something to think about!

If you have a Roland Cube 20GX then you effectively have 5 pedals to play with already.

You have a clean channel. (no pedal)

You have a crunch channel. This will effectively be acting as a distortion/overdive pedal. Play around with the gain knob to control the level of overdrive/distortion.

You have a Lead channel. This will be acting as a more aggressive distortion pedal. Again, adjust the amount of distortion with the gain knob.

As well you have a chorus, delay and 2 reverb options (plate and spring).

This is the 10GX which I’m assuming is the same but with smaller speakers. 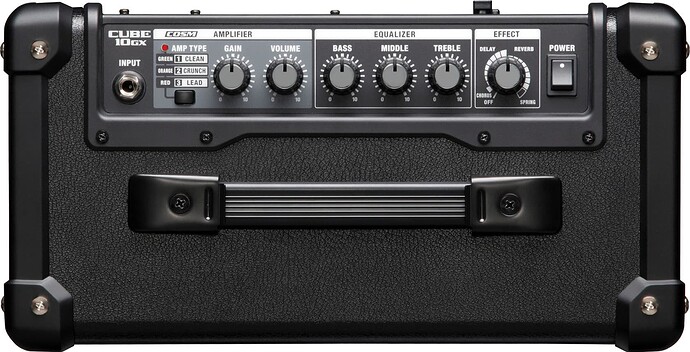 Yes it looks similar and yes does have clean and lead channels. The problem is I don’t really know what each of the settings do. Will have to test them out.

That gives you a large range of tones to experiment with.

@Matt125 Thanks for that. I have clean channel and a lead channel but not crunch. I have a button called memory (Solo).