Keep practising…I guarantee you will eventually get it. You already have fine vocals

Very nice, I didn’t detect any real problem with you getting the high notes, if you feel there was perhaps tighter trousers might help!

Keep them coming, looking forward to the next one!

Justin teaches, and you take his instruction, to play the first shape with fingers 1 and 2 plus the 3rd finger hammering-on, then the second shape with fingers 1, 2 and 3.
My way of playing this is to use fingers 2 and 3 on the first and the 2nd shape. For the first my little finger does the hammer-on task and for the second shape my 1st finger simply drops on to the top string.
Fingers 2 and 3 do not need to move at all.
Efficient, smooth and the notes continue to drone which fits the double drop D tuning perfectly.
Try it, see how it suits.

Let me know what you think

Your cover of that song was awesome. I read your comments before listening and was expecting far less. Be kind to yourself.

I’ve found with songs that are a bit high for my vocal range, the more I practice and sing them the more my voice stretches to that key (within reason).

@Richard_close2u to be honest, it’s a long time since I watched the lesson and started learning the song so I think I’ve just adapted my playing to what’s easiest for me which, as you well know, isn’t always the best way!
I’ve just nipped upstairs to try it and although my little finger isn’t the best with hammer ons, I can already hear that it would be less movement (always a good thing) and the open D would ring out nicely. Thanks for the invaluable advice and I’ll probably re-record at some point!

@tony hi Tony, thanks for listening. I’ve always been my own worst critic which can hinder me sometimes but I guess it keeps me striving to be better as well! I’ll keep this in my repertoire and hopefully the singing becomes less strained.

I thoroughly enjoyed this. I didn’t notice anything wrong with your vocals either. Loved your pick and strum embellishments. You sang this pretty song very well.

I also try the deep breath before trying for the high note as well.

Standing can help to hit high notes too. There are a few songs that I can only cover stood-up, as if I’m sitting down I can’t get the diaphragm control I need.

What a great thread! I just joined Justinguitar last week. I am returning to the guitar after a 20 year hiatus, and started lessons again. I learned to play by learning to play Neil Young songs. You might say I’m obsessed. I’m posting one of my favorites, Hangin’ on a Limb. I scoured the web for chords, but the results were inconsistent tabs and some of them seemed off. I figured most of this out myself, and it may be a little different than the original version. Happy to share if anyone is interested and can’t tell what’s what from watching the video. It may look like a difficult song, and that may be true for beginners, but even some beginners could learn this one. There’s just a couple of weird chords and changes, which as you’ll see I got stuck on. Still working this one out. If I look like I’m in pain, it’s because Neil’s melodies are often about 1 step out of my range, but I tried!!

Welcome to the Community, Richard. That how to make an entrance!

Loved your rendition of Hanging on a Limb, another wonderful song off a great album (Freedom). Sounded pretty good to me. I’d say I am an advancing beginner and that looks a little tricky to sing and play. Bravo.

If you’ve not yet discovered it, you’ll find Justin has produced a number of Neil Young song lessons.

Look forward to getting to know you here, hearing more music, and maybe you want to introduce yourself over here: #community-hub:introduce-yourself

Hi @rdeitz and a warm welcome to you, weird thumb 'n all!

A long hiatus from playing is a familiar tale we hear from many. Start at the beginning and work through the entire framework of JustinGuitar’s learning schedule to learn good technique, good habits and fill in the gaps and lost skills.

Good job on this, you have some fundamentals working.

One thing you point out is your thumb on the G chord.
For anyone unsure, the low E string is two semitones (equivalent to two frets) lower. So the root note G is found two frets higher than usual, at fret 5.

First - lucky you having such a flexible thumb that you can wrap it around with ease. Mine bends in the opposite direction mostly!

That said, I advise you to learn to play that G chord on drop D tuning differently. Here is your hand: 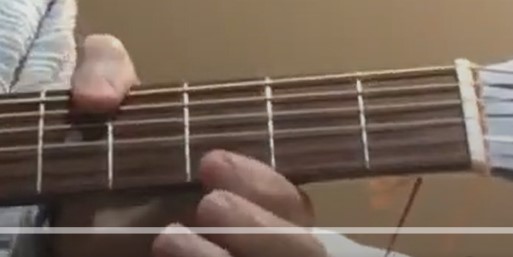 You have a thumb that can make that reach over but an very important part of playing that G chord in that tuning is to mute the A string. In this picture your thumb is touching it though at various times through the song it looked like the angle or the awkward position was causing your thumb to lift and reposition which means at those moments the A string would be unmuted and sounding out. Also, playing as you do causes a lot of movement in your hands, wrist and forearm so is somewhat inefficient mechanically.
Instead, try to learn to play it with finger 1 holding the high e string and finger 3 holding the low E string - and muting the A string underneath as you reach over for it. Another option with this fingering is to use your little finger to fret the A string at fret 5 also which gives a doubling up if the D note as it matches the open D string.
Here is Justin playing that second variation in the Harvest Moon lesson.

Hi Richard and welcome. A lovely introduction, boy I wish I had a thumb like that !

I’ve got a couple others in mind to try and to post. I also do the harmonica thing. If any of you haven’t tried playing harmonica like Neil Young, it is fairly easy to learn. Harmonicas have relatively few ‘bad’ notes.

If any of you haven’t tried playing harmonica like Neil Young, it is fairly easy to learn. Harmonicas have relatively few ‘bad’ notes.

Well it’s all relative I guess, Richard. I have a G harmonica at home but struggle enough to play and sing. Harmonica seemed pretty tricky in terms of being able to blow/breathe through only on hole, two holes etc. Maybe one day

@rdeitz
That was really good, I enjoyed that a lot Richard. Harmonica, now there’s something else to drag me off in another direction. I’ll maybe start a thread elsewhere in the appropriate section and ask for some info!

Yeah, understood about the harmonica @DavidP and @sairfingers. You have to have your open chords and changes rote so you don’t think about it during a song. But if any of you are at that point and are intimidated by the harmonica, I’d suggest giving it a try. It can be fun to try to play one on its own, without trying to do it while playing a song.

Great performance. Nice and relaxed. And the vocal was great as was the guitar playing.