Learn to play Hotel California by Eagles on JustinGuitar!

View the full lesson at Hotel California by Eagles | JustinGuitar

Getting a blocked on copyrights grounds for your country message on this. I am in the US, Is this getting blocked in Europe too? Ironically Don Feilders lesson is also blocked. Presumably this is the continuous overzelous reaching of Hollywood scraping for there monopoly of the past. I recall they recently tried to bring suit on a 50’s hotel, older than the song, named Hotel California in the Baja peninsula. Sad

All good here on the old continent.

I’m in Singapore. The lesson video works, but the YT link of original at the bottom shows “the video is not available”. And, the other Eagles song Take it Easy YT link show copyright problem. Randomly check some other songs, so issue with the YT links.

Thanks Mrok, and Razor! My first real need for a VPN

Good to know some can get it.

Any hints on amp settings? I’ve been tinkering with my fender amp but can’t quite get it right.

Doesn’t work for me, copy write US

Video blocked here in Florida. Anyone have any advice for strumming pattern?

In the Intro, the Tab on the lesson page is not exactly the same as what Justin teaches. The tab includes more notes. I’m struggling to figure out which is correct, or is it that Justin teaches a simpler version and the Tab is what is played by the group (sometimes).

This video contains content from UMPG Publishing, who has blocked it in your country on copyright grounds

Hi @neilff . Justin says in the intro that he’s going to play it how Don Felder usually plays it now, which is a bit simpler, and then show the original recorded version. Did you watch the entire video? He starts that at ~ 15 minutes.

Other than that, the tabs come from the publishers and Justin will be editing them all in time so they match his lessons. I’m sure that’s a huge project so it will take awhile. 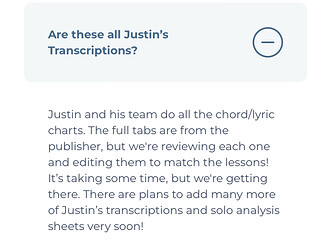 Hi Mari63. Thanks very much for your reply. I was so impatient to start the Intro that I didn’t watch the entire video! I now understand my mistake. I will try to learn the “easy” version and then maybe bring in some of the more complicated notes.
Great to be a member of this forum!

You can get around the block by using a VPN. The lesson and the Don Feilder video are still both blocked for me in the US but will work when I set my VPN to Canada.

…because of copyright things I won’t post it … .but the first time Am must be B7 2x and then Em 2x…
Greetings…

@roger_holland Yes, I see that, the chorus does switch around from section 1 to section 2.
C, G, B7, Em
C G Am, B7
This is in one of Justin’s songbooks - I will try to remember to check what is noted in the chord progression there.

I’ll edit my post as well, now that it’s all right to avoid confusion

Nothing to see here!!