Finally I do it! I’ve wroten my own learning log!

I would prefer not to repeat the introduction post I wrote… two months ago (yes, I know, two months!, crazy busy times) so I’m adding a link to it just here. As a quick summary, my name is Javier, I’m from Spain and began to learn guitar (with no great results) 20 years ago… This time is going to be the good one.

- Long-term (or why am I peeling my fingers off if I could be resting on the couch?):

Setup, because GAS is in the air…

My first guitar was an old (20 years) Ibanez GIO starter pack. I’m very related to this one because it was with me since the beginning… but it is terrible. Yes, I know, “you are the bad one, not the gear…”, but in this case, I found many problems that made me prefer to play it unplugged. On the other hand, I learned a lot by fixing its sloppy wiring, upgrading the electronics, leveling the frets, carving a bone nut… Today it is playable, but I’ll probably change these pups in the future. 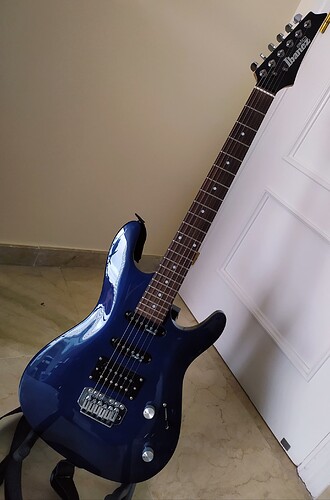 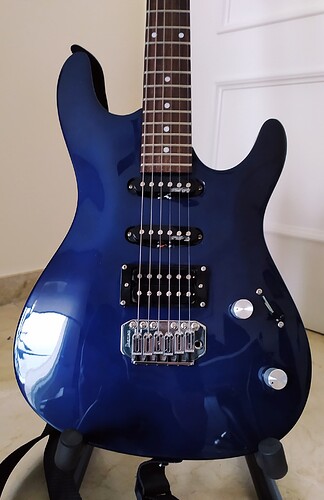 The second one was the present that my wife made me on my 40th birthday and it is the first DIY guitar kit I ever made. I can see plenty of errors, but I really love this one.
Probably many of you will think it is an heresy, but it is a telecaster style with fender texas and a belly cut and armrest (my shoulder pain approves it). 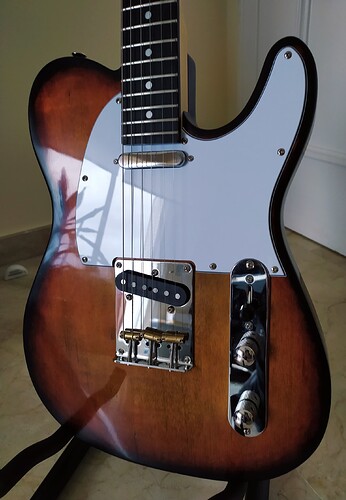 Currently, I’m building my second kit (a gibson es-335 style). I have just begun with the clear coat, so it will be fully assembled in about two months. So I’ll have a NGD soon 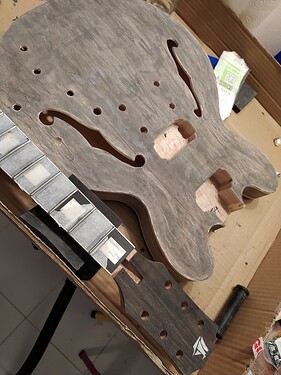 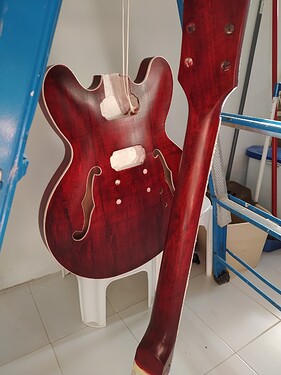 Where I was before starting this Learning Log in June 2022

At this moment I have no problem with most of the chord changes. The F****** chord is still a bit hard, and the changes to it are slower than the rest of the changes, but I am improving it.

I know the 5 pentatonic scale patterns, but (there is ever a but) I feel I need to be more solvent in finding the notes on the fretboard. I locate the patterns by locating the root notes so changing from one key to another implies some difficulties

In the following months, I will revisit the lessons in modules 1 and 2 and raise my pass boundary.
I want also to do more effort to play songs using as a backtrack the original recording.

I’ve just seen the last grade 2 video so I’m officially in my consolidating phase. It is nice to see that Justin, in the video, has the same idea of “keep here for a while and try to chew all you have learned” that I had

On the other hand, currently, I’m pretty focused on “Wish you were here”, trying to learn the whole song and give it a try to the looper. As is a basic song that most of the people here know I think is a good candidate to be recorded in a near future

Great start to the log and wow, making your own guitars! You need to be pretty handy to do that.

It would be great to see a share from you in the AVOYP section soon.

I ever like to build things and the electric guitar gear brings me a lot of opportunities (pedalboards, pedals, amps guitars…). These both are kits so the most challenging things are solved

Probably the next build will begin with the plans

Great log and loved the pictures of the guitars.

It must be an amazing feeling to play a guitar you’ve crafted and built Javier. You’ve got some great skills, a clever way of writing and setting out your goals. Your sense of humour that will be a great asset along the way. I look forward to more.

Maggie, to use the gear you built is an incredible sensation

Not only is your work and effort thus every piece has its own soul. For example, I never was really interested in telecasters but now I love it

A great plan, Javier! Stick to it and you will have a pleasant journey

Hi Javier,
Nice read and it must be great to put together your own guitar like this… lots of fun with it

Love the log, Javier … the progress, the guitars, the plans.

I know the 5 pentatonic scale patterns

This did stick out for me, being at grade 2. In addition, to learning the patterns and being able to move between, one needs to be able to use them in a musical way. You mention a looper, which provides a wonderful way to record rhythm backing and then improv over the backing. Like many my knowledge of patterns exceeds my ability to improvise using the scales, so a little bit of the ‘pot calling the kettle black’. I’d encourage working on that if you haven’t. Record and share in #record-yourself-progress-performance:audio-video-of-you-playing to get encouragement and feedback.

This did stick out for me, being at grade 2

Well, I’ve been messing around with my guitar for some years and pentatonic was one of the things I carry in my backpack. Anyway, as you say one thing is to know the patterns and another to be able to make music with them…

I’m going to write a little update (the first one!) in the log