You’ll find that the sync of video and audio is not as hard as it sounds. You just have to make sure there is an audio track on the video to sync with the audio in the DAW.

Depending on your setup there are many options.

If you are interested perhaps start a topic in #gear-tools-talk:hardware-software-recroding to discuss recording and syncing audio and video. Start off sharing the gear you have. I know you use OBS and are playing an electric. What would be of relevance would be audio interfaces, PC/laptop (particularly the operating system), and camera

The easiest way to sync is to add a 1 bar count of a click track or drum beat. Most DAWs support video input (I use Reaper). So you can record your audio at the same time as you record in OBS. Drop the OBS video into the DAW and align to the click track. The waveforms are very clear so a doddle to line up. You can then mix the track and get the levels where you want them. Mute the video track and then export original video with the mixed sound tracks.

That’s a starter for 10 but as David says, if you want to pursue this create a topic on the subject as there are many ways to do this and many DAWs. Above is just a taster to maybe pique your curiosity!

I have access to an Adobe premiere pro license through my work.

Premiere Pro definitely has auto multi track audio sync. You’ll need to do something like what @DavidP and @TheMadman_tobyjenner suggest and record audio with your video source. And clap, or count-in clicks, or what I usually do which is totally forget to do that and line up the audio waveforms of the start manually (which is more annoying but not that hard either).

Sounded cool and badass! Will be hard to keep it at a similar level with all the remaining 49 songs

It’s too late, I’ve been messing around with Audacity and Premiere Pro all day, send help!

Song 2: Every Rose Has Its Thorn by Poison

Time for song 2! I’ve been playing this song since the stuck 3&4 lessons in grade 2 but I when I did it for this I wanted to make sure to play it with a backing track.

Sound:
Eb tuning and I’m using the my Boss Katana’s acoustic guitar simulator (who knew it had one), which I think sounds pretty good. I initially wanted to play this with my acoustic but I have no way of getting a clean recording of it. So I found these awesome live sets from Boss’ website that included an acoustic patch: Songwriting Collection by Rafael Bittencourt | BOSS TONE CENTRAL

For those who are interested I used this backing track I found on YouTube: Poison- Every rose has its thorn (guitar backing track bret michaels voice) - YouTube

So here is Every Rose has Its Thorn! (Advice and feedback always appreciated and welcome!), also for those who want to listen to the previous song there is a handy table on the first post with anchor links!: Congrats on completing the second song on this project, Alexis. Enjoyed the write up and the learning you shared. Your play and tone sounded good to me.

I notice every now and then your hand pauses at the bottom of a strum. Didn’t seem to throw you off, but maybe worth persisting with keeping the hand moving continuously.

Well done and with you well for the next song!

Well done Alexis, that is a really solid play along, all your work is worth it.

That was a tasty treat Alexis. You played it really well. Nice and clean, great strumming and chord changes. I didn’t notice the pause but then I’m not a pro like the two above me.

Thanks for the kind words everyone!

I notice every now and then your hand pauses at the bottom of a strum.

That’s exactly what I noticed when I first started playing with the backing track. It’s a bad habit I acquired by playing it without a metronome or the backing track. Practice has made it happen less and effect my rhythm less but it’s still one of those bad habits I have that’s hard shake.

That’s right! In my rhythm practice A lot of effort was put in tapping with the metronome and thankfully it’s something that did catch on. It was a lot harder to get down than I originally thought because I was used to tapping my foot on down strums and with and as you know with 1/16th strumming there’s some downs on the “and” too.

tapping my foot on down strums and with and as you know with 1/16th strumming there’s some downs on the “and” too.

Yeah, I’ve found that tricky whenever I have made any kind of effort to work on 1/16th strumming with the 1e&a count. Just the basic simple up and down is a challenge, before one starts skipping and throwing in accents

I see you’re discovering some Premiere features too

Yeah, it’s so much easier than I expected it. I’m sure I could go really deep into it, but just syncing video and adding basic title cards is really easy to do. I’m posting a regular AVOYP soon where I used it to slowly fade the sound at the end of a song. Really cool, so much you can do with that software.

What a terrific project Alexis, food for thought as I get closer to my own Grade 2 consolidation period.
As for the song and production, absolutely outstanding, keep up the good work and I’ll be keeping a close eye out for your remaining songs!

Nice of you to say Mark.

I mention this a little in my first post but what inspired me to do this is that rut busting consolidation video from the end of Grade 2. This is coupled with the fact that post Grade 2 content seems to be more structured around learning whatever it is you want to learn rather than prescribing a specific routine with specific songs.

I wanted a long term goal (years) so that regardless of what I was doing at a particular moment I’d have something bigger that I was working on. The rock song book fit the bill since I wanted to get deep into rock, it’s structured from easy to hard, and if I do a song a month (doubtful that I can keep that cadence) it would still take me over 4 years to get through.

Anyway, that’s all say good luck with your own consolidation/post grade 2 journey!

I have a thought of doing something like this when I get to the end of Grade 2. The problem I have, and have had through most of Grade 1 and 2, is that I don’t know or haven’t heard the songs in the books or the lessons. For example taking your original list of 15 I’ve heard of five and heard two.

This means that over the last couple of years I have been trying to play songs that I don’t know and have not heard, and is some case don’t like! Saying that there have been a few that I use for practice that I quite like now which I wouldn’t have thought of. There are a few though that I have heard before and use for practice.

When I initially bought the Rock song book I was in a similar situation where there were def some songs in there I knew and loved but many I wasn’t familiar with. Luckily in the product page for his song books there is a spotify playlist link so I added the playlist and started to listening to it on shuffle while doing house work or going on errands.

Now I’m very familiar with all the songs and I was surprised to find that some songs that I thought I didn’t like I actually really liked. Especially when listening to them in the context of the guitar parts. I’d think “Oh that part would be cool to learn”. I don’t remember if all of his song books have spotify playlist links but I know the rock one and the acoustic one do. 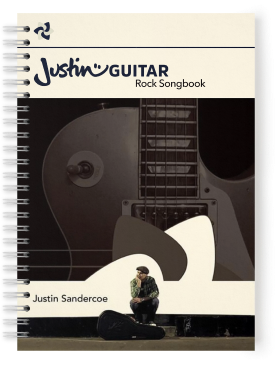 You know what they say - Rock N Roll is all about attitude - and my Rock Songbook will help you channel your inner rockstar! You’ll learn to play 50 Rock songs spec... 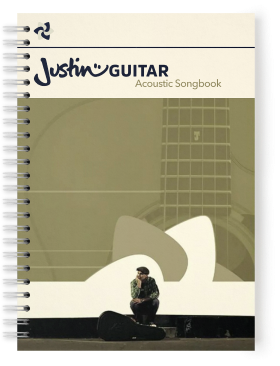 Hi Alex. Just watch this performance again and I have a question for you. How are you getting that very clean mute? You seem to be only using your strumming hand to mute. Is that correct?
I’d love to get my muting this clean so any advice be great.

How are you getting that very clean mute? You seem to be only using your strumming hand to mute. Is that correct?

Hi Colin. So I’m muting with the palm of my strumming hand but also loosening my grip on the frets a little with my fretting hand.

I learned later from a Metal Rhythm book I’m going through that it’s better to try and use both hands to mute completely and to both loosen and try a full mute. I tried this in my last AVOYP here: Whips and Chains - Troy Stetina (around 30 seconds there is a part with rests that require mutes) and I think I’m more successful.

Nice project you have here Alexis

It is a nice way of consolidating. So keep up the good work