Hi everyone! Not 100% sure how this all works, this is my first post, so hopefully I am doing it correctly, if not, sorry!

Been on the site for a while (and following Justin Guitar on YouTube for years) and thought it was finally time to introduce myself as this is, from what I have read and seen, a fantastic community that I would love to be a part of

I started my guitar journey at 14, in the early 90s, when I took a few in-person lessons, that was until the guitar teacher wanted me to try singing, but unfortunately I was so embarrassed at that age about singing (still am lol!) that I refused to go back. One of my biggest regrets…

I kept my acoustic guitar with me through into my early twenties but very rarely picked it up aside from learning a couple of common riffs, like Under the Bridge and the beginning to Stairway to Heaven.

In my mid-late twenties, I started to have periodic goes at learning guitar with more earnest, always using an acoustic as I had read you should learn on an acoustic before switching to electric (although I now don’t think that was particularly good advice). I never progressed from a beginner and my learning essentially consisted of searching for tabs on Ultimate Guitar and watching song tutorials on YouTube if I could find any (in those days).

Although I love all good music regardless of genre, I am intensely drawn to metal. From Slayer to Skeletonwitch, Pestilence to Putrid Pile, I love it! It was, and still is, the reason I pick up a guitar. However, I eventually realised that acoustic guitar alone really wasn’t allowing me to explore this genre properly. Thankfully, it was about this time that I was lucky enough to be given an old, beat-up, slightly rusty, warlock-shaped axe from a mate who was similarly into both metal and guitar. I worshipped that thing!

Getting an electric was like opening the door to a whole new world of awesome! I could finally start to get tones that sounded vaguely like I had always wanted to produce. Metallica and Slayer tabs were my bible, although, at best, I could barely struggle my way through a few palm-muted chugs with the odd power chord thrown in…

…And, as it happens, I am still in a similar place. Despite what are now many years of messing around with guitar and learning or, more accurately, attempting to learn a huge number of songs, I have effectively stagnated in my progression… Or at least that’s how it feels! I am sure I have developed some terrible bad habits and technique that is limiting my progress. I always seem to hit a wall that I can’t seem to get past…

And that is where JG comes in! I have enjoyed Justin’s videos for many, many years, dating back to the earliest ones which I came across whilst scouring YouTube for song tutorials. I have always warmed to Justin’s approach to teaching guitar and found his videos incredibly useful, not only as a guide but as an inspiration. As such, I am excited to use his course as a light in the dark and finally make some headway to becoming a proper guitarist!

Having now created a daily practice routine that has been maintained for 6 or 7 months, I feel confident this is sustainable over the long term and can stick to it without my previous hot & cold approach. Therefore, I committed to the JG course about 2 months ago and choose to start right from the beginning, as there are so many aspects of guitar that I have just ignored. I am about to start the course on power chords, which you won’t be surprised to hear I am very excited about! \m/

I have a couple of guitars, but mostly play my Solar GC1.6FAB which I absolutely love, and have two Boss Katana amps which I also love - two so I can have a friend come play… not that that actually ever happens lol! 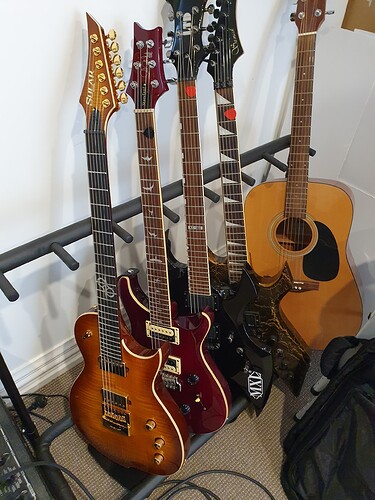 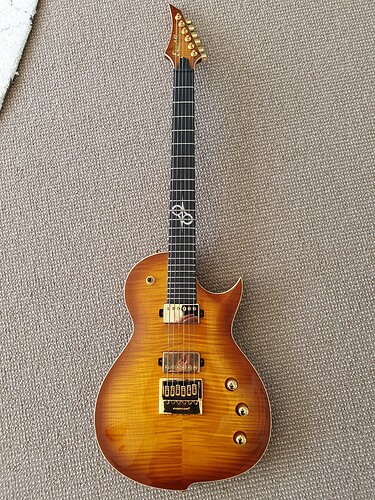 Looking forward to getting stuck in and (finally!) improving at guitar! Also, spotted a couple of other metalheads on here so keen to connect!

Schweet! What a guitar!

Welcome to the forum from another Kiwi, theres a few of us about, dont mind a bit of metal but probably not quite so much as you!

Thanks Rob! Great to know there are a few kiwis already floating about here!

so hopefully I am doing it correctly

You are absolutely doing it correctly. Welcome to the forum. I’m married to a kiwi and am particularly biased in favour of any one who comes from the land of the long white cloud. \m/

Look forward to hearing more from you.

Hello Jeff and welcome to the community.

Great story and you have some tasty looking guitars there.

Hi Jeff, welcome to the community! Thanks for telling us your story. What a cool collection of guitars! Have fun and good luck, nice to have you here!

Welcome to the community Jeff, sounds like you’ve already got a fair bit of skill under your belt!

I was born in NZ, moved to Australia a long time ago though so I’m more Aussie than kiwi now

thanks JK! Us Aussies and kiwis (or some hybrid of the both) like to give each other plenty, but we’re just one big family really eh

Nice to meet you

,…through a more structured way it won’t be long before you play the stars from the sky…I’m looking forward to a video of your progress…have fun

Welcome aboard!
Great to hear you’ve got your plan sorted - looks like you are starting to suffer from Guitar Acquisition Syndrome as well

Thanks @roger_holland & @AndyTake2! You are all very kind! And yes @AndyTake2 I am working on an acute case of G.A.S. for sure!

Again hi Jeff,
Watch out with GAS, there are figures walking around here who like to encourage this and before you know it it’s an addiction … I would never do this myself of course

Hi Jeff, and a warm welcome to the community

.
It seems, that guitars have - in some ways - always been a part of your life. Even if it was not always easy to follow a structured learning path - or maybe it simply was not the right time for that. Jumping from one song to another, figuring out how to play it, having some fun with it - that’s also a great thing to do

. Buying an electric as a metal fan was definitely an important step in the right direction for you. And I’m quite certain that following Justins course and being part of this community will help you, reaching your goals.
I wish you lots of fun

Thanks for the heads up, Rogier! I’ll keep my eyes open!

Thank you so much Nicole, really appreciated your kind words!

You are right, guitar has always been there since my early teens, even if just a quiet voice in the back of my mind. Reading others stories, that seems to be a common theme. I’m glad to not be alone on that!

Thanks again for your warm welcome

Hi Welcome what a great set of guitars

Welcome Jeff. Hard Rock and Metal are why I got into guitar, glad to see another fan. Justin’s structured approach is really great so you’re definitely doing it right.

P.S. @roger_holland is right, but clearly you don’t have enough guitars

@alexisduprey I have been enjoying seeing your posts and following your progress, finding them to be a great inspiration!

Thanks man, you should start recording some of you’re stuff. We can inspire each other! Lots of benefits to it and it gets easier and give more confidence every time you do it.