Record Yourself - Progress & Performance 📣 Audio-Video of You Playing
TheMadman_tobyjenner September 11, 2022, 11:55am #1

Been a while since I last posted a chapter in The Madman’s New Diaries so here’s the latest instalment. Handwritten this time I’m afraid.

I have really been struggling to get back into practice and playing, since the family went back to the UK a week ago. In the 5 weeks they’d been over, I’d hardly played at all, apart for a handful of days prepping for OM X and the odd 5 minutes here and there. Virtually nothing.

Starting again or trying to start again I found that some rust had well and truly set in. Finger flexibility had been lost and a few joints were shouting out, asking what the hell I was doing.
A visit to the Community was overwhelming with the volume of posts, as was my Time Boxing Schedule I’d been using Spring and early Summer. I was heading to a lost Mojo moment but it wasn’t the mojo that was missing, I just had to systematically plan a sensible restart.

So a new schedule was written, with the prime focus on stretching, dexterity and revisiting the various scales and scale exercises I should know but my hands had forgotten. An added splash of Grade 3 Modules and a return to the Truefire Blues courses I’ve been working on.

So in amongst the modal meanderings of straight and mixed up scales and melodic patterns, I dropped on a few interesting phrases and possible passages. Opened up my Elevated Jam Tracks folder and a couple of days back started some slow noodles over a good number of 10 minute BTs. As usual I kept pulling out tracks in the Key of A and D a mixture of tempos and styles but thought why do I keep riding the same old nags ? Time for a change.

So pulled up a selection of EJT Seductive Blues Ballads and mess around in Bm. In the end I decided on this rather melancholy piece that fitted my previous mood. Dropped it into Reaper. Lopped about 8 minutes off and cut it down to a Tisher friendly 2 minutes.
Plugged the SG in the POD Go, having previously found a desired tone and preset, while playing over a myriad of 10 minutes loops. Brought up OBS and went for it.

Still being rusty this was take 3 and there’s nothing elaborate. Its an interval exploratory, looking for space and links. The odd slide and vibrato and just the one bend to finish. All inspired by @DavidP blowing his cobwebs off and realising I needed to do the same. 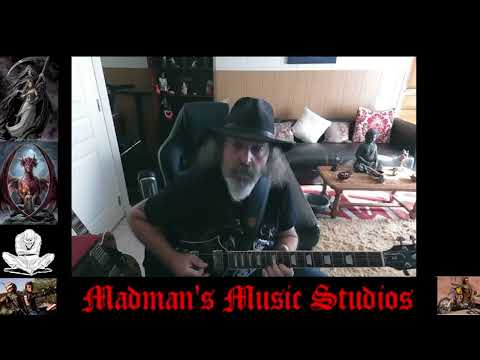 As I say nothing special, nothing fancy. Just a chilled Sunday morning recording impro to get the fingers working.

Just need to cut and review my song list and get some proper work in the pipeline.

Thanks for listening, feedback comments welcome as usual.

Nice noodle. Beyond my abilities to offer any improvement advice.

Definitely a chilled Sunday morning improv. Perfect to get going. You will be back in the saddle in no time.
I am going to be away cruising for close to three weeks and I know my hands will be stiff when I return to the guitar. I wonder how big a setback not playing will be.

Good job, Toby, your play worked well over that truly melancholic BT. Sure the hands and fingers will cease their complaining soon.

Well done Toby. The thing that stood out for me here Toby was the breathing space you left between phrases. Very effective but hard to do as it’s all to easy to get carried away and try to fit in as many notes as possible.

Loved it! Like said above, not experienced enough to give useful feedback, but really liked the complex simplicity of it, if that makes sense!

That was a nice haunting meander, Toby, quite enjoyable to listen to.

Toby I think that was great, for such a break you seem like you came back even stronger. I really enjoyed it and nothing was missing here for me, and really loved your bends!

Ah, it’s yourself.
Hello Toby my friend.
Stretchy-finges, flexi-sinews and all that malarkey.
I wouldn’t mi d a glass or two of whatever red you"ve been drinking. With a little fromage on the side.
Tasty.

That was super good Toby. Definitely a chilled, somewhat melancholy vibe. Resolved really well at the end too.

Do you do any songwriting? That noodle wouldn’t be out of place as a solo.

I get the feeling from reading a few of your posts that on the old forum you were able to read & watch everything. I wasn’t there but it seems like it was like a country pub, where everyone knew everyone. I don’t think it’s possible to read and catch up on everything. I tried for a while, then the volume increased again and it got too much.

To manage I mainly use the “latest” page and just look at the past couple of days. I’m online a lot but when I go away for a few days there’s no chance of catching up.

On the guitar stuff, you’ve got strong mojo. Especially based on what I just listened to. Don’t be too hard on yourself, pick up the guitar every day, play stuff you know and when the inclination strikes, then learn some new stuff. At least that’s what I reckon.

Hi Toby, I don’t see any reason for “dark thoughts”. We all need a break from time to time and what could be more important than spending time with the family? Pretty normal that there might be a light corrosion in fingers and bones…
I can’t give a substantiated feedback, haven’t even reached the blues module, but for me, it sounded great as always. I like the melancholy and the well proportened breaks in it. Keep on playing, for a newbie like me, you are kind of a model how to progress on this long, long road (hope not to nowhere…).

Thanks for the listen folks.

It was a nice work out and good to expand a couple of melodic lines I was experimenting with. They did not quite work with the Major modes and seemed to suit Aeolian best of all. But opportunities to tweak them slightly over brighter backing tracks have opened up, which is the good thing about improvising. Play what you know or what you discover but experiment with it, extend it link it.

I’ll respond to a few specific comments later in the day as little chance yesterday. Three hours on the tractor mower yesterday, left me shaken but not stirred, Mind you it had been about 2 months since I last cut the grass !! Anyway time to walk the dog and I’ll return later.

Hi Toby.
I hope you and the dog had a good leg-stretch and sniff about.
Woof woof.

I’ve spent a few hours this morning running up a few ideas prompted and inspired by your first lick and its first variation (call & response).
The backing track is in B minor in 6/8. I created a similar backing in Guitar Pro.
I can share all tracks if you have GP, I don’t recall if you do or not.

I’ll be back - soundcloud is messing me around

Hi Toby, welcome back! I am very glad to see and hear you.
Great and sad improvisation this time.
And a chic right bend at the very end!
Keep on (rocking) bluesing,
Leo

All I could think was that this belongs in the opening of a movie. Had a feel of captivation.

All very intriguing but the tracks seem to be off line now. Will check again later.

Hi Toby,
I took in your production and found it mellow and relaxing. Good steady lead work there mate. Pretty nice tone on the guitar too. It comes down to the final verdict which is a job well done!