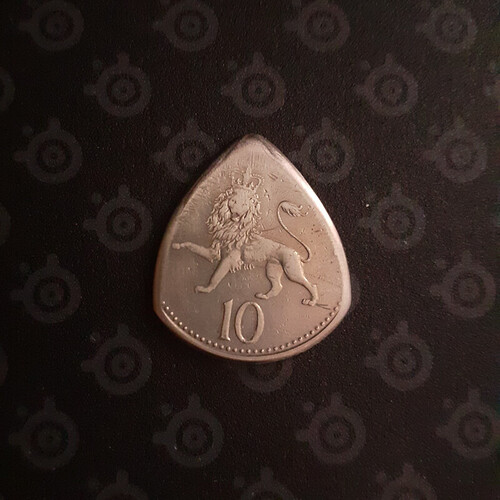 A coin is good enough for Brian May, so I thought I’d give it a go myself. I had to use a 10p since I don’t have any sixpence coins laying around. I didn’t really get on with it because of the shape, so I wondered how it would perform if shaped like an actual pick. The above is the result of my efforts.

It actually worked surprisingly well for both picking and strumming. Sounded great for rock, metal, and anything with a bit of distortion, though not so great for clean sounds as you can clearly hear if the pick slides at all on the wound strings. Despite the polished, rounded edges I’m guessing string life will also be an issue if used regularly.

So does anyone else have experience with metal picks… home made or store bought? How do you find them? Do you find yourself changing strings more often?

I have a few metal picks including one silver and one gold plated which my brother-in-law gave to me when he gave up guitar.

I never got on with those but, IMO, they were not the right shape for me.

More recently, I purchased a couple of metal picks made from coins:

Coin Plectrums [image] [image] I picked (pun intended) these up from Highland Plectrum Co recently simply because they looked cool. They sell coins which have been machined into a pick shape. The silver coin is an English sixpence (like Brian May uses) and it’s the year I was born. The other one is a 5 Yen coin. I got this because I spent some time in Tokyo not so long ago, and I was aware of the cultural significance of 5 Yen coin. For those that don’t know, the main religion in Japan …

Apparently, the Feng Shui coin is very good, so I might get one of those to try in the future.

The sixpence is OK, but too small for me. The 5 yen coin is much more comfortable and the hole in the coin helps with grip. Both are a much better shape for me, and are useable for single note lead-line type work.

TBH, I’ve not tried using them for strumming and I suspect, as you do, they may have an impact on the life of the strings.

Just a word of caution guys!
Under the Currency and Banknotes Act 1928, it is an offence to deface a banknote by printing, stamping or writing on it . The Coinage Act 1971 also makes it an offence to destroy a metal coin that has been current in the UK since 1969, unless a licence to do so has been granted by the Treasury.
You have been warned.

Sixpence are no longer legal tender in the UK so Brian May is safe!

Can send Euros if anyone is worried

Have a whisky bottle full of shrapnel !

Haha, yes, I’m aware of that law. I’ve always wondered about it since we have those machines at theme parks and zoos which crush copper coins and stamp the attraction’s name on them. I guess they must have a license! Can I count on you guys to keep my secret?

It’d be a sure fire way to scratch the living hell out of my guitar (no pick guard!) with my sloppy strumming!!

As much as you can spare please

I think they’re useful if you enjoy the sound and feel they produce. Certainly not just a novelty for someone like Brian May - it’s what works for him.

I don’t know anyone else that uses a metal pick though. For me I’d be worried it will kill strings and maybe sound a bit too bright I’ll stick to regular picks.

I feel like metal picks will probably drastically decrease the life of your strings, would it not?

Most likely. There certainly isn’t going to be any give as it hits the strings, and the strings are going to be softer metal than the pick (or coin).

But perhaps it depends on what you’re doing with it? And perhaps on the pick itself? Many of the metal ones I’ve seen for sale seem to have quite sharp edges, so I can imaging them cutting right into the string, leaving tiny dents with every strum. The one I made myself has rounded, polished edges, a deliberate choice on my part. With light to medium strumming, it feels like it kind of glides across the strings rather than digging in, so perhaps the extra damage is minimal?

I’ve been using it for some pretty heavy rock/metal so far and all is well. But it’s only been a few sessions, so time will tell. (I don’t use it all the time either.)

I’ve tried them, but never got on with them. Your mileage may vary, of course.

My wife bought me a metal guitar pick made from a half dollar piece from the same year I was born. In my case, I have not used it much because of the fact that it was a gift to me that I really like. It came polished very nicely and I would just as soon keep it looking nice.

There are lots of players that use coins. One of the players I enjoy listening to is Phil Collen of Def Leppard.

What a great gift! I don’t think I’d use it either, to be honest. Metal or not it’d get scratched up eventually. Of course some would say that’s part of the charm, that it makes it personal, but I often prefer to keep things pristine. (Got annoyed about scuff marks on my new guitar a few weeks ago, despite them being inevitable unless you never play it!)